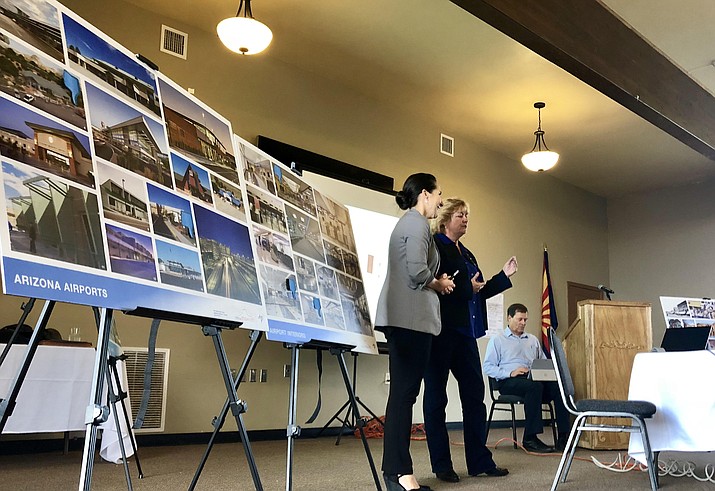 Consultant architect Sandra Kukla, left, and Prescott Airport Director Robin Sobotta present information to the audience during an open-house meeting Tuesday, Oct. 16, 2018, at the city’s Centennial Center about the future of the Prescott Airport. The presentation included examples of other airport terminal designs around the country. (Cindy Barks/Courier)

Fewer than 300: That is the estimated number of ticketed flights to Los Angeles or Denver standing between the Prescott Regional Airport and its coveted 10,000-passenger mark.

Based on current usage and already-booked tickets, 9,728 passengers are expected to board commercial flights from the Prescott Regional Airport in 2018.

That would be just 272 short of the 10,000-enplanement mark – the magic number that would put Prescott into a new category of airports.

The stakes are even higher this year because of 2018 federal-grant cycles.

With the city currently on the fast track to get the terminal construction started by late 2019, (See related story), Sobotta said that additional money could make a significant difference.

Among the messages that emerged during two airport-related meetings on Tuesday, Oct. 16 was that flying locally would bring more money, more improvements, and possibly more flights to the Prescott Regional Airport.

To reach the 10,000 number, the city plans to work over the next two and a half months to raise the passenger numbers.

The 9,728 enplanement total for 2018 is mostly good news for the Prescott Airport.

Sobotta and other officials pointed out on Tuesday that the new United Express flights from Prescott to Los Angeles and Denver are exceeding expectations.

When SkyWest Airlines submitted a bid for the city’s Essential Air Service (EAS) subsidy contract this past summer, the airline projected load factors on its Prescott flights at about 44 percent.

Less than two months into the new commercial United Express flights, though, Sobotta reported load factors of between 70 and 75 percent.

After a successful inaugural flight in late August, Sobotta said, “What we didn’t expect is how full all of the flights will have been since then.”

SkyWest spokesman Layne Watson agreed that the airline is pleased with the Prescott flights. “We’ve certainly been happy with the launch,” he said.

“We’ve continued to evaluate the demand, and we’ve been pleased with the reception of the service,” Watson said. “It seems that the demand is there (for the Saturday Los Angeles flight).”

Booking is currently available on United.com for the new Saturday flights in December.

By all indications, the flight numbers are trending upwards, Sobotta said, adding that if the airline use continues as it has been going, 2019 could see a total of more than 25,000 enplanements.

While that would be beneficial for coming years, Sobotta stressed the importance of reaching the 10,000 mark in 2018.

Because work is already underway on the design of a new airport terminal, Sobotta said Prescott is well-placed to capitalize on a new $1 billion pool of federal money that became available this year for smaller airports.

“They’re looking for shovel-ready projects,” she said, adding that Prescott is among a relatively small group of airports nationwide that would qualify.

In coming years, Prescott’s project is sure to face more competition for the remaining federal money, Sobotta added.

While the city’s 1940s-era terminal has been serving the purpose for the new flights, Sobotta said a new, larger terminal is necessary in order for the commercial airline service to grow.

The city is looking at several options for making up the 300 or so enplanements in 2018.

Community Outreach Manager John Heiney said he is working with travel agencies about possible charter flights from the Prescott Airport. Those numbers would all factor toward the airport’s total enplanements, he said.

During the luncheon for regional leaders, Dewey-Humboldt Vice Mayor John Hughes suggested that flights to locations such as Las Vegas or San Diego would be more popular with his constituents than the current flights to Denver and Los Angeles.

Yavapai County Supervisor Craig Brown agreed that a flight to Las Vegas would likely be popular. “Las Vegas is where people want to go for vacation or long weekends,” he said, adding that a Las Vegas flight would also be used for attendance at the many conventions that take place there.

After the meeting, Heiney said the city is looking into charter flights to Las Vegas, and should have more information available on the flights within about a week.

Meanwhile, Sobotta said the city also is encouraging residents throughout the region to use the Prescott Airport when possible. She said a flight load factor increase on the Los Angeles and Denver to 80 percent would be sufficient to reach the 10,000-enplanement mark.

And Watson noted that continued use of the flights would be the best way to bring more regular flights to the airport. “That is what really establishes future opportunities,” he said.