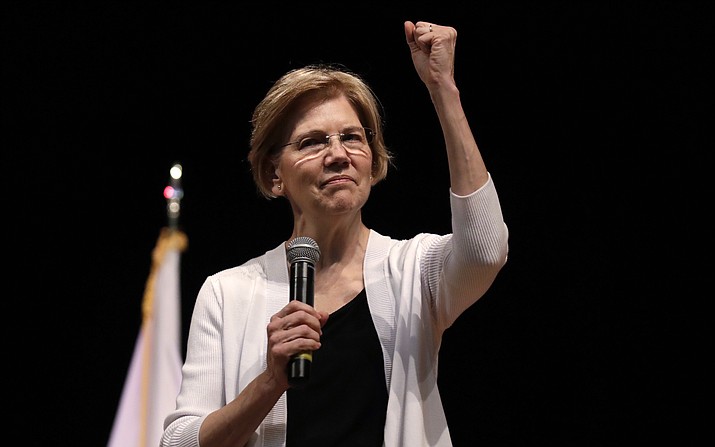 OKLAHOMA CITY — The DNA test that Sen. Elizabeth Warren used to try to rebut the ridicule of President Donald Trump angered some Native Americans, who complained that the genetic analysis cheapens the identities of tribal members with deeper ties to the Indian past.

Warren was born in Oklahoma, which is home to 39 tribes and where more than 7 percent of the population identifies as Native American, one of the highest proportions in the nation.

But she's not a member of any tribe, and many Indians take exception to anyone who claims to be part Indian without being enrolled in a tribe, especially for political purposes.

"It adds fuel to that misconception that I can go out, get a DNA test and then, boom, that's all I really need," said Brandon Scott, a Cherokee Nation citizen and the executive editor of tribe's newspaper, the Cherokee Phoenix. "But the facts of the matter are you need a lot more than that."

The nation's 573 federally recognized tribes do not have a single standard for determining membership. Tribes such as the Cherokee Nation use lineal descent, meaning a person is Cherokee if an ancestor is listed on an original tribal roll regardless of their amount of Indian blood. Descendants of black slaves the Cherokee once owned are also members of the tribe.

DNA tests are not typically used as evidence to determine tribal membership.

The genetic results released Monday provide some evidence of a Native American in Warren's lineage, though the ancestor probably lived six to 10 generations ago.

Native Americans also resented Trump's continuing use of Indian heritage as a means to mock Warren, a Democratic senator from Massachusetts who is widely expected to run for president in 2020.

Trump's references to Warren as "fake Pocahontas" are particularly offensive because they show how pop culture has glossed over the treatment of Native Americans, particularly women, said Chelsey Branham, a member of the Chickasaw Nation.

"It's a sore topic to begin with," said Branham, a Democratic candidate for a state House seat in Oklahoma City. "Then on top of that, using it as a derisive term to put someone down, it's a racial slur. It certainly was offensive to me."

Many Oklahomans take pride in their Indian blood even if, as in Warren's case, they cannot trace an ancestor to the original tribal rolls.

"Even in 1907, people were proud of that Indian heritage," said Bob Blackburn, executive director of the Oklahoma Historical Society, referring to the year Indian Territory was dissolved and became part of the new 46th state of Oklahoma.

Opinion on Warren was not monolithic. The chief of the Eastern Band of Cherokee Indians issued a statement Tuesday saying that the senator had not tried to "appropriate" Indian culture. The tribe described her as an "ally" who had sponsored legislation to prevent Indian suicides, to identify missing and murdered Native American women and to help tribes reacquire lost lands.

Questions about Warren's heritage first emerged during her race for the Senate in 2012, when reports surfaced that she listed herself as a racial minority in an academic legal directory. Trump then made the "Pocahontas" jibe a laugh line at his rallies in 2016 after Warren became an outspoken critic.

Warren acknowledged identifying herself as a minority in the directory for nearly a decade. At the time, she said she listed herself as having Native American heritage because she hoped to meet people with similar roots.

She was also listed as a Native American in federal forms filed by the law schools at Harvard University and the University of Pennsylvania, where she worked, The Boston Globe reported in 2012.

Warren has denied using her heritage to get ahead, and the Globe's research found that it was not considered by the Harvard or Penn faculties or those who admitted her to law school at Rutgers University or offered her jobs at the University of Houston or the University of Texas.

In a slickly produced five-minute video also released Monday, Warren was seen walking through a working-class neighborhood of Norman, Oklahoma, and talking to her brothers about their mother's Native American ancestry.

Claiming Native American heritage is an especially sensitive matter in Oklahoma because of the state's history as a relocation spot for Indians who were forced to move from other regions in the 1800s.

After the tribes were placed on reservations in what eventually became Indian Territory, the government decided that their communal property should be divided into individual allotments for members. The goal was to free up more "excess" land for white settlers expanding westward and to accelerate the Indians' assimilation into American society.

Unlike other states where some tribes live on separate, remote reservations, Oklahoma is a checkerboard of land where tribal members lived in the same communities with whites and intermarried over the generations, creating families with varying fractions of Native American heritage.

The tribes reject the idea that, having taken much of their land, others can now claim their ethnic heritage with any DNA connection.

People who casually mention some Indian heritage are "dishonoring legitimate tribal governments and their citizens whose ancestors are well documented and whose heritage is proven," said Chuck Hoskin Jr., secretary of state for the Cherokee Nation.

In Oklahoma, some politicians claim Native American heritage but are careful about doing so. Two of the state's five House members — Republicans Tom Cole and Markwayne Mullin — are enrolled members of Oklahoma-based tribes.

While there are occasional reports of false claims of Indian heritage, mostly in the art or literary communities, such claims would be terribly damaging in politics, said Keith Gaddie, a political scientist at the University of Oklahoma.

"Cultural appropriation is the dumbest thing that anybody can do, but especially a Democrat."

Said Branham: "It's not a costume. You can't put on and take off being native whenever you feel like it or whenever it benefits you. It's really actively being a part of that culture."