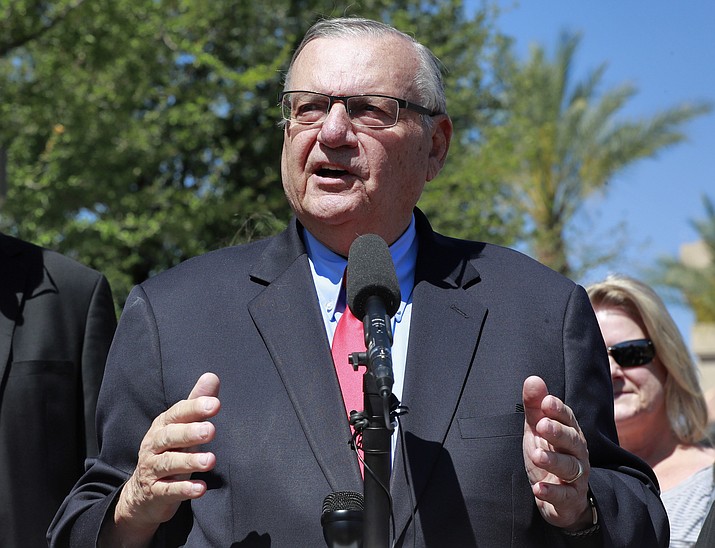 Former Arizona Sheriff Joe Arpaio speaks at the Arizona Capitol on May 22, 2018, as part of his U.S. Senate campaign. The 9th Circuit Court of Appeals on Monday, Oct. 15, 2018, appointed Los Angeles attorney Christopher G. Caldwell as a special prosecutor in an appeal over Arpaio's pardon after the Justice Department refused to handle the appeal. (Matt York/AP file)

PHOENIX — A Los Angeles attorney has been appointed to defend a ruling by a lower court judge who refused to erase the criminal record of former metro Phoenix Sheriff Joe Arpaio after he was pardoned by President Trump.

The 9th Circuit Court of Appeals on Monday picked Christopher G. Caldwell to argue in support of the ruling that dismissed the lawman's case but refused to expunge his record.

The appointment in the appeal came after President Donald Trump's Justice Department refused to handle the case.

Caldwell worked for the Justice Department in the 1980s and, in private practice since then has focused on cases involving the entertainment industry, intellectual property and other areas.

After the six-term sheriff was defeated in late 2016, he was convicted of criminal contempt of court for his acknowledged disobedience of a judge's 2011 order that barred his traffic patrols that targeted immigrants. Arpaio was accused of prolonging the patrols for 17 months to boost his successful 2012 re-election campaign.

The pardon of the misdemeanor conviction spared Arpaio — an early supporter of Trump's presidential campaign — a possible jail sentence.

Arpaio is appealing the ruling that refused to expunge his criminal record.

Lawyers for the Justice Department won the conviction. But after the pardon, it sided with Arpaio, arguing that the conviction should be expunged because he was pardoned before it became final.

Legal advocacy groups that focus on free speech, democracy and civil rights have mounted a challenge to the pardon and asked for the appointment of a prosecutor.

A three-judge panel of the 9th Circuit will hear the appeal of the lower court's ruling.

Meanwhile, Arpaio plans to ask the U.S. Supreme Court to consider his objection to the special prosecutor.

"There are a lot of good indications that the United States Supreme Court will pick it up," said Jack Wilenchik, one of Arpaio's attorneys,

Arpaio was defeated in late August in a U.S. Senate primary.