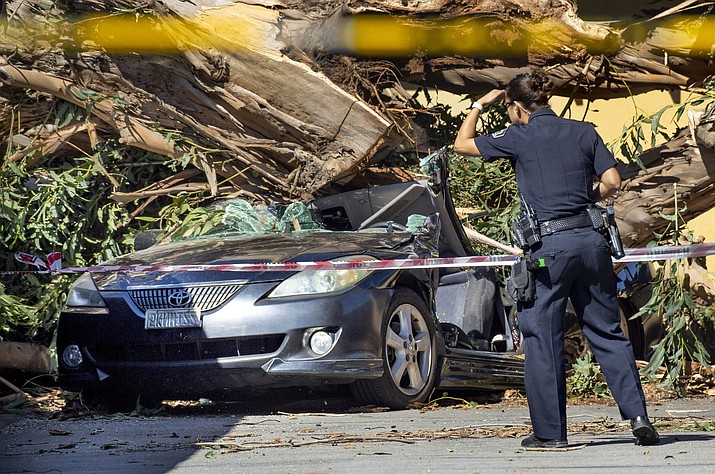 A Tustin police officer looks over the debris of a car that was crushed by a 40-foot tall eucalyptus tree that snapped during high winds Monday, October 15, 2018. A woman inside the car was killed as she was backing out of a carport in Tustin. (Mindy Schauer/Orange County Register via AP)

LOS ANGELES — California remained on guard Tuesday, but gusty winds that raised the threat of wildfires were decreasing in strength and becoming less widespread a day after knocking out power to thousands and forcing utilities to proactively cut electricity to prevent sparks.

Warnings for critical fire weather conditions were canceled for all but a stretch of the state's southwest corner and part of the California-Oregon border, the National Weather Service said.

All warnings were expected to expire by evening. Meteorologists warned, however, that withering conditions would keep fire concerns elevated.

Many areas saw relative humidity levels fall into single-digit percentages as very dry air blew from the interior toward the coast, aggravating conditions in a state that the U.S. Drought Monitor shows is mostly in some stage of drought or at least abnormally dry.

Despite a weekend dousing of tropical moisture left over from former Hurricane Sergio, downtown Los Angeles has recorded less than half the rainfall it normally receives by this time of year.

Pacific Gas & Electric said it expected to restore power Tuesday to the last of about 60,000 Northern California customers whose service was shut off Sunday night in a bid to prevent wildfires during blustery conditions. Most had service restored on Monday.

It was the first time PG&E pre-emptively cut power and came after authorities blamed its power lines for sparking some of California's most destructive blazes. San Diego Gas & Electric also cut power briefly to a few hundred customers on Monday.

PG&E expects to pay billions of dollars in wildfire damages and has sought ways to limit its liability through the courts and legislature.

Southern California Edison, meanwhile, was working in the early afternoon to restore service to 14,300 customers, mostly in Riverside and Los Angeles counties, spokeswoman Susan Cox said. The utility had said it also might cut power to some areas but did not do so.

In the city of Los Angeles, Department of Water and Power crews had reduced outages to just a few hundred customers early in the day.