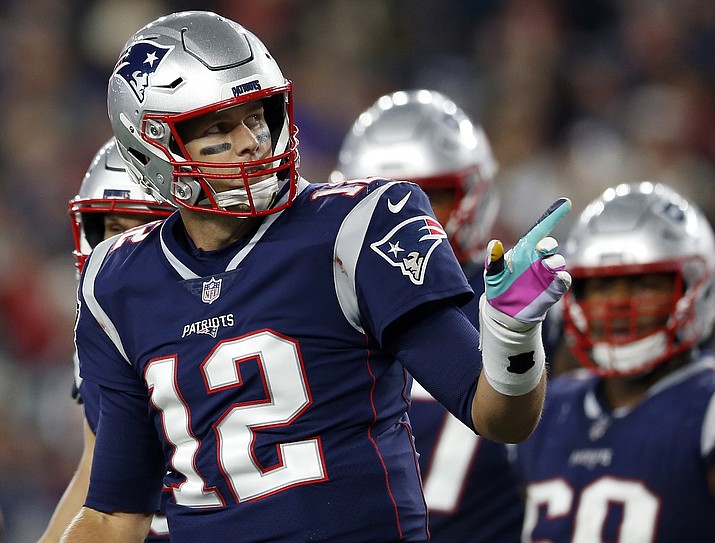 New England Patriots quarterback Tom Brady signals as he runs to the sideline after his team scored a touchdown during the second half of an NFL football game against the Kansas City Chiefs, Sunday, Oct. 14, 2018, in Foxborough, Mass. (Michael Dwyer/AP)

FOXBOROUGH, Mass. — Tom Brady needed everything he had to fend off Patrick Mahomes — including his legs.

Brady passed for 340 yards and a touchdown and ran for another score, diving head-first between two defenders in a rare run by the 41-year-old quarterback.

“I got close to the goal line and I just figured I’d try to get it in,” Brady said of his late TD plunge. “We needed it.”

Brady got some help from rookie Sony Michel, who rushed 24 times for 106 yards and two touchdowns in another solid performance.

“It’s tough to slow those guys down, they’ve been scoring a lot of points all year,” Brady said. “They’re gonna be pretty tough to stop. Glad we had our last shot and glad we took advantage of it.”

It was the first loss of the season for the Chiefs (5-1), who were again let down by a defense that came in allowing an NFL-worst 462 yards per game.

New England (4-2) led 24-9 at intermission, but Mahomes directed an impressive rally for Kansas City. He finished 23 of 36 for 352 yards in his first loss as a starting quarterback, with three of his four TD passes going to Tyreek Hill.

Mahomes threw two interceptions in the first half but was unflappable down the stretch. He found Hill for a 1-yard TD pass that made it 33-30 Kansas City with 8:38 left. With the Chiefs trailing 40-33, he connected with Hill again for a 75-yard score that tied the game with just over three minutes remaining.

“The last two weeks it seems like we just can’t punch it in there and I feel like the second half we finally started getting it in the end zone,” Mahomes said.

CINCINNATI (AP) — James Conner ran for 111 yards and a pair of touchdowns on the eve of Le’Veon Bell’s possible return, and Antonio Brown turned a short pass into a 31-yard touchdown with 10 seconds left as the Pittsburgh Steelers pulled off another improbable comeback in Cincinnati, beating the Bengals 28-21 on Sunday.

The Steelers (3-2-1) have won eight in a row against their AFC North rival, three times rallying in the final minute at Paul Brown Stadium to keep it going. After Joe Mixon’s 4-yard touchdown run with 1:18 left got the Bengals (4-2) thinking this might finally be the time they end the streak, Ben Roethlisberger and the Steelers stunned them again.

Brown caught a short pass and outran the secondary for the winning score, leaving thousands of Steelers fans twirling their towels in the stands. The Steelers are 16-2 at Paul Brown Stadium during Marvin Lewis’ 16 seasons as Bengals coach, including a pair of playoff wins.

Same outcome as usual. This one ended with a brief scuffle after Andy Dalton’s final pass fell incomplete, leaving him 3-12 all-time against Pittsburgh.

NASHVILLE, Tenn. (AP) — The Ravens piled up a franchise-record 11 sacks in the rain. Za’Darious Smith had three sacks and Patrick Onwuasor had two for the Ravens (4-2), who had six sacks by halftime. They finished a sack off the NFL record for a game, shared by five teams.

Dean Pees and the Titans simply couldn’t stop his old team as the Ravens outgained Tennessee 361-106 and punted only once against a defense led by their former defensive coordinator. Pees came out of a short retirement to join first-year head coach Mike Vrabel.

Joe Flacco threw for 238 yards and a touchdown for Baltimore. Alex Collins scored on TD runs of 13 and 2 yards.

The Titans (3-3) lost their second straight and were shut out at home for the first time since moving into Nissan Stadium in 1999.

The Rams, who had surrendered 31 points in back-to-back games, improved to 6-0 in sending the Broncos (2-4) to their fourth straight loss.

The Broncos pulled to 23-20 on Case Keenum’s 1-yard dart to Demaryius Thomas with 1:22 remaining, capping a 77-yard drive that included three defensive penalties. Rams receiver Robert Woods, however, knocked Brandon McManus’ onside kick out of bounds, and the Rams ran out the clock with Jared Goff (14 of 28 for 201 yards) twice taking a knee.

Perhaps pumped up by some pregame mingling with UFC fighter Conor McGregor , the Cowboys rolled to a 24-0 halftime lead. Beasley got his first two touchdowns of the season for the NFL’s 30th-ranked passing offense that was facing the league’s No. 1 pass defense.

Prescott had 151 of his 183 yards passing in the first half because Dallas didn’t need to throw while coasting during a second-half blowout that dropped Jacksonville to 3-3.

MIAMI GARDENS, Fla. (AP) — Jason Sanders kicked a 47-yard field goal on the final play of overtime after Cody Parkey missed a 53-yard try for the Chicago Bears, who blew an 11-point lead in the final 16 minutes of regulation.

Miami’s Brock Osweiler threw for 380 yards and three touchdowns subbing for Ryan Tannehill, who sat out because of an injured throwing shoulder.

The Dolphins took the kickoff to start overtime, marched 74 yards and were on the verge of victory when Kenyan Drake fumbled just before crossing the goal line. Eddie Goldman recovered for the Bears, who then drove to the Miami 35.

But former Dolphin Parkey was wide right on his attempt with 2 minutes left.

The Falcons (2-4) scored on their first three possessions and held off a wild comeback by Tampa Bay (2-3), avoiding their first 1-5 start since 2007.

Winston and the Bucs almost pulled off a miracle on the final play of the game after driving to the Atlanta 21. With no timeouts, the quarterback took the snap and tried to surprise the Falcons by taking off up the middle of the field. When he was about to be tackled at the 10, he pitched toward receiver Adam Humphries, who couldn’t hang on.

The ball skipped to Mike Evans, who blindly flung it in the direction of DeSean Jackson at the 5. Jackson might’ve had a chance to dive for the end zone, but he couldn’t come up with another bouncing ball. It hopped out of bounds to end the game.

Morris Claiborne returned the first of three interceptions thrown by Andrew Luck for a touchdown as the Jets (3-3) moved to .500 by taking advantage of mistakes by the short-handed Colts (1-5), who lost their fourth straight.

With Joe Namath and the 1968 Super Bowl-winning team celebrating its 50th anniversary, Darnold was 24 of 30 for 280 yards, with TD throws to Terrelle Pryor and Chris Herndon and an interception.

Houston trailed by three when Phillip Gaines was called pass interference on Will Fuller in the end zone with 2 minutes remaining, moving the Texans 41 yards to the 1-yard line. But the Texans (3-3) lost 7 yards on three plays, capped by an incomplete pass intended for Ryan Griffin that Matt Milano knocked down to force Houston to kick.

A 27-yard field goal by Ka’imi Fairbairn tied it with 1:34 remaining.

Two plays later, Joseph stepped in front of a pass from backup Nathan Peterman intended for Kelvin Benjamin and dashed untouched into the end zone to put the Texans on top.

LONDON (AP) — Russell Wilson threw for three touchdowns, including one off a botched snap in the second quarter.

Chris Carson rushed for 59 yards and rookie Rashaad Penny gained an additional 43 for the Seahawks (3-3), who played to a vociferously supportive crowd — a London-record 84,922 were in attendance — despite the Raiders (1-5) being the designated home team.

Oakland quarterback Derek Carr left with an apparent left arm injury with 8:52 remaining in the fourth quarter after the last of his six sacks and did not have the chance to return before the Seahawks ran out the clock.

Norman ended his 19-game interception drought by catching a jump ball thrown by Newton on a third-and-long play early in the second quarter, his first pick since Dec. 24, 2016. Norman also popped the ball out of Panthers rookie receiver D.J. Moore’s hands in a showcase performance against the team that abruptly cut ties with him after his All-Pro 2015 season.

Newton threw for 275 yards and two touchdowns on 27 of 40 passing and rushed for 43 yards in a turnover-marred loss.

The 36-year-old Rivers continued one of the best starts of his 15-year career, leading the Chargers (4-2) to their third straight win. Rivers finished 11 of 20 for 207 yards and had only one mistake, an interception midway through the fourth quarter.

San Diego did most of its damage on the ground, with Gordon running for 132 yards and scoring on runs of 4, 10 and 11 yards.