Paper, plastic ... or bring your own?
Farmers market manager says reusable bags are better for the environment, and you 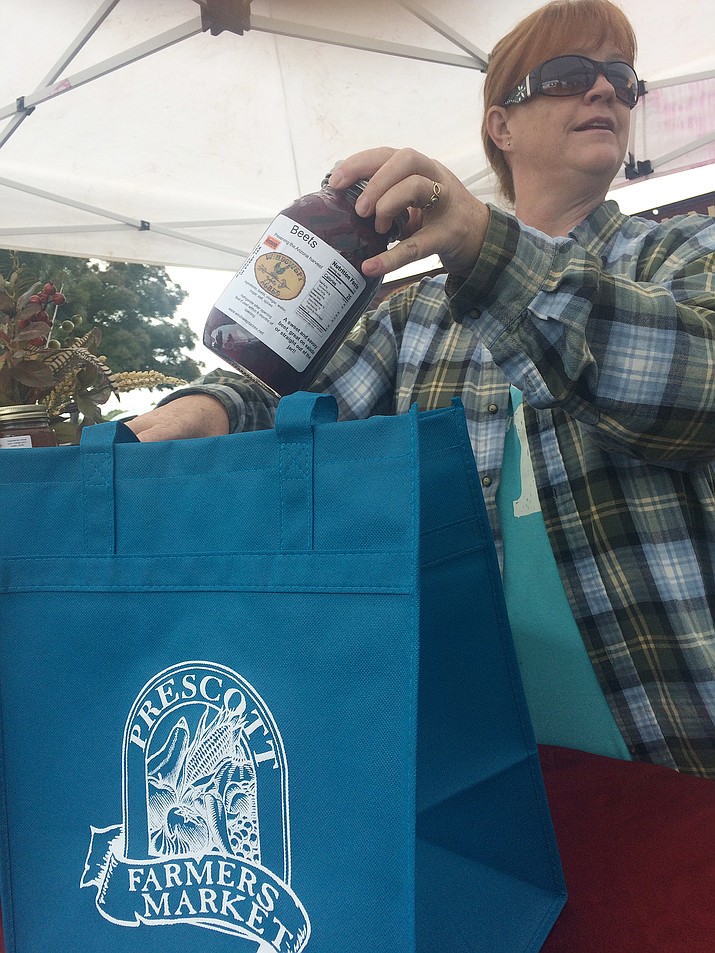 Pam Harris of Windswept Acres puts a jar of preserved beets into a reusable bag at the Prescott Farmers Market on Saturday, Oct 13. (Jason Wheeler/Courier)

With a couple reusable bags of groceries in his car, Prescott resident Mike McCall responded to the news of Kroger phasing out plastic bags by 2025 by saying the company should do it much sooner.

“Plastic is non-biodegradable and ends up in the middle of the ocean,” McCall said.

McCall, who used to live in California, said he has been using reusable bags for about 15 years.

According to an article by Stephanie Morse at Cronkite News, Kroger, which owns Fry’s Foods in Arizona, will begin a transition to reusable bags in its 2,800 stores starting in the Seattle area.

In the article, Pam Giannonatti, spokeswoman for the Fry’s Food division of Kroger, said she was unsure of when the transition was going to start in Arizona, but hoped customers would start changing their habits.

“We’re highly encouraging our customers to shift their shopping habits and use reusable bags,” Giannonatti said. “We’re not taking away the bags tomorrow.”

Prescott Valley resident Shelley Murphy said that she personally likes paper bags over plastic ones. As far as reusable bags, if she had to bring them every time, she would probably forget them, Murphy said. “A stop at the store is a sporadic thing, so I wouldn’t have them with me,” she said. “I wouldn’t like it but it is what it is.”

Morse’s article notes that Kroger phasing out plastic bags is part of its Zero Hunger, Zero Waste initiative in which the nation’s largest grocer is aiming to become zero waste by 2020 and trying to minimize food waste by 2025.

While Bisbee passed a 2012 ordinance banning retailers from providing plastic bags, the Arizona State Legislature prohibited cities and municipalities from regulating plastic bags and other single-use containers in 2015.

Reusable bags, which are usually made out of organic or recycled material, are better for the environment and better for one’s health, said JB Del Campo, market manager for Prescott Farmers Market. Most produce at the store was shipped there in plastic bags and contained in plastic before being put out, and once it’s bought it gets put in plastic again, Del Campo said.

“Depending on the time period that fruit or vegetable is sitting in that plastic, parts of those chemicals from that plastic can soak into the skins of the produce,” he said. “Depending on how long that produce is with that plastic differentiates how much plastic you’re actually getting into your food.”

Prescott Farmers Market has had regular canvas bags for at least five years and two years ago introduced new ones that are made of different material and are more versatile, Del Campo said.

The bags cost $3 to purchase.

Fry's to phase out plastic bags at all its grocery stores over 7 years
Companies fight plastic use despite state’s reluctance to do so
Last chance for farmers market this season
Paper or plastic? ... or neither
Beyond paper straws: More hacks for reducing plastic at home
Event Calendar