Prop 127 split is without evidence 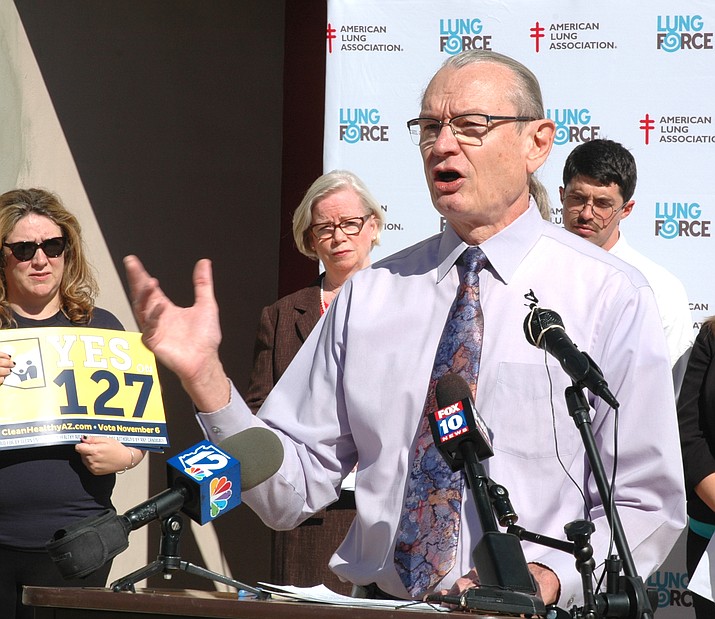 PHOENIX ­— Public health advocates urged voters this week to support a renewable energy mandate on the November ballot even though not one of them could say how much of a difference it actually would make in ground-level air pollution.

And a state utility regulator urged a vote against Proposition 127 even though he conceded that his colleagues, who already have the power to mandate more renewable energy, have yet to do much of anything about it.

JoAnna Strother, regional director for public policy for the American Lung Association, said Tuesday that Phoenix is one of the 10 worst areas in the country for ozone pollution.

But standing outside the office of the Lung Association, near a busy Phoenix intersection, no one could say what percentage of pollution being inhaled was due to power plants versus vehicle traffic.

“As much as it would be desirable to have exact precise forecast numbers on every issue, sometimes you just can’t answer the question,’’ said Dr. Bob England, the former Maricopa County health director.

But England argued that instinctively the air would be better if Proposition 127 is approved than if it is not and utilities remain free to go ahead with plans to build more gas-fired power plants to meet future needs.

“I can’t give you a number how much is going to happen 20 years from now,’’ he said, saying variables include the kind of transportation available and what’s being used to fuel vehicles.

“Some things you just can’t answer,’’ England said. “But common sense says you don’t want to go the other direction.’’

Proposition 127, if approved by voters, would constitutionally require most utilities to generate at least 50 percent of their power from renewable sources by 2030.

What is known is that utilities are looking at additional gas-fired plants in that time frame, plants that Dylan Sullivan of the Natural Resources Defense Council said would not be needed if utilities were forced instead to get more of their power from renewable sources. And Sullivan cited figures that predict a 51 percent reduction in nitrogen oxides, a precursor of ozone, by 2030.

But that is a reduction in what comes from power plants and does not reflect various other — and larger — sources of pollution. And there is some data to suggest that the pollution from gas-fired power plants is a very small portion of what affects most urban dwellers.

In Pima County, for example, 46 percent of nitrogen oxides come from on-road vehicle use. By contrast 20 percent is from “point sources,’’ of which Pima County records show more than half is from the CalPortland cement plant at Rillito and 34 percent of that 20 percent — or less than 7 percent — comes from the gas-fired Irvington power plant.

Joe Barrios of Tucson Electric Power said there is a plan to build one new higher-efficiency gas-fired power plant. But he said most of the future needs will be met with solar and wind, to the point where his utility could get to 30 percent renewable by 2030.

Arizona Public Service has plans to build what could amount to an additional dozen gas-fired power plants between now and 2030, presumably in the Phoenix urban area.

But Jeff Burke, the company’s resource manager, said that’s not set in stone.

“When solar with a battery is competitive, we’ll take it,’’ he said, saying the key is meeting future energy needs in the most efficient way possible. “We’re trying to do an all-of-the-above approach.’’

Also Tuesday, Andy Tobin, one of the state’s five utility regulators, came out against Proposition 127. Tobin, a resident of rural Paulden, said questions of what are appropriate resources should be left to him and his colleagues on the Arizona Corporation Commission. And he said having standards set by the commission provide more flexibility as needs — and costs — change, versus a constitutional mandate for 50 percent renewables.

He conceded, though, the five-member, all-Republican commission to date has done very little to convince the public that it is really interested in pursuing more renewable energy. In fact, the current standard for utilities of 15 percent renewable energy by 2025 has not been changed since 2006.

“They don’t want to pull the trigger,’’ he said of his colleagues. “I’m very frustrated.’’

That, Tobin said, could lead voters to decide that the only real way to get any meaningful action is by approving Proposition 127.

Tobin crafted his own plan nearly a year ago for an 80 percent “clean’’ energy standard. But utilities would not need to reach that goal until 2050. And they could meet some of that with nuclear power.

What’s particularly annoying, Tobin said, is that his plan was on the table months before there even was a Proposition 127, much less the more than $8.2 million in funding for it from California billionaire Tom Steyer.

And he even got the ACC to approve a moratorium on new gas-fired power plants — the ones the utilities say in their long-term resource plans they intend to build — until the end of the year. The premise, Tobin said, is that would give the regulators a chance to review, adjust and finally adopt his plan before utilities start construction.

But Tobin has yet to get the votes to actually advance his plan. Still, he said, voters should have faith that the commission eventually will act on his plan, or some variation of it, and reject Proposition 127.

Campaign spokesman D.J. Quinlan acknowledged that the commission could increase the current renewable energy standard, including adopting the Tobin plan. But he questioned whether the commission, at least as currently constituted, would pursue anything that Arizona Public Service, the state’s largest utility — and source of $11 million in funds so far to fight the initiative — does not support.

“I think there’s a reason why APS spent millions of dollars electing their hand-picked corporation commissioners,’’ he said.

That refers to $4.2 million that Pinnacle West Capital Corp., APS’s parent, admitted spending in 2016 to defeat Democrat candidates for the commission. And Pinnacle West will neither admit nor deny it was the source of $3.2 million spent to elect Republicans in 2014.

But Quinlan dodged repeated questions about why Steyer has put in more than $8.2 million from his own political action committee to convince Arizonans to adopt the constitutional change envisioned in Prop 127.