Investigators want to know who left gator in Lake Michigan 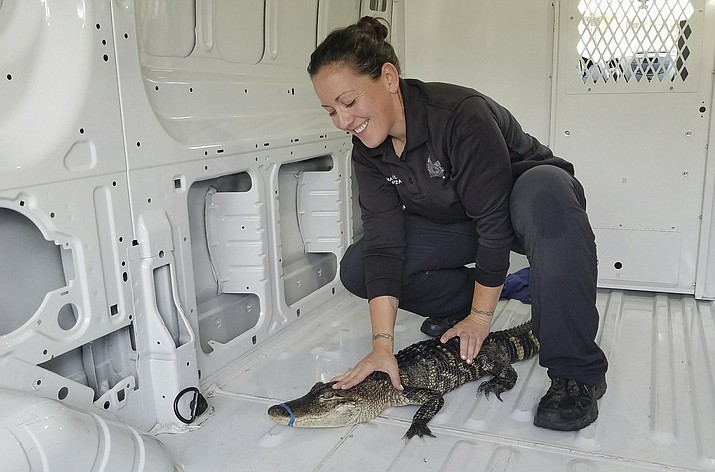 This Monday, Oct. 8, 2018, photo provided by the City of Waukegan, Ill., shows Nicole Garza, an animal control officer for Waukegan police, holding down a 4-foot alligator in a van outside city hall after animal control workers helped capture it from Lake Michigan. The alligator, whose mouth was taped shut, was spotted by a kayaker fishing for salmon off the Waukegan shore. It was taken to the Wildlife Discovery Center in nearby Lake Forest. Animal control officers have started an investigation to determine who dumped the alligator into the water. (David Motley/City of Waukegan via AP) 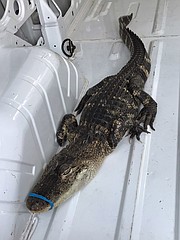 The 4-foot alligator was taken to the Wildlife Discovery Center in nearby Lake Forest. (Sam Cunningham/City of Waukegan via AP)

WAUKEGAN, Ill. — Authorities don’t know who dumped a 4-foot-long reptile into Lake Michigan, but they now know what kind it is.

After initially believing the animal spotted Monday swimming near Waukegan, Illinois, by a startled kayaker was a caiman, officials now say it is actually an alligator.

Either way, it had no business paddling around the suburban Chicago shoreline. Waukegan spokesman David Motley said Tuesday that animal control officers are trying to determine who abandoned the creature, which was found with its mouth kept shut by rubber bands.