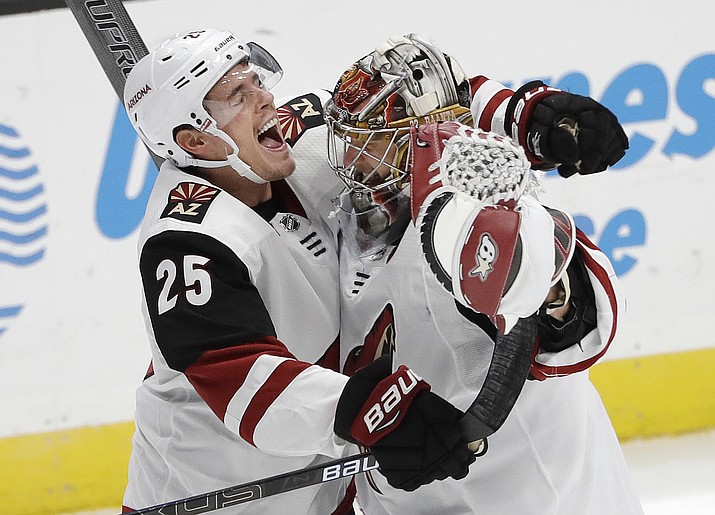 ANAHEIM, Calif. — Nick Cousins scored in the shootout, Antti Raanta made 23 saves and the Arizona Coyotes beat the Anaheim Ducks 3-2 on Wednesday night for their first win of the season.

The Coyotes got their first goal this season when Strome converted a power-play opportunity with 2½ minutes left in the first. They were the last NHL team to score.

Anaheim was trying for the first 4-0 start in franchise history. Ryan Kesler and Ben Street scored for the Ducks (3-1), and John Gibson made 37 saves.

Street’s goal at 14:39 of the second period was his first in the NHL.

Anaheim’s Jakob Silfverberg had a chance to win it late in overtime but fired wide of the net.

Kesler returned to the lineup after missing the first three games of the season. The center had hip surgery in June 2017 and played in only 44 games last season.

Kesler was the center on the third line and scored 5:52 into the first period. He battled for the puck in front of the Arizona goal before firing it past Raanta.

NOTES: It was Arizona’s longest goal drought to open a season, more than doubling the 67:11 mark at the start of the 1996-97 season. ... Two of the six goals Anaheim has allowed this season were short-handed. The Ducks and Flyers are the only teams to have allowed two so far this season. ... Arizona’s Derek Stepan played in his 600th NHL game. He is the ninth player from the 2008 draft class and first non-first round pick to reach that milestone.

Coyotes: Return home to face Buffalo on Saturday before embarking on a four-game road trip.

Ducks: Have back-to-back road games beginning on Saturday against Dallas.