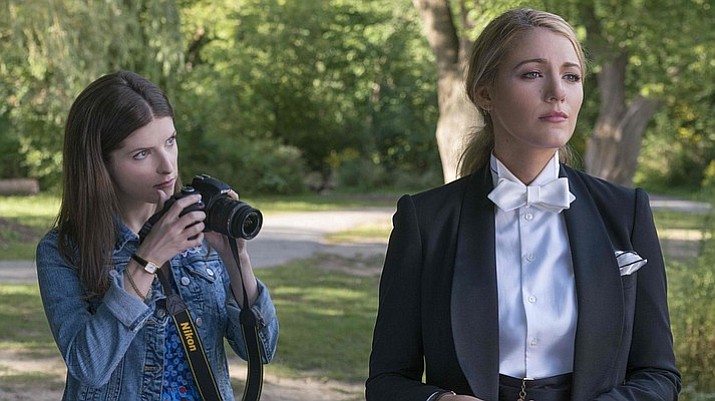 A Simple Favor proved to be a disappointment for me. I was expecting a film that had suspense, about a missing friend, and some humor in the dialog between the two friends. That is what seemed to be promised in the promos and the trailer.

But the suspense, growing out of a friendship that blossoms between two women who could not be more opposite in their personalities, and in an almost immediate time frame is just too hard to accept.

Stephanie (Anna Kendrick) is an intelligent widow with a young son, Miles. Miles is in grade school and has a buddy, Nicky, also about 8 years old. Stephanie picks Miles up at school every day. One day she gets a call from Nicky’s mother, Emily, asking Stephanie if she could bring Nicky home with Miles. Emily (Blake Lively) would pick Nicky up later; she’s tied up in some business matter. Emily and Stephanie have never met.

Stephanie is a down-to-earth woman who is attentive to her son and her responsibilities in general. One of her main enterprises, which we see often, is a YouTube series of cooking classes.

Emily appears at Stephanie’s house to get Nicky. Unlike the modestly dressed Stephanie, Emily is clothed in elegance from head to foot. Her personality reflects that. The two mothers ‘hit it off’ immediately, but in a very unconvincing way. Stephanie does the pickup of Nicky more often. Sometimes, Nicky spends the night at Miles’ house.

Early on, Stephanie is at Emily’s house which is palatial compared to hers. Emily starts Stephanie drinking martinis, which she is not used to. That’s the basis of the ‘best friend status’ which begs the question, “Doesn’t socially active Stephanie have some friends already?” Emily’s husband Sean (Henry Golding) is a struggling author, but their marriage seems solid.

One time, Nicky is at Stephanie’s house for the night.

Emily does not come for him the next day — or the next three days. Neither Stephanie or Sean knows where she is. The police are engaged, but no luck.

Stephanie feels compelled to undertake the search for Emily. She goes into Emily’s house and plows through files and notepads to get the names of people she knows, or has some dealings with. Stephanie starts contacting these people, each time pretending she is some business person involved in a connection between the named individual and Emily.

Progress is very limited. Then some major incident opens the door to a resolution to all the questions raised about Emily’s disappearance.

Even then, the writers of A Simple Favor have introduced some twists and surprises to try to give us some Alfred Hitchcock flavor to the film. It doesn’t quite work.

Much of the dialog in conversations between the two women, meant to be funny only has Emily demeaning Stephanie’s simple life. The performances here are adequate for the quality of A Simple Favor.