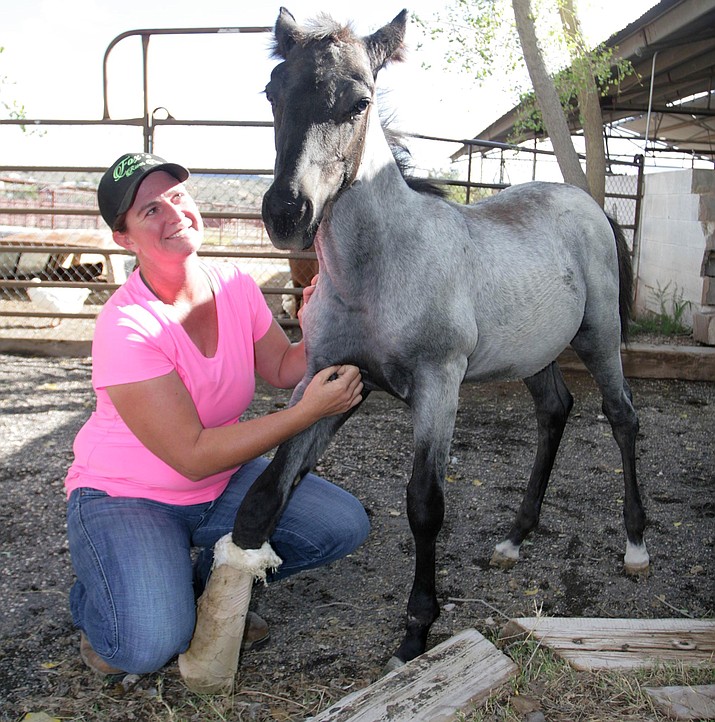 Osteitis of the metacarpophalangeal.

It’s not easy to pronounce. Imagine living with it.

Her affliction is essentially infection and inflammation of the bone from the ankle down. It’s so bad that Miss Moon’s previous owner was on the verge of taking her to a local animal sanctuary for lion food.

That’s what Katie Longfellow says. Longfellow, vet tech and office manager at Camp Verde’s Central Arizona Equine, had cared for the filly since late July when the horse was barely a week old.

If it weren’t for Longfellow’s love, and the guidance of Dr. Jim Bleak, Miss Moon’s bad limb would spell the end of her life.

But Longfellow talks about living in a “throw-away society,” and how that’s just not how she does things.

“I’ve got to give her every opportunity,” Longfellow says. 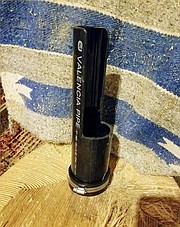 That’s why Bleak amputated about 6 inches of Miss Moon’s bad leg on Friday morning, and fit her with a temporary prosthesis.

The temp, Bleak says, is made of a material similar to PVC pipe and is actually similar to the brace that was around Miss Moon’s foot before.

Longfellow has set up a GoFundMe page to help with the cost of the permanent prosthesis. Fortunately for Miss Moon — and for Longfellow — Bleak says the temporary can be used “longer if we need to.”

Prosthetics will be expensive, both in the short- and the long-term, Bleak says.

It was on Aug. 25 when Longfellow got the call that Miss Moon’s then-owner couldn’t take care of the filly any longer.

Longfellow was barrel racing, in between competitions, when Bleak gave her the news.

“I told him I’d pick her up when I was finished here,” she recalls.

At that moment, Longfellow went from an eight-horse household to nine — plus the 24 horses she boards.

Antibiotics were the prescribed treatment until Sept. 10 when Bleak X-rayed Miss Moon and learned that the meds wouldn’t cure what she had.

“Her foot bones are pretty much gone,” Longfellow says. “I’m in this for the long haul, but without help she can’t live on.”

At 9 a.m. Friday, Bleak removed the bad part of Miss Moon’s right front leg in a procedure he had expected would take about 90 minutes.

Before she woke, Miss Moon’s temporary leg already was affixed to the stump, so when she tried to stand she would have the stability she needs.

Because of osteitis, Miss Moon’s right front leg was amputated Friday about 6 inches above the foot. (Bill Helm/Camp Verde)

For Bleak, removing part of Miss Moon’s leg isn’t as critical as the recovery.

“It’s the complications afterward, such as pressure on the stump, blood flow, possible infection,” he says. “Once it heals, we can develop a permanent prosthetic.”

It will take about six weeks, the doctor says. Once the inflammation and swelling go down, it will be easier to know whether or when the stump “can bear weight,” he says.

Removing the bad part of Miss Moon’s leg does not guarantee that Osteitis won’t “go up the leg,” Bleak says.

It’s still possible the filly would have to be put down, he says.

She had been running around, though, bum foot and all. Thanks to the bracing and the love of Longfellow.

“She hasn’t had a leg to stand on her whole life,” Longfellow says. “Maybe the first couple of weeks, maybe the first month, but not since then.”

Longfellow has worked for Bleak for the 10 years. She got her first horse when she was 7. Horses are as much of Longfellow’s life as her own arms and legs. But she’s “never been around” a horse with a prosthetic limb.

“We’re too soft to put her down,” Longfellow says of her and the doctor. “She’s a doll, so much personality.”

Longfellow said she could not handle being in surgery with with Miss Moon.

“I’m her mom. I’m nervous. There might be some tears,” she said.

Longfellow has taken to social media to raise money to help with Miss Moon’s care. In addition to the GoFundMe page, there is a Facebook page at this link.