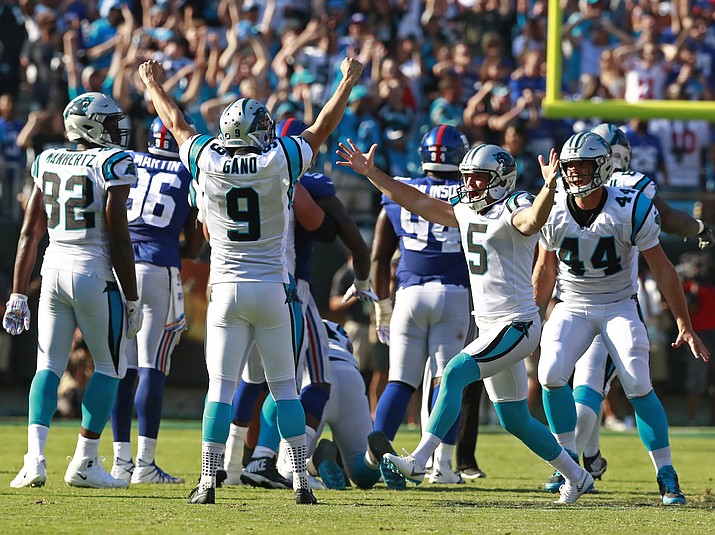 CHARLOTTE, N.C. (AP) — Graham Gano connected on a career-long 63-yard field goal with 1 second remaining to lift the Carolina Panthers to a wild 33-31 victory over the New York Giants on Sunday.

Gano’s winning kick, tied for second longest in league history, came after the Giants erased a 14-point deficit. Eli Manning hooked up with Saquon Barkley on a 15-yard touchdown pass down the right sideline — the rookie made a long dive into the end zone — to put the Giants in front 31-30 with 1:08 remaining.

It’s the second year in a row the Giants (1-4) have been beaten by a monster field goal at the end. In the third game last season, Jake Elliott of the Eagles kicked a 61-yarder for a 27-24 win.

Cam Newton threw for 237 yards and had two touchdowns and two interceptions for the Panthers (3-1).

Manning finished 22 of 36 for 326 yards with two touchdowns and two interceptions. Odell Beckham Jr., had a big game as a receiver and passer. Beckham had eight catches for 131 yards and a touchdown and also threw a 57-yarder to Barkley for New York’s first touchdown.

After rookie quarterback Baker Mayfield drove the Browns (2-2-1) into position, Joseph, signed after Week 2 following Zane Gonzalez’s release, lined his kick through the uprights to give Cleveland its first AFC North win in 19 tries.

The Ravens (3-2) had plenty of chances, but Joe Flacco threw a costly interception in the first half and the Browns blocked one of Justin Tucker’s field goal tries.

PHILADELPHIA (AP) — Kirk Cousins threw for 301 yards and one touchdown, Linval Joseph returned a fumble 64 yards for a score and the Vikings won a rematch of last season’s NFC championship game.

Carson Wentz and the rest of Philadelphia’s offense again struggled as the defending Super Bowl champions fell to 2-3.

Trying to rally from a 17-point deficit midway through the third quarter, the Eagles were set up to take the lead after Roc Thomas dropped a backward pass and Nigel Bradham recovered the fumble at the Vikings 30 in the fourth quarter. But Wentz was called for intentional grounding and coach Doug Pederson elected not to let Jake Elliott try a 58-yarder.

HOUSTON (AP) — DeAndre Hopkins had 151 yards receiving, including a key reception in overtime, and Ka’imi Fairbairn’s 36-yard field goal lifted the Houston Texans to a 19-16 win over the Dallas Cowboys on Sunday night.

The Cowboys got the ball first in OT but had to punt when Zach Cunningham stopped Ezekiel Elliott for no gain on third-and-1.

A 49-yard catch and run by Hopkins got the Texans (2-3) in scoring range in overtime. He grabbed a short pass and twice spun away from would-be tacklers to stretch the play.

It is Houston’s first win over the Cowboys (2-3) since the team’s first game on Sept. 8, 2002, ending a three-game losing streak to Dallas.

Playing without their top two receivers due to concussions suffered late in the first half, the Rams leaned heavily on Goff, Gurley and wide receiver Robert Woods to escape Seattle and improve to 5-0.

Gurley scored on a 2-yard run in the first quarter, and added TDs of 2 and 5 yards in the second half. Gurley’s third rushing TD on the second play of the fourth quarter pulled the Rams within 31-30. But new kicker Cairo Santos hooked the extra point attempt and Seattle maintained a one-point lead.

Derek Carr was 24 of 38 for 268 yards for the Raiders (1-4). He accounted for Oakland’s lone touchdown in the fourth quarter on a 1-yard pass to Jordy Nelson which brought the Raiders within 27-10.

Patrick Mahomes threw for 313 yards and ran for a touchdown, though he also threw his first two picks of the season. Kareem Hunt added 87 yards and a touchdown on the ground as the Chiefs (5-0) marched all over the league’s top-ranked defense at soggy Arrowhead Stadium.

Tyreek Hill, frequently matched up with the Jaguars’ Jalen Ramsey in an entertaining one-on-one affair, had four catches for 61 yards in a game that grew testy on both sides.

Crosby missed a career-high four field goals in one game and botched an extra point to boot.

Blount had a pair of 1-yard TD runs in the first quarter and Stafford’s 8-yard pass to Marvin Jones late in the second quarter put Detroit up 24-0.

Darnold also had a TD toss to Terrelle Pryor that sealed the game late in the fourth quarter for the Jets (2-3). The rookie quarterback finished 10 of 22 for 198 yards and the three scores with an interception to help New York to its first win since the season opener.

Crowell needed just 15 carries to break the team record of 210 yards rushing set by Thomas Jones in 2009 against Buffalo.

CINCINNATI (AP) — Michael Johnson returned an interception for the tying score, and Sam Hubbard went 19 yards with a fumble for the clinching touchdown, rallying the Bengals from a 17-point deficit.

Cincinnati (4-1) pulled off its biggest comeback of the season and extended its best start since its 2015 playoff season.

The Dolphins (3-2) had plenty of blame to go around for their second-half meltdown, helping the Bengals score those 27 consecutive points with mistakes.

PITTSBURGH (AP) — Ben Roethlisberger and Antonio Brown connected on two second-half touchdowns and the Steelers pulled away from the Falcons.

Roethlisberger finished 19 of 29 for 250 yards and three scores, including a 9-yard strike to Brown in the third quarter and a 47-yard dart to the All-Pro wide receiver early in the fourth as Pittsburgh (2-2-1) put together its most complete performance of the season.

Matt Ryan passed for 285 yards and a touchdown but was also sacked six times.

ORCHARD PARK, N.Y. (AP) — Stephen Hauschka hit a 46-yard field goal as time expired. Buffalo’s defense forced three turnovers, and LeSean McCoy broke from a September slump with a season-best 85 yards rushing. McCoy sparked the decisive drive with a 13-yard catch on third-and-3. And backup running back Chris Ivory had a 9-yard run in getting the Bills across midfield.

Rookie quarterback Josh Allen scored on a 14-yard touchdown run but was held in check as a passer. He finished 10 of 19 for 82 yards and an interception.

The Titans struggled on offense in failing to build off a 26-23 overtime win over Philadelphia.