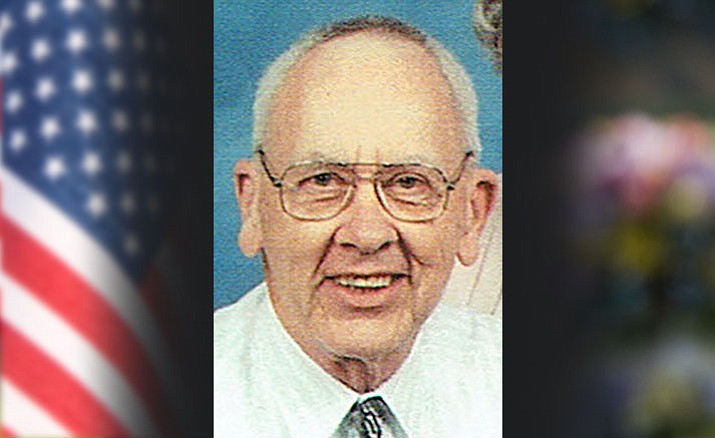 Lowell Edward Prescott, 92, peacefully passed away at home on Sept. 23, 2018, surrounded by his family. He was born to Frank H. and Edna Prescott of Anderson, Indiana.

Lowell attended preparatory school, Asheville School, in North Carolina, where he played football. He was drafted in the Army Air Corps in 1944. He then graduated from Michigan State University in 1950 with a degree in mechanical engineering. He was a member of Psi Upsilon Fraternity.

He worked at Chrysler as an engineer until his retirement in 1974. He relocated his family from Michigan to Prescott. The city was named after a distant relative, William Hickling Prescott. When Lowell visited the town, he liked it so much he moved there. He owned and operated a local business for several years.

In retirement, Lowell became an avid bridge player and hiker who hiked the Grand Canyon rim to rim. He helped develop the Acker Park trails with his best friend, Barrie Mayes. He was one of the founders of the Prescott Outings Club and served as president of for several years. Over the years, he was a Mason, a Lion, worked on Prescott planning and zoning, and other organizations.

He is survived by Donna, his wife of 52 years; his son, Frank Prescott; daughter, Frances Goldblum (Mark); and “Dad” to Karen Anderson (Mark) and Michael Bergman (Kelly); five grandchildren, Kathryn, Annie, Aidan, Alisa and William; and two great-grandchildren, Max and Rosie. Lowell is also survived by his sister, Helene Mosher; and his nieces and nephews. He was preceded in death by his parents; his brother, Frank H. Jr.; and his sister, June Thompson.

In lieu of flowers, Lowell has requested contributions to Juvenile Diabetes Research Foundation (JDRF) to support a diabetes cure for his granddaughter Annie Field (Roethel).

There will be a private memorial service at a later date, per Lowell’s request.