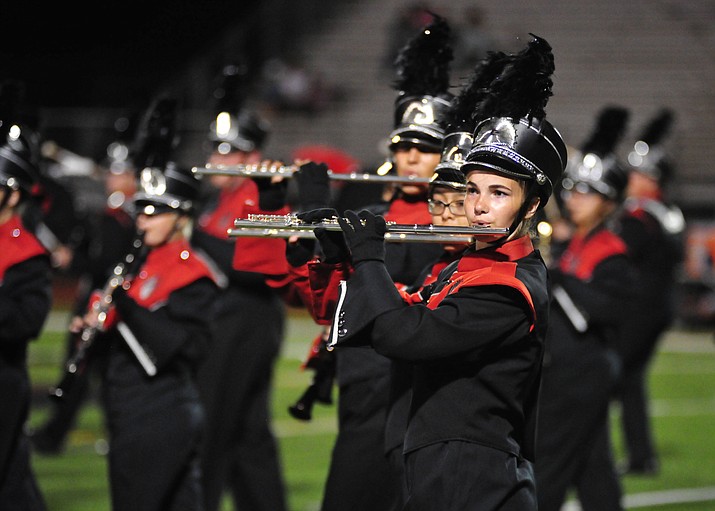 Bradshaw Mountain's marching band performs at halftime Sept. 28 in Prescott Valley. The Bradshaw Mountain football team welcomes cross-town rival Prescott in the annual "Black and Blue" rivalry game Friday, Oct. 5, 2018. The Bears enter ranked No. 2 in the state and are a perfect 7-0, and will look to win their eighth straight for the best start in school history. Kickoff between the Badgers and Bears is set for 7 p.m. (Les Stukenberg/Courier, file)

Last Week: Prescott — Austin Clark scored two touchdowns in the second half against Coconino but didn’t play a down in the second half due to a toe injury that sidelined the senior quarterback as the Badgers held on defensively for the victory; Bradshaw Mountain — Anthony Mata scored three rushing touchdowns in a 42-7 rout over visiting Flagstaff a week ago. Quarterback Josh Grant, starting his third straight game in the absence of Austin Gonzales, who is currently serving a suspension, ran for 76 yards and two scores in the blowout.

The Setting: Bradshaw Mountain looks to continue its winning ways as they try to stay perfect on the 2018 season and extend their winning streak to eight games. The Bears tied the 1986 team for the best start in school history a week ago, so look for the Bradshaw Mountain to have extra incentive Friday night to claim best start in program history of 8-0 at the expense of the rival Badgers. Prescott had little trouble with then No. 7-ranked Coconino last week, but lost starting quarterback Austin Clark for the second half due to a toe injury. Head coach Cody Collett said Clark practiced Wednesday and Thursday, and he will be a game time decision Friday night.