Heads up! Ban on using handheld cellphones while driving begins Nov. 2
Ordinance covers unincorporated Yavapai County; towns, cities to decide on their own 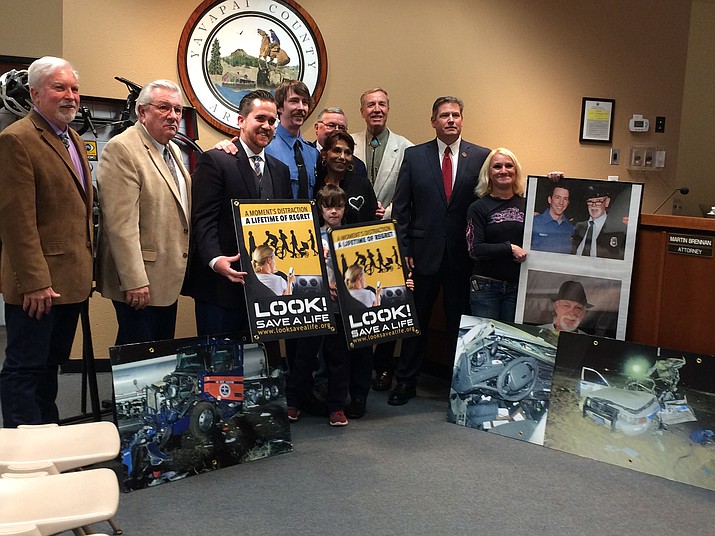 Following the Oct. 3 unanimous approval of an ordinance banning the use of handheld devices while driving in unincorporated areas of Yavapai County, county supervisors stand with supporters of the ban. (Sue Tone/Courier)

The heartrending stories of family members and victims who continue to suffer after distracted driving behavior caused injury or death to a loved one convinced the Yavapai County Board of Supervisors to approve unanimously a new ordinance Wednesday, Oct. 3, banning the manual use of cellphones or other portable communications devices.

The Hall family drove up from Peoria to talk about the late Tom Hall, husband, dad, and grandfather, who died when a driver took her eyes off the road to reach for a cellphone and hit him. Jon Hall, son, and Cathy Hall, Tom’s wife, and a grandson appeared before supervisors in support of the ordinance.

“What you will do today will affect everybody, positively,” Jon Hall said. He said he was dismayed that the driver who rear-ended his father, 74, who was driving a moped on Highway 69 in Prescott Valley, received only a civil traffic violation and paid $188 as a consequence.

The ordinance, which encompasses the unincorporated areas of Yavapai County, goes into effect 30 days after the board’s approval. It states, “A person shall not drive a motor vehicle while holding in his or her hand, typing on or otherwise manually operating a portable communications device.”

Seven exemptions include an allowance for hands-free mobile devices; use while pulled off the side of the road with the vehicle in park; to communicate an emergency to law enforcement or fire agencies, ambulance, or physician’s office; and on private property. Emergency vehicle drivers may use devices in the performance of official duties.

Daniel Mattson said he does not oppose a ban on texting and driving; however, he thinks this ordinance may go “a little too far.” He said he sometimes drives and is on the phone while responding to emergency situations that could involve potential suicide or an incident involving someone with a mental illness.

Supporters of a county ordinance banning the use of handheld communication devices while driving make sure the Yavapai County Board of Supervisors and those in the audience at the Oct. 3 board meeting are aware of victims of distracted drivers. (Sue Tone/Courier)

“I’m often on the phone, saying, ‘Please don’t commit suicide,’ as I’m driving to a crisis,” Mattson said. “It is not inappropriate. Sometimes we need phones.”

When a call comes in, he said he doesn’t know who is on the other end of his flip phone, and sometimes he has no ability to call back when the call comes from a hospital or the sheriff’s office.

Supervisor Jack Smith let Mattson know about the exemption that allows use of a mobile device while engaged in an emergency service, and encouraged Mattson to find a hands-free device to use with his phone.

Others spoke in support of the ordinance, some telling their personal stories, offering statistics, or stating their concern for fellow motorcyclists.

Brendon Lyons, a firefighter, drove up from Tucson to tell his story. He was riding his bicycle in a bike lane when a distracted driver going 45 mph hit him and a girlfriend in 2013. He suffered spinal, pelvic and traumatic brain injuries, then founded LOOK! Save a Life organization. Lyons implored the board to approve the ordinance.

Patricia David, member of the Bike Prescott group, also supports the ban. She spoke at the board’s meeting in Cottonwood this past month, and again encouraged the supervisors “to do whatever you can do to move this to the State legislature.” Distracted drivers claimed 3,450 lives in 2016, and 840 bicyclists were killed in 2017, David said. “This law does save lives. The data supports it.”

Worried about other motorcyclists, rider Christine Douglas said she appeared at the supervisors meeting “because it’s important.”

“Lately, I’ve been yelling at other drivers. I’m not very nice,” Douglas said referring to drivers she sees who are distracted or who are “hogging the fast lane.”

Prescott attorney Mark Kille said he wants to see a safer county even if it means less business for his firm — he has worked for 16 years representing injury victims of vehicle accidents, and wrongful death cases.

“I get to see the aftermath of these tragedies. I’m here to ask you to set an example for the rest of the state,” Kille told the board.

A violation of Ordinance 2018-2 may result in a civil traffic violation that carries a $100 penalty, plus other assessments and surcharges. If the motorist is involved in a motor vehicle crash, a civil penalty of $250 could result.