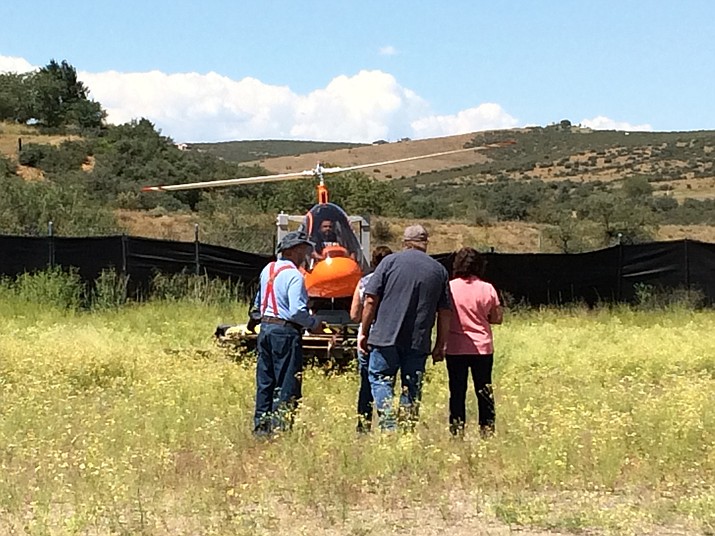 Luis Pena “flies” the Cicare SVH4 helicopter trainer as others take readings from decibel readers to find out how much noise it produces. Pena has applied for a use permit to establish a helicopter training school in Dewey. (Sue Tone/Tribune)

Dewey-Humboldt soon will be a destination for students wanting to earn a helicopter pilot license.

Town council members voted 5-2 to approve a use permit for a helicopter training facility along Highway 69 at its Sept. 18 meeting.

A trade school is an appropriate use in the C3-35 commercially zoned area, said Town Manager Tom Wilson before moving into the public hearing portion of the meeting. The property site is contiguous to three residential properties (a fourth is vacant), which necessitates a use-permit application.

The applicant, Luis Pena, a licensed pilot and U.S. Marine Corps veteran, provided a demonstration of a helicopter trainer on the vacant property on Sept. 7 for council, community and nearby residents to evaluate noise and dust levels.

Audio readings of the trainer at full throttle at that time registered between 64 and 74 decibels (dB). At the corners of the two nearby residences, the ambient reading was 60 dB. Noise produced from the flight trainer registered 45.8 dB.

Council was advised of a petition protesting the school. While she had not seen the petition, town attorney Susan Goodwin said a legal protest does not apply to conditional use permits, only to zoning matters.

During the public hearing, several residents opposed the school and others praised it.

Jackie Mattheis, a 25-year Dewey-Humboldt resident living in the neighborhood, said combined with the noise from the highway, the helicopter will create a “noise invasion” to the neighborhood that would be intolerable. She also mentioned an increase in dust.

Another resident of Omega Drive, a private road, talked about his concern over increased traffic and construction disruption. Carmen King, an Omega Street resident, said she wished Pena had knocked on her door before requesting the use permit.

“It’s not personal, but we don’t want you,” another resident said to Pena.

She added that if council approves the use permit, the community will file a referendum.

Other concerns presented by residents included parking and hours of operation. One speaker asked if the school could be limited to operating Monday through Friday and eliminate Saturday hours. Gary Mortimer suggested Pena find a different location for his business.

Some speakers supported the school, especially the two annual scholarships the school will offer to local students, and the offer to help maintain Omega Drive.

“He’s jumped through every hoop he’s been asked to do. It’s time to make a decision and the proper decision is to allow the school to come in,” said one resident.

After lengthy discussion, the council approved the use permit 7-5 with council members Victoria Wendt and Amy Simmons opposing the motion.

Stipulations to the permit include: limiting the operation of trainer to 9 a.m. to 5 p.m. Monday through Friday with no hours on Saturdays, the trainer shall not exceed 80 dB, monthly monitoring of the noise level for the first six months, submission of a dust mitigation plan prior to approval of a building permit, submission of a landscaping plan and a plan for road surface prior to the issuance of a certificate of occupancy, enclosing the flight trainer with a building when not in use, increasing the fencing by two feet on the north and west sides of the property with opaque screening, on-site parking for employee and student vehicles, and allowing a five-year duration for the permit with an application for renewal to follow the same process as applying for a new use permit.