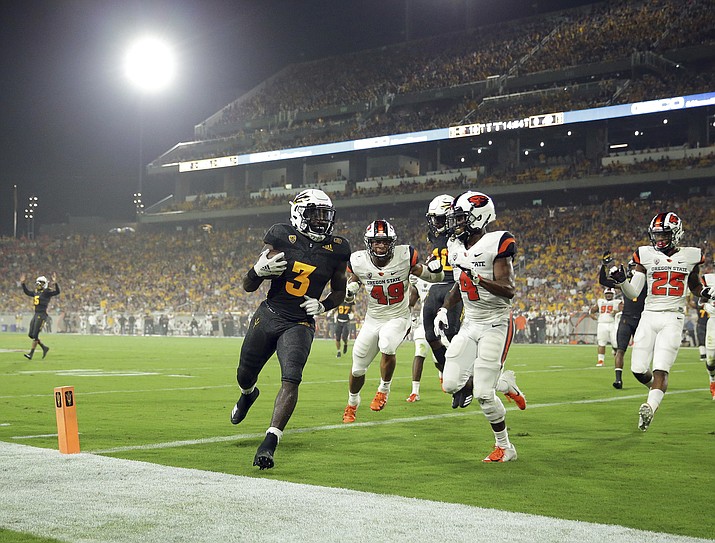 Eno Benjamin turned in the best rushing performance in the Football Bowl Subdivision this season and became the first Arizona State player to go over 300 yards when he ran 30 times for 312 against Oregon State.

The total was the highest since Arizona quarterback Khalil Tate went for 327 yards against Colorado last October.

Benjamin smashed the ASU single-game rushing record of 250 yards by Ben Malone against Oregon State in 1973, and his total ranks eighth all-time on the Pac-12 chart. Benjamin also set an ASU record with 185 rushing yards by halftime, making him the first Sun Devils player to run for 100 through two quarters since 2011.

The sophomore from Wylie, Texas, ran for three touchdowns and also caught three passes for 27 yards and a TD. His 339 all-purpose yards are most in the nation this season. Oregon State has given up the top two rushing games of the season. Last week, Arizona’s J.J. Taylor went for 284 yards on 27 carries against the Beavers.

Joining Benjamin as 200-yard rushers were Oregon State freshman Jermar Jefferson and Clemson’s Travis Etienne. Jefferson’s 254 yards on 31 carries against Arizona State ranks third-best in the nation. He also had a 238-yard night against Southern Utah of the Football Championship Subdivision on Sept. 8. Etienne ran 27 times for a career-high 203 yards and three touchdowns, including the game-winner, against Syracuse.

There were three 90-plus-yard pass plays. Alabama’s Mac Jones connected with Jaylen Waddle for 94 yards against Louisiana-Lafayette, Penn State’s Trace McSorley hooked up with KJ Hamler for 93 against Ohio State and SMU’s William Brown and Tyler Page teamed for a 92-yarder against Houston Baptist.

GOING THE OTHER WAY

Air Force’s Zane Lewis had the longest interception return in the nation when he took one back 99 yards against Nevada. The Falcons have scored a non-offensive touchdown in all five games.

Texas A&M freshman Jashaun Corbin became the fifth player in the country to return a kick 100 yards, doing it on the opening kickoff against Arkansas. It was the Aggies’ first kick return for a touchdown on an opening kickoff since 1994.

STAT OF THE WEEK

Washington’s Jake Browning completed 23 of 25 passes against BYU for the highest completion rate (92 percent) of the season. He was one pass short of matching the NCAA record for completion percentage in a game. Georgia’s Greyson Lambert was 24 of 25 against South Carolina in 2015.