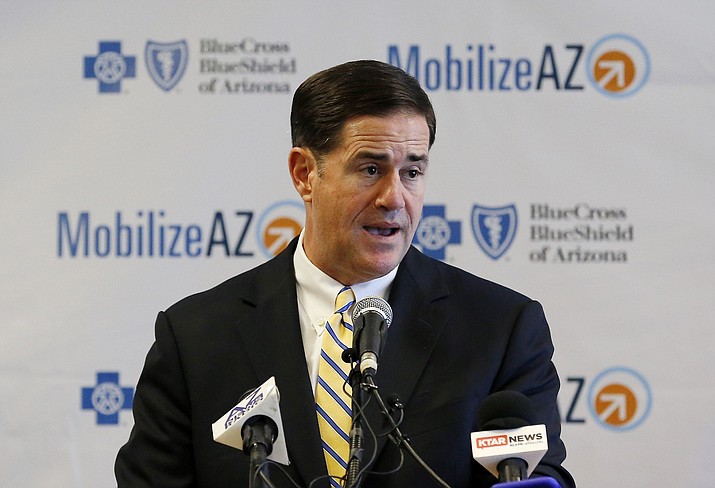 In this Aug. 14, 2018, file photo, Republican Arizona Gov. Doug Ducey speaks at a news conference in Phoenix. Proponents of Proposition 126 want to put a provision in the state constitution to forever preclude the Legislature from expanding the current sales tax base to services that are not already taxed. (Ross D. Franklin/AP, file)

PHOENIX — To hear the proponents of Proposition 126 tell it, Arizona lawmakers are chomping at the bit to tax medical services, child care and even veterinary bills.

Never mind that lawmakers already can do that now -- and have not.

But the sponsors, financed by Arizona Realtors and their national parent organization, want to put a provision in the state constitution to forever preclude the Legislature from expanding the current sales tax base to services that are not already taxed. And they have built a warchest -- $6.1 million as of the last campaign finance report filed in the middle of August -- to get voters to approve.

For the moment, the campaign operating under the umbrella of Citizens for Fair Tax Policy is the only game in town on the ballot measure. There is no organized opposition.

But the proposal has generated some resistance from an interesting and unlikely alliance, ranging from the Grand Canyon Institute which looks for ways to increase funding for public education, to Andrew Clark, the state director for Americans for Prosperity, a political action group funded by the conservative Koch brothers.

And even Gov. Doug Ducey, who is campaigning for reelection on a pledge he will never raise taxes, does not think a constitutional ban on taxing services is a good idea.

“He does not believe that tax policy should be set at the ballot,’’ said press aide Daniel Scarpinato. “It’s permanent and unchangeable and he would encourage folks to vote ‘no.’ ‘’

As it turns out, this is one of the few issues where the Republican incumbent finds common ground with his Democratic challenger. David Garcia also opposes the constitutional change.

“It ties the hands of the governor and Legislature to make important budgetary decisions, particularly dealing with the education crisis we’re in,’’ said spokeswoman Sarah Elliott. “We think that’s going to be a problem.’’

The commercials funded by the Realtors are not subtle.

“The politicians are looking for more money,’’ viewers are told as they watch a Godzilla-sized man in a suit and tie vacuum up dollar bills from office buildings, a woman waiting at a veterinarian’s office with her dog, a man laying on a hospital stretcher and a child being dropped off at a daycare center.

“If they have their way, it could stall the economy and hurt small businesses,’’ the announcer says.

What’s behind the proposal appears to have been an ill-fated 2016 bid by Rep. Rep. Darin Mitchell, R-Goodyear, to expand the sales tax base to certain services.

The biggest chunk - about $100 million a year in revenues - would have come from taxing auto, home, and personal property maintenance and repair.

Right now the parts are taxable. So the state’s 5.6 percent levy, plus any local sales taxes, are applied to the cost of, say, a new air conditioning compressor. But the cost of the service -- the labor in installing it -- is not.

Mitchell’s bill also would have taxed some other services, ranging from child care and driving schools to barber shops, parking fees, health clubs and “death care’’ -- though not medical or veterinary services.

There was, however, a flip side: Mitchell proposed to reduce income tax rates -- by half for the state’s lowest income residents and smaller amounts for those in other tax brackets.

The net result after the pluses and minuses would have been a $584.6 million increase in state revenues.

But Mitchell’s bill was stillborn as he could not even get a hearing before the House Ways and Means Committee. And opponents of expanded taxes used his sponsorship to quash his reelection bid in the August Republican primary.

So opposed are GOP lawmakers to even looking at the issue that they denied a hearing to a proposal by state Sen. Steve Farley, D-Tucson, to at least look at all of the sales tax exemptions and determine whether they make sense.

And there’s something else standing in the way of a new tax on services: A 1992 constitutional provision requires a two-thirds vote of both the House and Senate to approve anything that results in a net increase in state revenues.

But Wes Gullett, whose consulting firm is running the campaign for the Realtors, said they have seen what has happened elsewhere -- including other “red’’ states.

And just this year, Kentucky lawmakers expanded the sales tax base to things like pet grooming, car repairs, limo rentals and fitness classes.

Gullett also pointed out that the protection of the need for a two-thirds vote does not exist if the final bill reduces taxes elsewhere in equivalent dollar amounts.

And he said there’s a fundamental difference between a tax on, say, clothing, than there is on a tax on gym memberships, stock broker services or even the commissions of real estate agents.

“They have an income tax,’’ he said. “And now you’re saying, ‘We want to tax you again for that same work, for your same labor.’ And that’s not fair.’’

Gullett dismissed the opposition, particularly from the conservative side of the spectrum.

“Tax policy is frequently made at the ballot,’’ he said of Ducey’s concerns, though the only example he cited was a 2010 vote to approved a constitutional amendment which enacted a temporary 1-cent hike to sales taxes during the recession.

As to Clark, Gullett said his organization has ulterior motives.

“The goal is either to pay for vouchers or lower the (state) income tax with tax reform and spread that tax onto other people,’’ he said, the “other people’’ being owners and operators of service businesses.

Clark said the voucher claim is pure fantasy. But he did acknowledge that his organization does want to keep the door open for a tax on services.

“We all know that goods as a share of the economy is shrinking,’’ he said. And that has implications.

Not all the arguments submitted to the Secretary of State’s Office in favor of Proposition 126 came from the Realtors.

“If a new service tax were passed, it could have a very negative impact on all pet owners that care for their pets,’’ said Wayne Anderson, CEO of AzPetVet, in his statement of support. And Tammie Neary, owner of Beauty Bungalow in Phoenix said she does not want her customers “to pay more than what is fair for a quality haircut.’’

But of 10 support statements where the author’s affiliation is not identified, nine were either Realtors or working for the organization.

“We’re not hiding it,’’ Gullett said of the Realtors role in the campaign.

The Realtors are no strangers to funding the kind of preemptive strike that is in Prop. 126.

A decade ago the same group spent $5.8 million to convince voters to constitutionally ban imposition of a real estate transfer tax.

Arizona did not have one at the time. But proponents, in a preview of what is happening this year, argued the move was necessary to keep lawmakers, potentially looking for new sources of revenue, from deciding a transfer tax was appropriate.