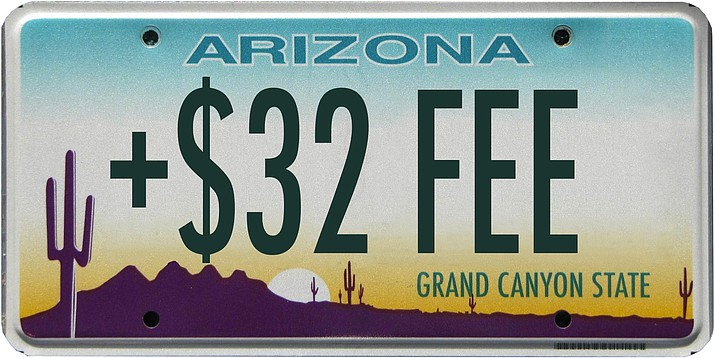 PHOENIX — That balanced budget that Gov. Doug Ducey said wouldn’t raise taxes is going to cost Arizona motorists an extra $32 a year for every car, truck and motorcycle they have.

And its more than 50 percent higher than Arizonans were told when the plan was first adopted earlier this year.

The fee is designed to have motorists pay directly for the costs of the Highway Patrol rather than having the agency funded out of gas tax and existing vehicle registration fees.

That is supposed to free up cash from the gas tax to instead be used for road construction and repair. And that, in turn, means that general tax collections that had been used for those purposes could instead pay for other priorities of the governor and Legislature.

There’s a reason the fee, approved by lawmakers earlier this year, is a surprise. And it’s political.

The Arizona Constitution requires a two-thirds vote of both the House and Senate for any new or increased tax or fee. And there were not enough votes in either chamber to do that.

So lawmakers and the governor used a loophole of sorts: They directed John Halikowski, head of the state Department of Transportation, to figure out how much the Highway Patrol division of the Department of Public Safety costs to operate. And then Halikowski was directed to impose a new fee to cover that cost.

In passing the buck, so to speak, by refusing to set the fee themselves, lawmakers then needed just a simple majority. But the fee that was announced Thursday surprised Rep. Noel Campbell, R-Prescott, who came up with the idea.

“That amount was not broached,” he told Capitol Media Services, saying “$17 or $18 was what the fee they told us we’d be dealing with.”

That’s also the number Campbell gave to colleagues when they approved the plan. The Prescott lawmaker is not happy with this week’s announcement. “We gave him the authority,’’ he said of Halikowski.

“We hope that he does the right thing,” Campbell continued. “I’m certainly going to talk to him about that and find out why.”

It’s not only Campbell who got a surprise when ADOT set the fee. In preparing the plan earlier this year legislative budget analysts figured that Highway Patrol would need about $135 million a year. Even with a 10 percent buffer, that would come to just $148 million.

And that, they figured, would cost vehicle owners $18.06 a year.

ADOT spokesman Doug Nick said it turns out the Highway Patrol budget will be $168 million. Add 10 percent to that and the fee needs to raise $185 million.

And there’s something else: Legislative budget staffers figured the cost would be divided up among 8.3 million registered vehicles.

But Nick said the owners of many of the vehicles on the road have prepaid their registrations for two or five years. So they can’t be taxed until they renew.

Add to that vehicles that are exempt from the levy, like government vehicles and those owned by nonprofit entities, and that $185 million has to be raised from the owners of 5.8 million vehicles. Do the math and you come up with $32.

The whole money-making maneuver — including the decision to leave the fee up to the ADOT director — is the culmination of a multi-year effort to find new dollars to help build new roads and repair existing ones.

That is supposed to be financed largely through a gasoline tax. But that 18-cent-a-gallon levy has not been raised since 1991 when gasoline was in the $1.20-per-gallon range.

And while there are more vehicles on the road, they also are more fuel efficient, with the number of road miles driven — and the wear and tear on the roads — increasing faster than new revenues.

What has made matters worse is that the current and former governors and lawmakers, looking to balance the budget, have siphoned off some of those gas tax revenues to pay for the Highway Patrol. That left fewer dollars for both urban and rural transportation needs.

There were several lawmakers who were less than pleased with how the fee increase was crafted.

Sen. Warren Petersen, R-Gilbert, called it “the worst kind of tax increase” because it was being done without any idea of what it would cost motorists. “We’re going to tell an unelected bureaucrat to go ahead and raise these fees to whatever he wants to,” he said.

“I just can’t in good conscience pass something I don’t know what it is exactly,” she said.