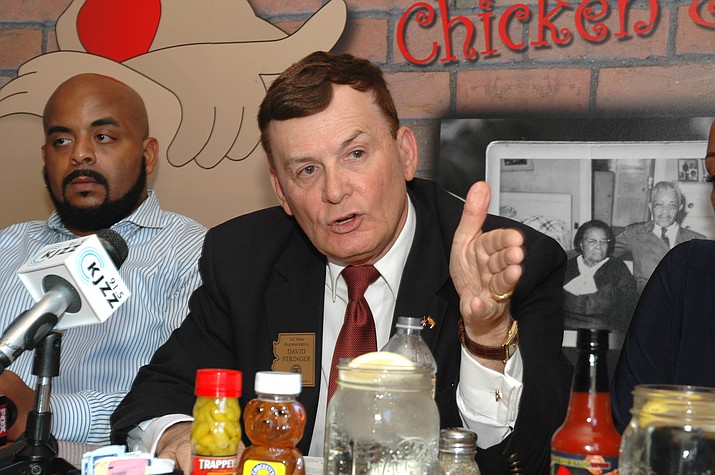 PHOENIX — The latest comments by a Prescott Republican lawmaker about race, immigration and assimilation have cost him the chairmanship of a committee he has sought for years.

Incoming House Speaker Rusty Bowers said Rep. David Stringer agreed at his request to resign his post Friday after publication by Phoenix New Times of remarks he made to students two weeks ago at Arizona State University following a lecture by Prof. Don Critchlow, a specialist on political history, on the election results. Stringer said assimilation doesn’t work with African-Americans and other racial groups “because they don’t melt in, they don’t blend in, they always look different.”

Stringer, questioned by students, also said he doesn’t know if the difference in appearance matters to him. But he said the “white flight” from some cities proves it matters to others.

He also said there is a “pretty significant burden” on Arizona taxpayers for having to teach English to students who come to school without that being their first language and said that Hispanics vote Democratic because they want more immigration to bring “more of their co-religionists, their own people like them, into the country.”

“Rep. Stringer’s comments are vile and won’t be tolerated,” Bowers said Friday in a prepared statement.

Bowers said he gave Stringer, a former criminal defense attorney, the “critical assignment” as chair of a newly created Sentencing and Recidivism Reform Committee, a committee that Stringer asked the new speaker to create.

“These comments render him incapable of performing his duties as chair,” Bowers said.

Stringer did not immediately return calls and messages seeking comments.

The latest comments come just months after Stringer drew attention for warning that immigration “represents an existential threat to the United States” and needs to be curtailed before the country is irrevocably altered.

That June speech to the Republican Men’s Forum in Prescott was the first time Stringer said that new immigrants — especially those from non-European countries — do not assimilate as easily as those who came a century earlier.

Stringer also said the rapid influx of Hispanic children has made school integration impossible because “there aren’t enough white kids to go around,” not only because of the pure numbers of immigrants but because Anglo parents choose to either move to new areas or simply put their children in private or charter schools.

Those remarks resulted in calls for his resignation by state Republican Party Chairman Jonathan Lines, a move later endorsed by Gov. Doug Ducey. And current House Speaker J.D. Mesnard abolished a special committee on criminal-justice reform that Stringer had asked him to establish.

Since that time Stringer was re-elected by a healthy margin, getting more than twice as many votes as the Democrats in the race for the two seats from the district, though seatmate Noel Campbell, R-Prescott, outpolled him.

Bowers, newly elected as speaker, agreed last month to set up the formal standing committee on the issue. An aide to Bowers said plans are to keep the committee intact, at least for the time being, albeit without Stringer at the helm.

This time around there was no resignation call from Lines but instead a slap.

“What we see from David Stringer is an unfortunate pattern of him putting his foot in his mouth with racist commentary which can only be attributed to a perspective that is out of touch with reality,” the chairman said in a prepared statement.

But Ducey press aide Patrick Ptak said the views of his boss have not changed.

“As the governor has previously stated, this type of rhetoric should disqualify someone from serving in the Legislature,” Ptak said.

In the latest incident, Stringer is asked by sophomore Stephen Chumra, who was at the lecture that Stringer attended, about the immigrants that came to this country in the past, including the professor’s own great-grandfather who came from Poland.

“They were all European,” Stringer responded. “By the second or third generation, everybody looks the same, everybody talks the same. But that’s not the same as African-Americans and other racial groups because they don’t melt in, they don’t blend in, they always look different.”

Asked whether that matters, Stringer said “maybe it doesn’t.”

“But it seems to matter to a lot of people who move out of Detroit and move out of Baltimore,” he continued, the former where more than 80 percent of residents are black, the latter where African-Americans make up close to two-thirds of the population. “We have white flight in this country.”

And does that difference in appearance matter to him? “I don’t know, I honestly don’t know,” Stringer responded, saying he was having a philosophical conversation.

But in both Detroit and Baltimore, he said, the situation is different than in Arizona and other places where the issue is rapid immigration from south of the border. “It’s producing tensions and it’s producing burdens on our system,” Stringer said, saying that English as a second language classes are increasing the cost of operating public schools.

“So that’s a burden on the taxpayers,” he said. “And it’s a pretty significant burden.”

The bottom line, Stringer said, was to “slow it down” as far as immigration is concerned “to create more opportunity for assimilation.”

Stringer also said it’s no surprise that Hispanics, “even middle-class Hispanics,” tend to vote for Democrats, saying “their No. 1 issue is immigration and bringing more of their co-religionists, their own people like them, into the country.”

“So you’re never going to get Hispanics elected as Republicans as long as the Republican Party is for border security and lowering levels of immigration,” Stringer said. “They’re not that stupid.”

He also commented on how African-Americans and Asian-Americans who are “a very educated culture” vote heavily for Democratic candidates.

The Rev. Jarrett Maupin, who agreed after the June remarks to set up a public meeting where Stringer could explain himself to members of the African-American community, made it clear Friday he was not about to come to the lawmaker’s defense or give him another chance. Maupin said if Stringer does not resign House leadership should move to eject him “for acts of moral turpitude and demonstrated ethical bankruptcy.”

Noting the most recent expulsion being Rep. Don Shooter, R-Yuma, for sexual harassment of colleagues and others, Maupin said, “Stringer’s demonstrated bigotry and racism is just as bad, if not worse, than the actions that have led to other members’ expulsions.”