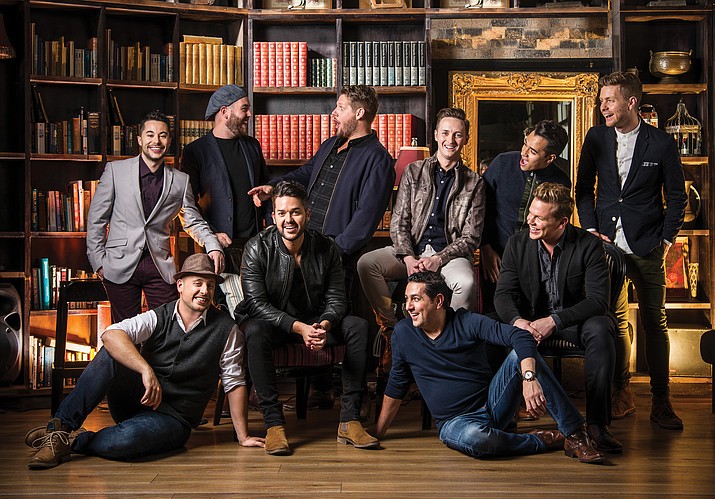 Their tour, titled “Home for the Holidays” provides audiences with a combination of the group’s stellar singing with unmistakable charm and onstage camaraderie, according to a news release from Yavapai College Marketing Specialist Michael Grady. They are one of the world’s premiere classical-crossover groups and have performed for more than 20 years earning six platinum and gold records, headlined more than 2,500 concerts and shared the stage with numerous musical legends.

“There’s nowhere in the world The Ten Tenors would rather be performing ‘Home for the Holidays’ than in the USA, during the holiday season,” the release states. “With a generous mix of festive favorites and modern hits, The Ten Tenors walk audiences through a musical winter wonderland that truly captures the essence of the holidays.”

The New York Times stated that the Ten Tenors’ “unique mix of the traditional and unconventional offers a fresh and highly-original take on the staid traditions of opera.”

Their latest album “Wish You Were Here,” contains music by iconic musicians who have passed on such as Prince, David Bowie, John Lennon and Freddy Mercury and includes traditional standards like “Joy to the World” and “Oh Holy Night” along with Lennon and Yoko Ono’s “Happy Xmas (War is Over)” and Mariah Carey’s “All I Want for Christmas Is You,” according to a separate news release from the group’s publicist Ben Merlis.

At the Yavapai College Performing Arts Center, 1100 E. Sheldon St., The Ten Tenors will take audiences on a journey from the commercial and the traditional, “Winter Wonderland” and “Oh, Holy Night” to the surprising and Australian, “Bohemian Rhapsody” and “Waltzing Matilda” and all points in between, according to Grady’s release.

Paul Gelsumini, member of The Ten Tenors and the group’s musical director said in Grady’s release that audience should leave whatever conceptions they have at the door and be prepared to have fun.

“So many people come to our show the first time expecting arias or standard crossover repertoire,” Gelsumini said. “But it only take sone song for them to realize this is not like any other tenor show out there and they better be ready to laugh, cry and party like they are at a rock concert.”