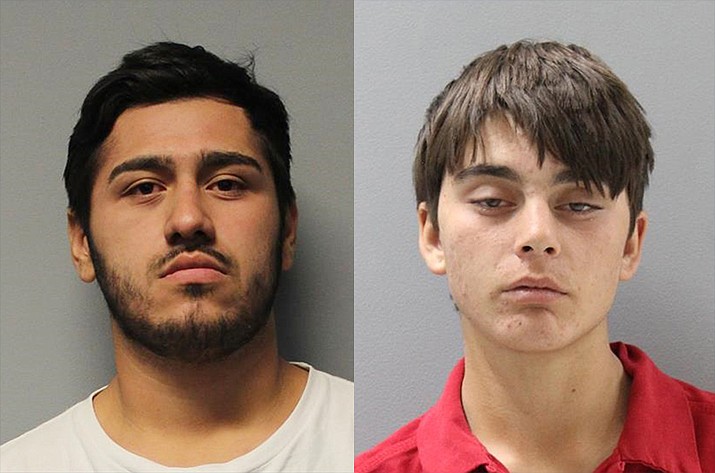 Alfredo Campa, left, from Prescott Valley and Kenneth Moran from Prescott were arrested on Wednesday, Nov. 21, on charges of possession and transportation of fentanyl for sale. (Yavapai County Sheriff's Office/Courtesy)

Two young men from the quad-city area have been arrested for the alleged possession and transportation of fentanyl for sale.

Over the past several months, detectives from the Partner’s Against Narcotics Trafficking taskforce (PANT) developed information that Campa was involved in the transportation, sales, possession and use of the narcotic drug fentanyl, according to a YCSO news release.

During the traffic stop, a YCSO K9 was deployed and alerted to the odor of drugs coming from the vehicle. In a subsequent search, 13 pills were found in the center console, according to the news release. The pills were described as small, round, blue in color and stamped with an “M” on one side and “30” on the other side. These pills matched the description of pills involved in recent overdose cases in Yavapai County.

Also in the center console were pieces of foil with burnt residue, indicating some of the contraband had been smoked, D’Evelyn said. Following his arrest, Moran indicated the pills had been purchased in the Phoenix area and admitted smoking one of the pills with Campa on the way back to the Prescott area. Campa claimed the pills were not his but knew they were in the car.

A total of 23.5 pills were recovered during the investigation, according to the release.

D’Evelyn said PANT is continuing to focus on anyone dealing fentanyl in Yavapai County and encourages the public to call Yavapai Silent Witness at 1-800-932-3232 if they have information on dealers and users. A direct tip to Silent Witness leading to the arrest of a verified fentanyl dealer becomes eligible for a $1,000 cash reward.