(NEW) THE POSSESSION OF HANNAH GRACE - A shocking exorcism spirals out of control, claiming the life of a young woman. Months later, morgue worker Megan Reed takes delivery of a disfigured cadaver during the graveyard shift. Locked inside the basement corridors, Megan's horrifying visions soon lead her to believe that the body is possessed by a demonic force. Stars Shay Mitchell, Grey Damon, Kirby Johnson, Stana Katic. R – mystery, thriller 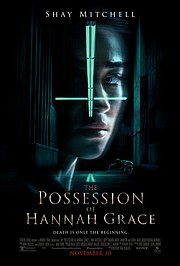 CREED II - In 1985, Russian boxer Ivan Drago killed former U.S. champion Apollo Creed in a tragic match that stunned the world. Against the wishes of trainer Rocky Balboa, Apollo's son Adonis Johnson accepts a challenge from Drago's son -- another dangerous fighter. Under guidance from Rocky, Adonis trains for the showdown of his life -- a date with destiny that soon becomes his obsession. Now, Johnson and Balboa must confront their shared legacy as the past comes back to haunt each man. Stars Michael B. Jordan, Sylvester Stallone, Tessa Thompson, Wood Harris, Phylicia Rashad, Dolph Lundgren. PG-13 – drama, sport

WIDOWS – A police shootout leaves four thieves dead during an explosive armed robbery attempt in Chicago. Their widows -- Veronica, Linda, Alice and Belle -- have nothing in common except a debt left behind by their spouses' criminal activities. Hoping to forge a future on their own terms, Veronica joins forces with the other three women to pull off a heist that her husband was planning. Stars Viola Davis, Michelle Rodriguez, Elizabeth Debicki, Cynthia Erivo, Colin Farrell, Brian Tyree Henry, Daniel Kaluuya, Jacki Weaver, Carrie Coon, Robert Duvall, Liam Neeson. R – drama, mystery

INSTANT FAMILY – When Pete and Ellie decide to start a family, they stumble into the world of foster care adoption. They hope to take in one small child, but when they meet three siblings, including a rebellious 15-year-old girl, they find themselves speeding from zero to three kids overnight. Now, Pete and Ellie must try to learn the ropes of instant parenthood in the hope of becoming a family. Stars Mark Wahlberg, Rose Byrne, Octavia Spencer. PG-13 – Comedy

BOY ERASED - Jared Eamons, the son of a small-town Baptist pastor, must overcome the fallout after being outed as gay to his parents. His father and mother struggle to reconcile their love for their son with their beliefs. Fearing a loss of family, friends and community, Jared is pressured into attending a conversion therapy program. While there, Jared comes into conflict with its leader and begins his journey to finding his own voice and accepting his true self. Stars Lucas Hedges, Nicole Kidman, Joel Edgerton, Joe Alwn, Xavier Dolan, Troye Sivan, Cherry Jones, Flea, Russell Crowe. R - drama

THE GRINCH – The Grinch and his loyal dog, Max, live a solitary existence inside a cave on

Mount Crumpet. His main source of aggravation comes during Christmastime when his neighbors in Whoville celebrate the holidays with a bang. When the Whos decide to make Christmas bigger and brighter, the disgruntled Grinch realizes there is one way to gain peace and quiet. With help from Max, the green grump hatches a scheme to pose as Santa Claus, steal Christmas and silence the Whos' holiday cheer once and for all. Stars Benedict Cumberbatch, Rashida Jones, Kenan Thompson, Cameron Seely, Angela Lansbury. PG – fantasy, musical

THE NUTCRACKER AND THE FOUR REALMS – Young Clara needs a magical, one-of-a-kind key to unlock a box that contains a priceless gift. A golden thread leads her to the coveted key, but it soon disappears into a strange and mysterious parallel world. In that world, she meets a soldier named Phillip, a group of mice and the regents who preside over three realms. Clara and Phillip must now enter a fourth realm to retrieve the key and restore harmony to the unstable land. Stars Kiera Knightley, Mackenzie Foy, Eugenio Derbez, Matthew Macfadyen, Richard E. Grant, Misty Copeland, Helen Mirren, Morgan Freeman. PG – drama, fantasy 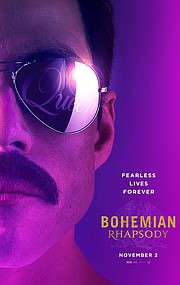 one of the most beloved entertainers on the planet. The film traces the meteoric rise of the band through their iconic songs and revolutionary sound. They reach unparalleled success, but in an unexpected turn Freddie, surrounded by darker influences, shuns Queen in pursuit of his solo career. Having suffered greatly without the collaboration of Queen, Freddie manages to reunite with his bandmates just in time for Live Aid. While bravely facing a recent AIDS diagnosis, Freddie leads the band in one of the greatest performances in the history of rock music. Queen cements a legacy that continues to inspire outsiders, dreamers and music lovers to this day. Stars Rami Malek, Lucy Boynton, Gwilym Lee, Ben Hardy, Joseph Mazzello, Aidan Gillen, Tom Hollander, Mike Myers. PG-13 – drama, biography

A STAR IS BORN – Seasoned musician Jackson Maine discovers -- and falls in love with -- struggling artist Ally. She has just about given up on her dream to make it big as a singer until Jackson coaxes her into the spotlight. But even as Ally's career takes off, the personal side of their relationship is breaking down, as Jackson fights an ongoing battle with his own internal demons. Stars Bradley Cooper, Lady Gaga, Andrew Dice Clay, Dave Chappelle, Sam Elliott. R – drama, romance