Williams: My nap will have to wait 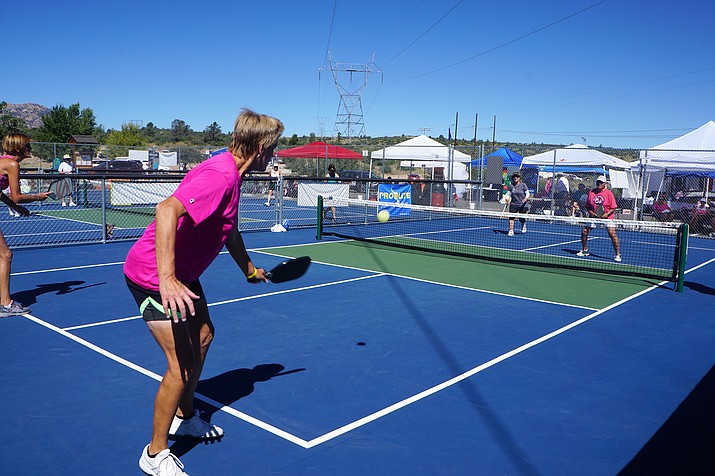 Local pickleball player Sue Brogaard strikes the ball during women’s doubles play at the Pioneer Park pickleball courts Friday morning, Sept. 14. Brogaard was among the 200 or so competitors to take part in the Prescott Mile High Matchup tournament — one of the growing number of events scheduled at the courts. (Cindy Barks/Courier)

I’ve spent a lot of my life playing sports. First it was little league baseball, sandlot football, handball, squash, pick-up basketball games, tennis, then softball for decades, then ping-pong. I assumed when the table tennis paddle became too unwieldy, I’d hang it up and head for the showers, the Barcalounger and remote control.

But it isn’t to be. Apparently, there’s a new game out there for athletes who enjoy racket sports, but that geriatrics can play, too. It’s called pickleball.

Of course, before learning anything about it, one must ask about the silly name. Does one swing a pickle instead of a paddle or racket? Does one throw pickles or dodge them? After a sweaty, rousing round, do pickle-ballers sit around the clubhouse sucking on gherkins?

At least one account tells us that the inventor named the game for Pickles, his cocker spaniel who frequently ran away with the ball. An alternate story attests that pickleball is named for the pickle boat, which is the boat that comes in last with its catch. I find this latter testimony to be extremely unsatisfying unless there is a strong connection between smacking a whiffle-like ball with a paddle and pulling in Dungeness crab over the gunnels of a fishing boat off the shores of a small fishing village in Oregon.

The cocker spaniel legend makes a little more sense to me since the family that invented the game in 1965 did, in fact, have a dog named Pickles. The fact that Pickles may have joined the family two years after pickleball was launched is just a niggling detail as far as I’m concerned.

I’ve learned that pickleball is, basically, a combination of badminton, table tennis and tennis. It’s played on a court with the same dimensions as badminton, while the net and rules are similar to tennis.

A whole culture has grown up around the pickleball phenomenon. The USAPA (USA Pickleball Association), the official sanctioning body, promotes the game and provides tournament and training information. Be sure you don’t confuse the USAPA with the other USAPAs out there that are The U.S. Army Publishing Agency, U.S. Army Public Affairs or, my favorite, Uniting and Strengthening America by Providing Appropriate … This is not a typo. Definitions of this acronym do not indicate Appropriate WHAT! Vitamins? Carbs? Rodents? Hives?

The USAPA Shop offers all types of “game appropriate” clothing and gear all, coincidentally, emblazoned with the USAPA logo. SFIA (Sports & Fitness Industry Association) says there are more than 2.5 million pickleball participants in the U.S. I love acronyms and associations. I think I’ll form the USVAAO (United States Virulently Anti-Association Organization) that bans grouping together for any purpose. But that’s another column for another day.

Now instead of contemplating an afternoon nap, I have to order my official pickleball jersey, shorts, shoes, socks, hat, paddle, sling, tourniquet and crutches. Oh, and I have to make sure my accident insurance is up to date.

Gene, a neighbor, tells me there is a bevy of pickleball courts in Prescott’s Pioneer Park. This guy, Gene, is in his late 70s and in senior softball tournaments 24/7. We’re scheduled to drive over to Pickleball Park one day soon.

I wonder if there’s a prone version of the game?