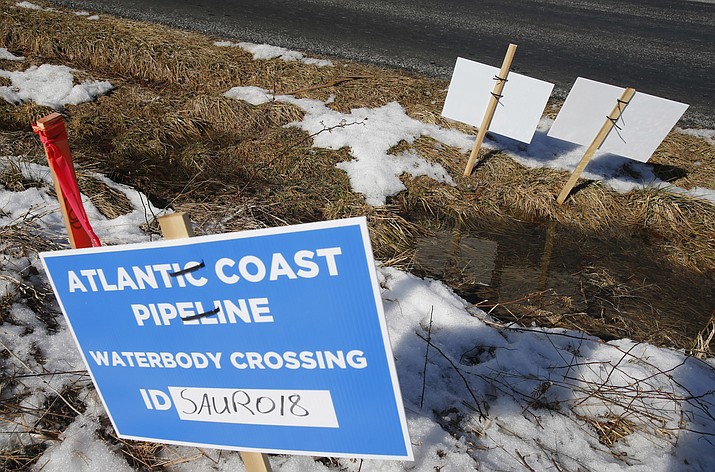 Downed trees and surveyors sticks mark the route of the Atlantic Coast Pipeline in Deerfield, Va., Thursday, Feb. 8, 2018. Work is progressing on clearing a path for the pipeline. (Steve Helber/AP, File)

Thanks to technology, innovation, and deregulation, the American energy sector is thriving. On the one hand we’re constantly inventing ways to do more with less on the consumption side while producing so much new oil and natural gas we’ve become a net exporter rather than importer.

Most people would consider that good. It’s keeping prices comparatively low. The price of a gallon of regular gasoline is just above $2 (something the naysayers said would never happen again). The natural gas so many of us use to heat our homes is equally cheap, leaving a higher percentage of household disposal income available for food, clothing, and the outrageous insurance premiums forced on so many of us by Obamacare.

Unfortunately, not everyone is on board with the good news. Congressional Democrats are planning to introduce legislation repealing the provision of last December’s tax bill that opened Alaska’s Arctic National Wildlife Refuge (ANWR) to oil exploration. And the so-called environmentalist groups backed by dark money liberal billionaires are doing all they can to stop the Keystone and Atlantic Coast pipelines from moving forward.

Rather than promote our energy independence, these climate alarmists and intellectual luddites want to take America back to the days of gasoline rationing, high electric bills, and energy imports. They’re willing to turn their back on the creation of good jobs at good wages that will support families and communities throughout the nation.

Take the proposed 600-mile long Atlantic Coast Pipeline, which when completed will be used by public utilities in Virginia, North Carolina and West Virginia to supply clean-burning natural gas as the fuel of choice to meet the growing energy needs of consumers and businesses in the region. The project’s on track for completion by the end of next year, which will allow public utilities to meet growing demand for cleaner electricity, residential home heating and power for local businesses. Along the way it’s going to bring lots of jobs to a part of the country that desperately needs them.

To the environmentalist crowd, plenty. They’re still advocating for the “all of the above ground” energy policies of the Obama era. They’re pushing for wind and solar and other so-called renewables that are too expensive to build and operate and can’t produce the power needed to do what the plants that will be supplied by the Atlantic Coast pipeline can do easily. The delays they’ve caused and continue to push for are a smokescreen intend to stop the pipeline from being constructed, just like the phony claims about ancestral were used to hold up for months energy development in the upper Midwest.

The development of new energy infrastructure is key to America’s energy independence. Adding new pipelines will be like going from 3G to 4G on the Internet: It will enable us to do more. As investor advisor Ross Gerber recently noted in Forbes, the infrastructure we now have “simply cannot support the current level output in terms of transporting, distributing and storing more oil and natural gas, and as such, it must be upgraded.”

Gerber, it should be said, is an advocate for community-based renewables are part of the mix but he’s no luddite. He gets the need — as should we all — for U.S. energy independence as transformational, not just economically but also as a matter of U.S. national security. Too much of the energy we still import comes from dangerously unstable regions of the globe. The more we produce here at home the less we must worry about the need to appease dictators and to avoid offending the enemies of our allies.

The construction of the Atlantic Coast Pipeline will lead to the creation of over 17,000 new jobs — and that’s without applying the multiplier effect in area communities for years to come. By some estimates it will lead to more than $2.7 billion in economic activity during construction and the capacity to generate $28 million annually in property tax revenue for local governments along the route, plus millions of dollars in savings for consumers and businesses on energy costs once in operation. Everybody wins.

Peter Roff is a senior fellow at Frontiers of Freedom and a former U.S. News and World Report contributing editor. Email him at RoffColumns@gmail.com. Follow him on Twitter @Peter Roff