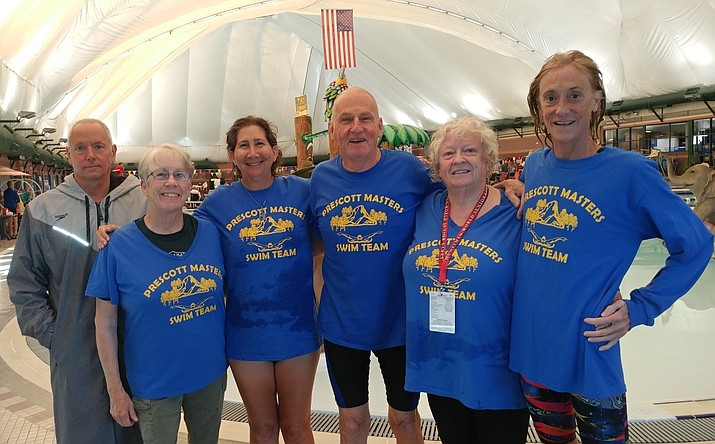 Members of the Prescott Masters swim team pose for a photo after an event at the Huntsman World Senior Games. (Courtesy)

ST. GEORGE, Utah — The Huntsman World Senior Games, is an event held in Utah each year for two weeks in October. The Huntsman games are for participants aged 50 years and over, and this year saw 11,000 athletes participate form all 50 states and 32 countries.

The Prescott Masters swim team had eight of its members attend the festivities. Ray Bellem (82), Annemarie Bellem (79), Marianne Erickson (66), Julie Joyce (66), Mark Modjeska (65), Janie Newman (63), Sandra Zerner (58) and Brigid Bunch (55) all participate and represented Prescott. It was a rather successful time for the swimmers as they were able to combine for a total of 39 medals, including, 23 gold, 9 silver and 7 bronze, over the course of 42 events.

Individually for the Prescott swimmers, Mark Modjeska swam incredibly well in the 200 m butterfly event in the 656-69 age group, and is now ranked No. 1 nationally in that event.

In addition, it was a record breaking couple of weeks for Bunch, who set records in a handful of events, including the 200m backstroke, 100 and 200 meter breaststroke and the 200 and 400m induvial medley events.

If you are interested in joining the Prescott Masters swim team, contact coach Brigid Bunch at brigidswims@yahoo.com.