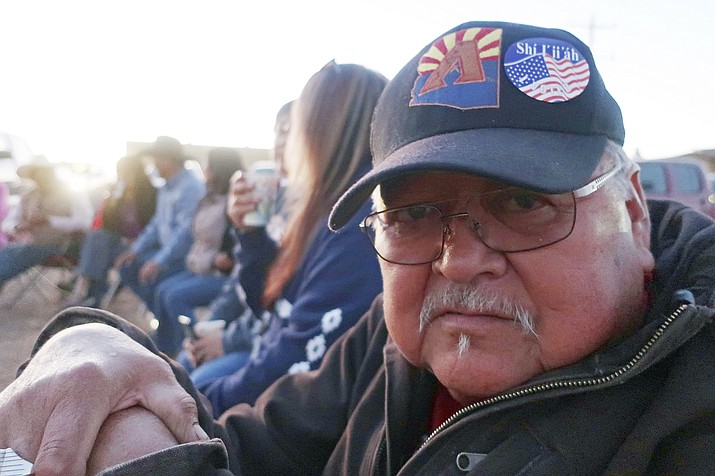 Jim Store, a voter on the Navajo Nation, in his hometown of Leupp on Nov. 6, 2018. The Navajo Nation has dropped a legal claim that could have delayed formal certification of the general election results. (Felicia Fonseca/AP, file)

PHOENIX ­— The Navajo Nation has dropped a legal claim that could have delayed formal certification of the general election results.

But the tribe still contends that early voting procedures used in three Arizona counties violate the rights of tribal residents. And attorney Patty Ferguson-Bohnee said Monday that unless there is a deal, they will be back in court.

At a brief hearing Monday, U.S. District Judge Dominic Lanza agreed to essentially put the legal dispute on the back burner, at least for now. In a blistering statement from the bench, however, the judge blasted the attorneys for the tribe for waiting until this past Tuesday to file suit and demanding an immediate court hearing on their request for a temporary restraining order on a narrow issue that would have delayed announcing a final vote tally for all races statewide.

“They dumped a poorly thought out TRO in the court’s lap right before Thanksgiving,’’ Lanza said, causing “unnecessary hardship’’ not only on the court but also on the attorneys for the state and the three counties. “That shouldn’t happen.’’

Lanza pointed out that many of the legal issues raised by the tribe are not new.

For example, the lawsuit complains of the lack of early voting sites on the reservation and the lack of people at these sites to provide instructions in the Dine language on how to properly fill out and sign the ballots. The situation is complicated because there are no written instructions as the Navajo language is strictly oral.

“The issues rose weeks, if not months, before the election,’’ Lanza said, and could have been dealt with at that time.

Ferguson-Bohnee said there was an issue that was not known until after the Nov. 6 election: the refusal of election officials to allow about 100 reservation residents who had not signed their early ballot envelopes the opportunity to go to county offices to fix the problem.

But Lanza was not impressed, pointing out that those ballots would have affected only one school board race in Apache County where the results were close.

Yet giving more time to “cure’’ just those ballots would have delayed formal certification of election results statewide set for this coming Monday. And absent that formal canvass, no one who was elected on Nov. 6 can take office. With the issue of those ballots now dropped, that still leaves what Ferguson-Bohnee claims are voting practices that effectively give fewer rights to reservation residents.

Key is the issue of early voting centers.

Most Arizonans request early ballots which are mailed to their homes. They can be filled out and mailed back or dropped off at early voting centers.

One problem, the tribe contends, is that there are no written instructions provided in the Dine language And the lawsuit says the counties provided no radio announcements or other communications in the Navajo language explaining the legal requirements. So a reservation resident who is unsure of how to fill out the ballot and requirements to sign the envelope needs to go to a voting center for help.

But here’s the thing: Navajo County, for example, had a voting center open from Oct. 10 through Nov. 2 at the county recorder’s office. But in Kayenta, the voting center there at the Bashas Shopping Center was open for just five hours on Oct. 19; there were only three other one-day, five-hour opportunities spread throughout the reservation which is the largest in the country.

“It can’t be that someone in Kayenta has 10 hours while someone in Holbook has the whole early voting period,’’ she said. “That’s not equal access.’’

Forcing reservation residents who need help to drive long distances -- it’s about three hours from Kayenta to Holbrook — also is not an answer, Ferguson-Bohnee said.

She told the judge that officials in Apache, Navajo and Coconino counties “have agreed to work with the Navajo Nation to resolve the voting problems.’’ But Ferguson-Bohnee said while the request for the restraining order has been dropped, the lawsuit remains alive to deal with issues that cannot be worked out.

Resolving the legal question of what to do with unsigned ballot envelopes raises another legal issue that could have statewide implications.

Counties do provide a period to “cure’’ ballots when a signature on the envelope does not match what is on file. Ferguson-Bohnee contends that same opportunity should be provided when someone returns a ballot in an unsigned envelope.

In his own court filing, Jason Moore, a deputy Navajo County attorney, said that can occur when there is time for a fix. But he said there is nothing in state law that provides a similar opportunity for those who simply did not sign the envelopes at all but do not return their ballots until Election Day.