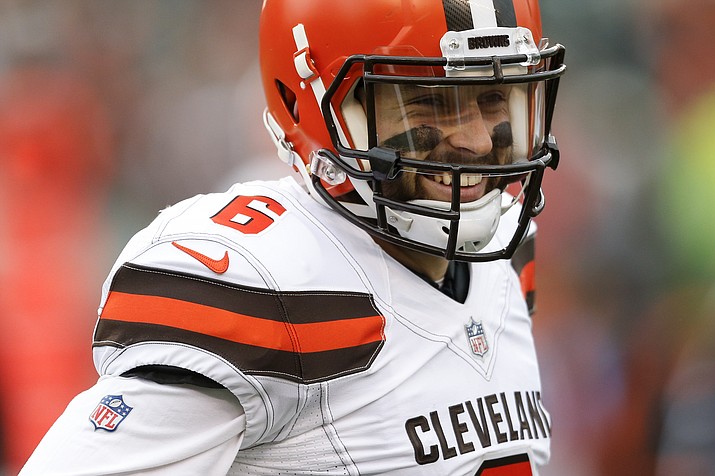 Cleveland Browns quarterback Baker Mayfield smiles in the second half of an NFL football game against the Cincinnati Bengals, Sunday, Nov. 25, 2018, in Cincinnati. (Gary Landers/AP)

CHARLOTTE, N.C. — Russell Wilson threw for 339 yards and two touchdowns and Sebastian Janikowski kicked a 31-yard field goal as time expired to lift the Seattle Seahawks to a 30-27 come-from-behind victory over the Carolina Panthers on Sunday.

After Graham Gano missed a 52-yard field goal with 1:40 left in the game that would have given the Panthers the lead, Wilson moved around in the pocket until finding Tyler Lockett downfield for a 43-yard completion, setting up the winning kick.

The victory puts Seattle (6-5) firmly in the hunt for a wild-card spot in the NFC, while the Panthers (6-5) are reeling after losing three straight and having their 10-game home winning streak snapped.

Lockett finished with five catches for 107 yards and a touchdown, while David Moore had four receptions for 103 yards and a score.

The Panthers spoiled a record-setting performance from Christian McCaffrey, who had a franchise-record 239 yards from scrimmage. He had 17 carries for 125 yards and 11 catches for 114 yards, becoming the first Carolina player to surpass 100 yards in both receiving and rushing in the same game.

Cam Newton finished 25 of 30 for 256 yards with two touchdown passes and one interception in the end zone. He ran for 63 yards on eight carries.

CINCINNATI (AP) — Baker Mayfield threw a career-high four touchdown passes in another growing-up-fast performance, and Cleveland ended one of the NFL's longest streaks of road futility with a victory over Cincinnati, which lost quarterback Andy Dalton to a thumb injury.

Cleveland (4-6-1) got its first road win since 2015, emphatically snapping a streak of 25 straight road losses that was one shy of the Lions' NFL record. The Browns also ended a run of seven straight losses to their intrastate rival.

And just as a Browns safety predicted, it wasn't even close.

The Browns surged ahead 28-0 as former head coach Hue Jackson watched helplessly from the opposite sideline. Jackson couldn't win with the Browns — only three wins in two-plus seasons. Nor could he couldn't beat them as a special defensive assistant with the Bengals (5-6), who lost for the fifth time in six games.

The defending Super Bowl champions trailed 12-0 early and were down 19-14 in the fourth quarter before Carson Wentz made key throws and undrafted rookie Josh Adams delivered big runs.

Adams scored on a 1-yard touchdown run and ran up the middle for the 2-point conversion to put Philadelphia ahead 22-19.

After the Giants tied it on Aldrick Rosas' third field goal, a 29-yarder, the Eagles controlled the ball for 5:27.

Coach Doug Pederson went for a fourth-and-1 at the Giants 42 and Wentz completed a 12-yard pass to Nelson Agholor right before the two-minute warning. Adams ran three times and Elliott made the go-ahead kick.

The Giants started at their 34 with 16 seconds left but couldn't do much.

The Eagles (5-6) stayed in the mix in a mediocre NFC East. The Cowboys and Redskins are tied for first place at 6-5. The Giants fell to 3-8.

Brady also reached 3,000 yards passing for the 16th straight season, tying Peyton Manning for second in NFL history behind Brett Favre's 18. The New England quarterback surpassed the mark early in the fourth quarter with a 17-yard completion to a diving Josh Gordon.

Brady had just one TD throw in his previous three games, but connected with Rob Gronkowski and Julian Edelman against the AFC East-rival Jets (3-8). Rookie Sony Michel ran for a season-best 133 yards and a TD, and the Patriots had 216 yards rushing to improve to 3-3 on the road this season.

BALTIMORE (AP) — Rookie quarterback Lamar Jackson ran for a touchdown and threw for a score, Terrell Suggs returned a fumble 43 yards for a TD and Baltimore ran past Oakland.

Cyrus Jones took a punt 70 yards for a touchdown to help the Ravens (6-5) win a second straight game for the first time since September.

Gus Edwards rushed for 118 yards as part of an effective ground game that enabled Jackson to pass just enough to keep the Raiders (2-9) off guard — and off the field. Baltimore expanded a three-point halftime lead to 27-17 with two run-heavy touchdown drives that consumed a total of nearly 16 minutes.

With starter Joe Flacco out for a second straight game with an injured right hip, Jackson cut down on his rushing attempts, threw more often and got the same result — a victory. After carrying 27 times for 117 yards last week in his NFL starting debut, Jackson ran 11 times for 71 yards and went 14 for 25 for 178 yards and two interceptions.

Suggs clinched it with 5:55 left, lumbering down the right sideline after Oakland's Derek Carr was sacked by Matthew Judon and lost the ball on a fourth-down play.

ORCHARD PARK, N.Y. (AP) — Josh Allen scored the go-ahead touchdown on a 14-yard run in the fourth quarter, and the Bills beat the Jaguars in a game marred by a fight that led to the ejections of Jacksonville running back Leonard Fournette and Buffalo defensive end Shaq Lawson.

Fournette scored twice to tie it at 14 in the second quarter. He finished with 95 yards on 18 carries before he was thrown out with 2:57 left in the third.

Allen also threw a 75-yard touchdown pass to Robert Foster in the rookie quarterback's first game since missing four with a sprained throwing elbow. Rookie receiver Isaiah McKenzie scored on a 6-yard run off a sweep, and Buffalo (4-7) came off its bye week off to win consecutive games for the first time this season.

The Jaguars (3-8) dropped their seventh consecutive game in their longest losing streak since a nine-game slide in 2016, which led directly to Gus Bradley being fired and replaced by current coach Doug Marrone.

Winston, benched last month after turning the ball over 11 times in 14 quarters, completed 29 of 38 passes without an interception.

The fourth-year pro, who's shared the starting job with Ryan Fitzpatrick, tossed scoring passes of 6 yards to Cameron Brate and 28 yards to Adam Humphries on a play he extended by scrambling to his right before throwing back toward the center of the field.

Tampa Bay (4-7), meanwhile, had four sacks and forced a turnover on defense for the first time in eight games, with Ryan Smith and Isaiah Johnson coming up with the team's first interceptions since a loss to Pittsburgh on Sept. 24.

The Broncos (5-6) used four takeaways to counter a 97-yard touchdown toss from Roethlisberger to JuJu Smith-Schuster.

Roethlisberger was 41 of 56 for 462 yards, but he was intercepted twice and the Steelers (7-3-1) lost two fumbles in losing for the first time since September.

Phillip Lindsay rushed for 110 yards and the game-deciding touchdown on just 14 carries for Denver, which also ended the Chargers' six-game winning streak last week and would have snapped Houston's five-game roll were it not for a missed field goal as time expired.

Miami (5-6) has lost 10 of its last 11 on the road, perhaps none more frustrating than this one. The Dolphins picked off Luck twice, recovered a fumble and partially blocked a punt on their way to a 24-14 lead.

It still wasn't enough to derail the resurgent Luck, who was 30 of 37 for 343 yards. He also had the first catch of his NFL career, a 4-yard reception on fourth-and-1 late in the first half. Luck capped that drive with a 1-yard TD pass to Jack Doyle.

Vinatieri kicked a 46-yard field goal with 8:26 to play. The Colts' defense then forced a three-and-out and Luck found Eric Ebron for a 12-yard touchdown pass, tying it at 24 with 4:25 left.

After a personal foul on Xavien Howard following the score and a holding penalty on the ensuing kickoff, Miami went three-and-out again and Luck burned the final 2:38 to set up Vinatieri's winner.

Ebron finished with five receptions for 45 yards and two scores.

Miami quarterback Ryan Tannehill was 17 of 25 for 204 yards and two TDs. He ended a nine-quarter touchdown drought with a 33-yard pass to Drake on Miami's opening series.