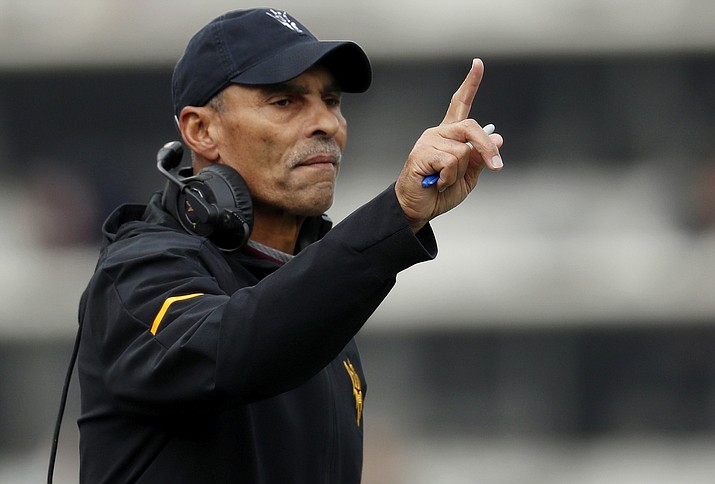 In this Saturday, Oct. 6, 2018, file photo, Arizona State head coach Herm Edwards gestures during the first half of an NCAA college football game in Boulder, Colo. Arizona State's first season under coach Herm Edwards has been a solid one. The Sun Devils beat some good teams, lost some close games and are bowl eligible. (David Zalubowski/AP, File)

TUCSON — Arizona State's first season under coach Herm Edwards has been a solid one. The Sun Devils beat some good teams, lost some close games and are bowl eligible.

Arizona has had a similar first season under Kevin Sumlin, except for bowl eligibility.

The Wildcats need a win on Saturday to become bowl eligible, adding a level of intensity in an already-heated rivalry.

Arizona would like a postseason spot at the expense of Arizona State. The Sun Devils would love to prevent the Wildcats from getting it by winning in Tucson and retaining the Territorial Cup.

Arizona head coach Kevin Sumlin walks on the sideline during the first half of a Nov. 17, 2018, NCAA college football game against Washington State in Pullman, Wash. "We've got a lot to play for still," Sumlin said. "It's a rivalry game. It's the Territorial Cup. A chance for the postseason. There really shouldn't be anything I've got to say to get guys to go." (Young Kwak/AP, File)

"We're going to approach it the same, but deep down everyone knows it's a rivalry game," Sumlin said.

Arizona failed to become bowl eligible with last week's lopsided loss to No. 7 Washington State and gets another, final chance this weekend against its biggest rival.

Arizona State (6-5, 4-4) clinched bowl eligibility by beating UCLA 31-28 on Nov. 10. That put the Sun Devils in control of their own destiny in the Pac-12 South: Win out and represent the South in the Pac-12 Championship.

Arizona State fell short, losing to Oregon last week while No. 18 Utah beat Colorado to clinch the South. Now the Sun Devils can improve their bowl standing while preventing their rivals from playing in the postseason.

"I think all bowl games are important, but all of the sudden you might get slated in another bowl game because of the record so those things are involved," Edwards said. "You want to win a football game, that's important. We put too much work into this to not try to win a game."

A few more things to look for when Arizona hosts Arizona State on Saturday night:

THE SERIES: The Territorial Cup is recognized by the NCAA as the oldest rivalry trophy game, dating to 1899. Arizona leads the all-time series 49-41-1, but Arizona State won last year's game 42-30 in Tempe. The home team has won five straight in the Territorial Cup.

TAYLOR RUNNING: Arizona RB J.J. Taylor enters Saturday's game sixth nationally with 1,290 yards rushing and needs 122 yards to pass Khalil Tate for fourth on Arizona's season list. He has 227 carries, 12 behind David Adams for seventh in school history, and needs 137 yards to become the fifth Arizona player to have 2,000 all-purpose yards in a season.

NUMBERS: No Arizona State running back has fumbled in 854 straight carries, a streak of 30 straight games dating to 2016. ... Arizona LB Colin Schooler is tied for second nationally with 21.5 tackles for loss. ... Arizona WR N'Keal Harry has at least one reception in all 36 games he's played for the Wildcats. ... Arizona WR Shawn Poindexter's last six receptions have resulted in a TD, the longest stretch by a Pac-10/12 player since at least 2007.