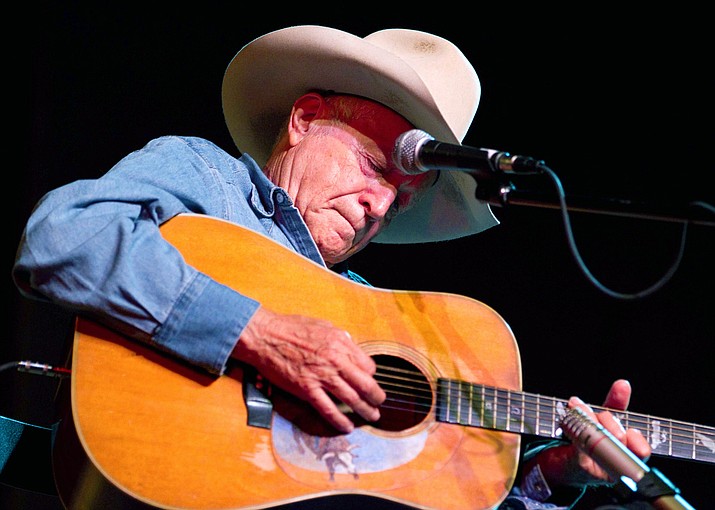 Bob Dylan called him the “king of the folksingers,” Johnny Cash called him “my good buddy” — he’s Ramblin’ Jack Elliott and he’s returning for a concert this weekend.

His Saturday, Nov. 24 show at Prescott Center for the Arts, 208 N. Marina St., will also include Elliott’s close friend and Prescott cowboy poet Gail Steiger along with Jett Montana.

With more than 40 albums, multiple Grammy Awards and a National Medal of the Arts, Elliott is considered one of the United States’ legendary foundations of folk music. The seeds of his musical career were planted when seeing Gene Autry as the singing star at the Madison Square Garden Rodeo while a child, Elliott said. However, an encounter with a cowboy leaning up against the building the following year made him realize that Autry was the Hollywood version of a cowboy, he said.

After that, he became more interested in genuine cowboys and started reading books by Will James, Elliott said. James became more of a hero to him than Autry or Roy Rogers, so he began to seek out cowboys, he said. At the age of 15, he ran away from home and got a job grooming horses on a traveling rodeo where he met his first inspiration to pick up the guitar: a rodeo clown and singing cowboy named Brahmer Rogers who played the banjo and guitar, Elliott said.

“When I got home from that rodeo trip, I found an old guitar and started practicing about five hours a day,” he said. “Got to be medium good on the guitar in about six months and found some other guitar players and started jamming and playing music.”

With such a storied career, Elliott said he continues to enjoy playing and likes singing plain, old, simple songs such as “Red River Valley” and Woody Guthrie’s “Talking Sailor.” One song he really likes is “The Sierry Petes (Or Tyin’ Knots in the Devil’s Tail” by Gail Gardner, he said.

For the songs he writes, Elliott said he gets his inspiration from every cowboy and old sailor that he’s met, chewed the fat with and picked the guitar with. He’s tried to absorb what they were telling him and he tries to say it the way they said, he said.

Soul of a Man - Ramblin' Jack by T.A. Sedlak