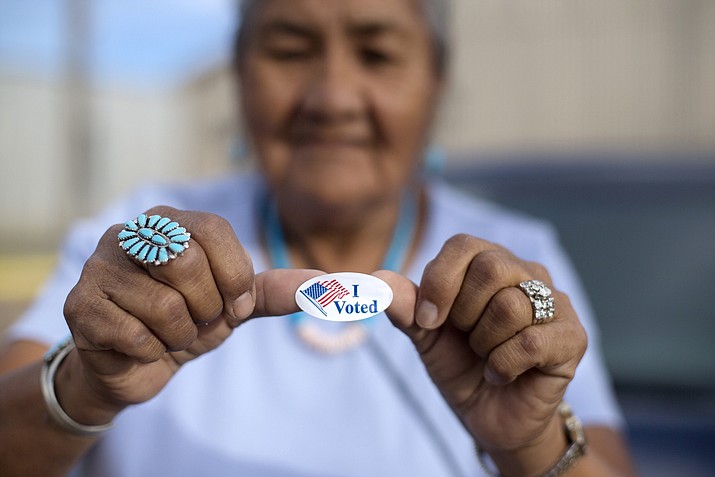 Mildred James of Sanders, Ariz., shows off her “I Voted” sticker Aug. 28, 2018, as she waits for results of the Navajo Nation presidential primary election to be revealed in Window Rock, Ariz. (Cayla Nimmo/AP, File)

PHOENIX — The Navajo Nation is claiming that the state and several counties illegally discriminated against tribal members and kept them from having their votes counted.

Legal papers filed Tuesday in federal court cite a litany of problems that lawyers for the tribe say make it difficult, if not impossible, for reservation members to cast early ballots. That includes the failure to provide instructions in the native language on how to fill them out as well as the requirement to sign and date the envelope.

But the lawsuit says the problem was complicated this year by the fact that some counties refused to give residents time after the election to “cure’’ early ballots where the envelope was not signed or a signature did not match.

In pure numbers, that issue is highly unlikely to affect any of the races for statewide or legislative offices. Attorney Patty Ferguson-Bohnee said there are more than 100 ballots that were not counted.

But the lawsuit does not simply ask Judge Dominic Lanza to declare the voting practices illegal and prohibit them from occurring again. It also seeks a court order giving those whose ballots were not counted five days to remedy the problem.

More to the point, that five days would run from whatever date the judge would issue an order from whenever that order is issued. And there is no date at this point for even a hearing.

That, in turn, could prevent the state from certifying the election results as scheduled on Dec. 3.

Central to the legal fight is that Arizona allows people to vote early. They can cast ballots by mail or drop them off ahead of time at early voting sites.

According to the lawsuit, the Navajo Nation requested Coconino, Apache and Navajo counties, the three counties within its borders, to establish additional voter registration and early voting sites on the reservation to assist tribal members.

“For various and unsubstantiated reasons, the counties denied the nation’s request,’’ the legal papers say.

“The inadequate voting sites resulted in tribal members making mistakes on their ballots,’’ the claim continues. “Workers at an early voting site could have identified and corrected the signature issue.’’

Complicating matters, the lawsuit states, is that ballot translations in the Navajo language are only provided orally, as are instructions on how to complete an early ballot.

But that was no help for those who received early ballots by mail.

A settlement of the lawsuit filed by the Arizona Republican Party directed each county to allow residents to correct ballot deficiencies after Election Day.

But that deal said each county could use the same procedures that had been in place before Election Day, rather than require a uniform procedure statewide. And the lawsuit says the practices of counties on the reservation which limit “curing’’ opportunities means citizens of the Navajo Nation have less opportunity to participate in the political process and elect candidates of their choice.

“The state has no legitimate interest in enforcing an agreement between political parties that allows early voters to correct some deficiencies and not others,’’ Ferguson-Bohnee wrote.

The Apache County Recorder’s Office declined to comment on the lawsuit; messages left for the recorders in Coconino and Navajo counties were not immediately returned.