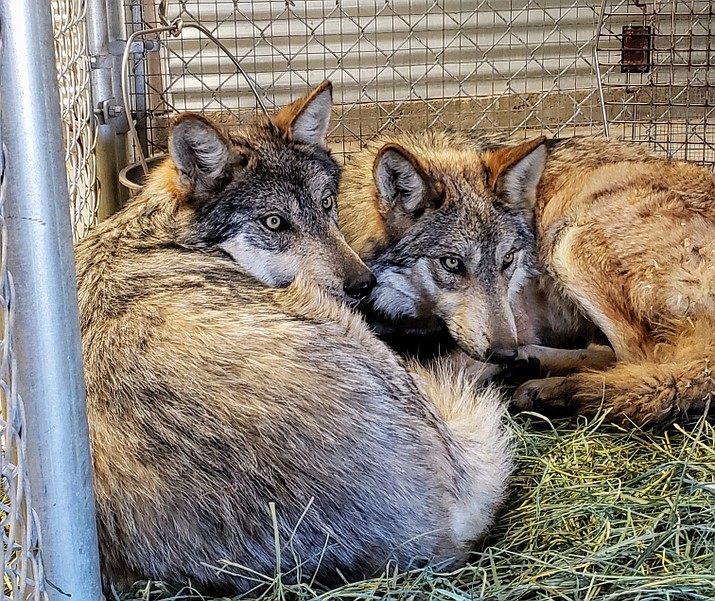 The young Mexican gray wolves that arrived at Heritage Park Zoo on Nov. 14 were photographed before they were released into their pen on the zoo grounds. The 1½-year-old siblings are mostly full-grown, although they are expected to bulk up somewhat as they get older. (Courtesy/Heritage Park Zoo)

And so far, the three — young Mexican gray wolves from the California Wolf Center in Julian, California — have opted to stay mostly to themselves. 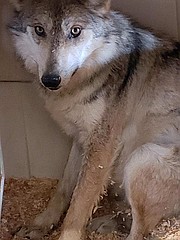 The young Mexican gray wolves that arrived at Heritage Park Zoo on Nov. 14 were photographed before they were released into their pen on the zoo grounds. (Courtesy/Heritage Park Zoo)

The new arrivals at the Heritage Park Zoo in northeast Prescott joined the 200 or so other animals at the zoo about a week ago.

A visit to the one-third-acre fenced parcel on which the wolves are kept is not likely to yield a close-up view, however; they have plenty of scrubby shrubs and trees to hide in.

Along with the sounds of traffic from Willow Creek Road, the three young wolves are also getting accustomed to the crowds of children and adults who regularly visit the zoo. In addition, McLaren said, “They’re smelling a whole new environment.”

She explained that the three wolves — sisters about 1½ years old — were born in captivity at the California center, as a part of the Species Survival Program (SSP).

A news release from the Heritage Park Zoological Sanctuary states: “Decisions for transfers and breeding of Mexican Gray Wolves is the responsibility of the Mexican Gray Wolf Species Survival Program,” an organization that oversees the strategic planning of captive species often classified as threatened or endangered.

Accommodation of the three new additions required the transfer of the zoo’s 13-year-old wolf, Catori, to a location in Scottsdale, where she will be retired in a warmer climate.

McLaren says the Heritage Park Zoo, which is a rescue sanctuary, serves as a foster program of sorts for animals such as the three Mexican gray wolves.

For the zoo, the importance of the Mexican gray wolves is the conservation aspect, McLaren said, adding, “We want to do our part.”

Currently, the three young wolves are known by numbers only, and do not have names. McLaren said the zoo likely will opt to name them in the future, or ask for help from the community.

Raquel Gardner, the zoo’s deputy director, said the dynamics of the three young wolves are already apparent. “One is very much the pack leader, the alpha,” she said. “The other two are shyer.” All three “have beautiful coats,” she said, and are “a really nice addition” to the zoo.

McLaren said the length of the wolves’ stay at the Prescott zoo will be up to the Species Survival Program. But, she said, “We hope it’s for a long time.”

The wolves’ future is not determined at this point. McLaren said they could be released into the wild at some point. “We will treat it as if that’s a possibility,” she added. For instance, the wolves’ food is made from wild meats such as deer or elk, not beef.

The three wolves also could be used for breeding in the future. “If they are genetically valuable, they may be selected to be paired up with a male,” McLaren said, noting that the Heritage Park Zoo currently is not equipped to handle breeding.

This week, the zoo was operating on a “business as usual” basis, despite the Monday night fire that caused about $10,000 in damage and caused the death of one wallaby and the serious injury of another.

The arrival of the three new wolves coincides approximately with the start of the zoo’s popular WildLights & Animal Sights event that is scheduled to open this weekend.