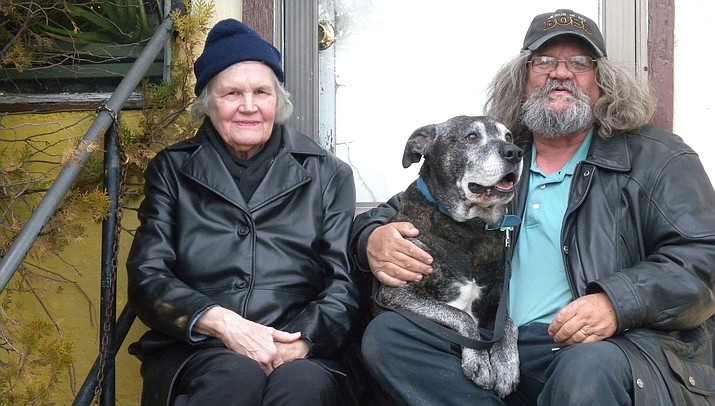 Daniel Mattson with his wife, Grace, and their dog, Duke, at their now home in downtown Prescott. The couple rented the home for 10 years before purchasing it through the assistance of more than 100 community donors who enabled them to secure a mortage for the property. (Courtesy)

Prescott homeless advocate Daniel Mattson was delighted this week to announce that the day before Thanksgiving, his 15th wedding anniversary, he and his wife, Grace, became owners of the home they have rented since they first moved to the city a decade ago.

The closing on the house in downtown Prescott was a life-affirming gift to a couple who two months ago feared they might be forced to leave their adopted community. Their landlord was selling the property and they didn’t have enough savings to afford to finance a mortgage. Nor could they afford another rental.

Not exactly certain where to turn, Mattson found help from the very community he pledged to support when he moved to town. His hands-on advocacy was touted in a GoFundMe page that ended up garnering more than $26,000 to help Mattson cover a down payment, repairs and closing costs associated with the $125,000 home purchase. Before that, Mattson was given $5,000 so as to secure the offer.

All told, Mattson received 134 individual donations. Mattson, too, offered a special thanks to Kathy Morrow at CNN Mortgage and Penny at Empire West Title.

“I want to thank everybody who helped make this possible,” said a grateful and relieved Mattson of obtaining the finances he needed to make the deal become a reality.

Just before the closing on Wednesday, Mattson told his GoFundMe donors the good news.

Mattson is touted for his outreach to those who aren’t always the easiest to help.

All hours of the day and night, Mattson considers himself on call for anyone who needs a ride to crisis intervention or just to talk over a cup of coffee. His yard is where he stores equipment for a downtown hunger ministry. He champions the cause of the disenfranchised to local leaders, be they attached to a local nonprofit organization or serving in elected office. Mattson volunteers for various city committees and organizations, and may consider running for elected office sometime in the future.

A few days before the Wednesday closing, Mattson shared the good news with his GoFundMe donors.

“WE HAVE ENOUGH!” Mattson wrote. “Thank you all for pitching in in our time of need, and changing what could have been a catastrophe into a blessing.”

Coalition for Compassion and Justice Executive Director Jessi Hans said she is delighted Mattson can continue his calling in the Prescott community.

She said she was confident he would garner a lot of support, but whether it would be enough to meet his financial needs remained something of a question.

“This is a wonderful anniversary gift — and Thanksgiving,” Mattson said. “I’m so glad I don’t have to leave, and can have a base of operations so I can continue to help people in the Prescott area.”

‘Angel’ to those in need calling on community to help him keep his home
Prescott homeless advocate closer to goal of buying home
Williams: Who is Hans Vang and what does he do?
A movement to end homelessness in Prescott
Open house marks 1st anniversary of CCJ shelter, justice center
Event Calendar