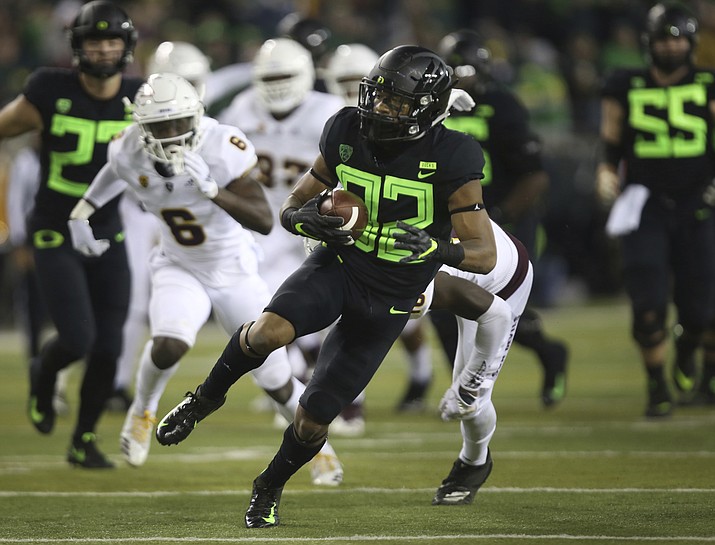 EUGENE, Ore. — The Oregon Ducks made what might be quarterback Justin Herbert's final game at Autzen Stadium more of a cliffhanger than they would've liked.

Herbert threw for 262 yards and two touchdowns and Oregon held off a late rally by Arizona State to win 31-29 and knock the Sun Devils out of contention for a spot in the Pac-12 championship game.

Herbert has not said whether he will return for his final year of eligibility for the Ducks. He was asked after the game for his takeaway on how he played against the Sun Devils.

"Fortunately it doesn't fall just on my shoulders. The defense played really well," he said. "I know the feeling all too well of going against these guys every day and they played big-time football. Sometimes you have to rely on your defense and they did a great job."

Dillon Mitchell, Herbert's his favorite target this year, caught four passes for 103 yards and a touchdown against the Sun Devils.

Arizona State (6-5, 4-4 Pac-12) headed to Eugene on a three-game winning streak and needing a win to stay alive in its division race. But Utah defeated Colorado 30-7 in Boulder earlier in the day, giving the No. 19 Utes six wins in conference play. The Sun Devils' loss meant they could not catch Utah with just one game to go.

The Ducks (7-4, 4-4) were also bowl-eligible but had stumbled with three losses in their previous four games. Saturday's game was Oregon's last at home this season before hitting the road for the Civil War against Oregon State on Thanksgiving weekend.

Oregon was already eliminated from the Pac-12 North title race, which will be decided by next weekend's Apple Cup between No. 17 Washington and No. 8 Washington State. But the victory over ASU assured the Ducks would finish above .500 in coach Mario Cristobal's first year.

Manny Wilkins threw for 182 yards and two touchdowns for ASU. N'Keal Harry had seven catches for 105 yards. And Eno Benjamin, the Pac-12's leading rusher, had 29 carries for 149 yards.

Up next for the Sun Devils is the rivalry game against Arizona.

"This team didn't end on a down note, we ended the game fighting our butts off, and that's what matters," Wilkins said. "We've got a big one coming up this week and our guys are going to be ready. We're going to be dialed up and ready to go, simple as that."

After Oregon built a 28-12 lead at halftime, the Sun Devils made it interesting with 11 minutes left when Brandon Aiyuk caught a 25-yard scoring pass from Wilkins to close within 28-23. Oregon answered with Adam Stack's 28-yard field goal.

The Sun Devils scored again on Wilkins' 1-yard touchdown run with 4:35 left, but the two-point conversion failed and Oregon remained in front.

Herbert was intercepted on a tipped pass by ASU's Cam Phillips, but on the ensuing drive Oregon recovered a Sun Devil fumble to get the ball back with just over three minutes to go.

"I think we got rolling pretty good, and we had a couple a couple of times when we didn't get the ball rolling and I think we started pressing, I think you could see that in our players. We dropped some balls and we made some critical errors that ended up being turnovers," Cristobal said.

CJ Verdell ran for the opening Oregon touchdown and also caught an 18-year scoring pass from Herbert, who also found Mitchell with a 57-yard scoring pass in the first half. Jaylon Redd scored on an 8-yard run.

Brandon Ruiz kicked field goals from 38, 30 and 29 yards for the Sun Devils, while Wilkins had a 22-yard touchdown pass to Frank Darby.

Arizona State: The Sun Devils were without freshman linebacker Merlin Robertson for the first half after he was flagged for targeting in the third quarter of last weekend's game. Robertson has 66 tackles, five sacks, an interception and a recovered fumble this season. ... Safeties Jalen Harvey and Demonte King did not play because of injuries. ... The Sun Devils are coming off a 31-28 victory over UCLA.

Oregon: There were questions earlier in the week whether CJ Verdell would be able to play because of a neck injury. ... The Ducks are coming off a 32-25 loss at Utah last Saturday. ... Herbert is widely considered to be among the top quarterbacks in next year's NFL draft should he choose to leave early.

Arizona State: The Sun Devils end the season at rival Arizona in the Territorial Cup on Saturday.