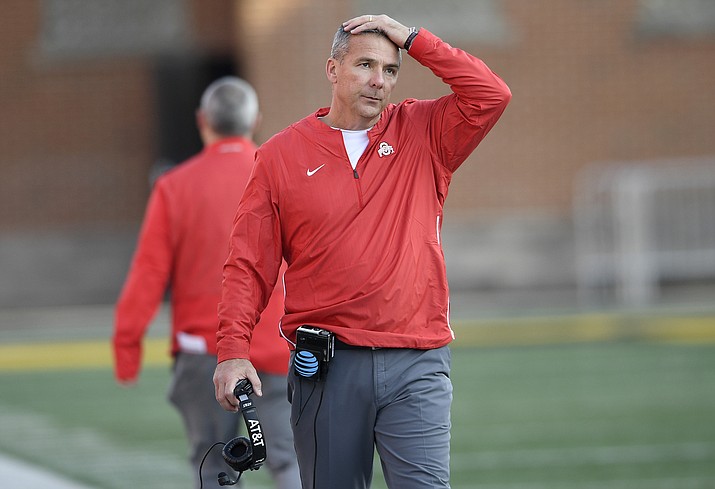 Ohio State head coach Urban Meyer looks on during a break in the second half of an NCAA football game against Maryland, Saturday, Nov. 17, 2018, in College Park, Md. Ohio State won 52-51 in overtime. (Nick Wass/AP)

COLLEGE PARK, Md. — Ohio State went to overtime to avoid one of the most stunning upsets of the season, beating Maryland 52-51 on Saturday when the Terrapins failed to convert a 2-point conversion after matching the Buckeyes’ touchdown in the first extra period.

After a 5-yard touchdown run by Dwayne Haskins gave the Buckeyes the lead to start overtime, Tayon Fleet-Davis scored to get the Terrapins within a point. Interim coach Matt Canada decided to end it right there, going for 2, but Tyrrell Pigrome’s pass to Jeshaun Jones was off target.

The Buckeyes stayed in the hunt for the Big Ten title and a spot in the College Football Playoff.They finish the regular season next week in a game against Michigan that will decide the Big Ten East winner.

The Buckeyes never led until overtime against the upstart Terrapins (5-6, 3-5). Haskins ran for three touchdowns and was 28 for 38 for 405 yards and three TDs.

Ohio State finished with a whopping 688 yards, including 203 on the ground by J.K. Dobbins, but the defense allowed 535 yards and seven touchdowns.

Maryland freshman Anthony McFarland had touchdown runs of 81 and 75 yards in the first quarter and finished with 298 yards rushing — seven short of the school record.

TUSCALOOSA, Ala. (AP) — Tua Tagovailoa passed for 340 yards and three touchdowns, but Alabama struggled for 30-plus minutes before putting away The Citadel.

The Crimson Tide (11-0) went into halftime tied at 10 with the FCS Bulldogs (4-6). Alabama scored two touchdowns in a 12-second span on its way to a 27-point third quarter.

NEW YORK (AP) — Ian Book returned to the starting lineup for Notre Dame and threw for 292 yards and two touchdowns to help the Fighting Irish stay on target for a trip to the College Football Playoff.

The Fighting Irish held out Book from last week’s home game against Florida State with a rib injury, and he wasn’t missed as Notre Dame (11-0, No. 3 CFP) rolled with Brandon Wimbush at quarterback.

Notre Dame clearly wanted to be cautious with Book ahead of its trip to Yankee Stadium to face high-scoring Syracuse (8-3, No. 12 CFP). The junior quarterback, who took over as the starter four games into the season, looked as good as new.

The Wolverines (10-1, 8-0 Big Ten, No. 4 CFP) looked sluggish and it may have had something to do with looking ahead to next week’s game at No. 9 Ohio State, where they need a win to reach the Big Ten championship game for the first time.

The Hoosiers (5-6, 2-6) were competitive against Michigan as they have been lately, losing in overtime twice in the previous three meetings, but came up short again.

Indiana led 17-15 at halftime and finished with more yards (385) than anyone has had against Michigan’s top-ranked defense this season.

Another freshman, James Cook ran for 76 yards on only three carries, including his first two career scoring runs, from 26 and 27 yards.

Georgia gained 701 yards, including 426 yards on the ground, and never punted. Fields led the Bulldogs with 100 yards rushing, including a career-long run of 47 yards and a 3-yard scoring run. He completed 5 of 8 passes for 121 yards and two touchdowns.

Georgia (10-1) leaned on its quick-strike offense on six scoring drives lasting no more than four plays.

Starter Jake Fromm and Fields shared time at quarterback as the Bulldogs avoided looking ahead to next week’s state rivalry game against Georgia Tech or the Dec. 1 Southeastern Conference championship game against No. 1 Alabama. The Bulldogs led UMass (4-8) 42-13 at halftime.

The loss all but ended West Virginia’s shot at the College Football Playoff. West Virginia faces Oklahoma next Friday and still has a shot at reaching the Big 12 title game.

FORT COLLINS, Colo. (AP) — Collin Hill’s apparent 34-yard touchdown pass to Preston Williams with no time left was negated by penalty, giving Utah State the victory in a wild and stunning finish to a game played in snow and freezing rain. Colorado State was flagged for illegal touching after it was determined Williams had stepped out of bounds and was the first to touch the ball when he came back in bounds and made the leaping catch between two defenders in the end zone.

GAINESVILLE, Fla. (AP) — Feleipe Franks passed for 274 yards and three touchdowns — all in the first half — and Florida ran up 600 total yards.

Florida (8-3) rolled to a 49-0 lead at halftime. Gators defensive back Chauncey Gardner-Johnson returned an interception 26 yards for a touchdown on the first play to start the onslaught.

Four other touchdown drives took less than two minutes and the longest of the seven first-half scores came in 2:24.

McSorley won for the 30th time as a starter, making him the winningest quarterback in school history. The senior broke a tie with Todd Blackledge (1980-82) and Tony Sacca (1988-91).

The two touchdowns increased his total — running and passing — to 101.

The victory by the Huskies (8-3, 6-2 Pac-12) sets up a winner-take-all matchup with No. 8 Washington State in the Apple Cup next Friday for the Pac-12 North Division title.

The winner of the 111th matchup will play in the conference title game with a Rose Bowl berth at stake.

The Huskies dominated Oregon State (2-9, 1-7) early then coasted the final three quarters. After getting a week off, Washington jumped to a 28-3 lead on the strength of two short TD runs by Salvon Ahmed and a pair touchdown passes by Browning.

He hit Aaron Fuller with a 17-yarder after Oregon State fumbled a kickoff, and connected with tight end Cade Otton on a 21-yard TD strike.

A facemask penalty helped the Blue Raiders (7-4) reach the Kentucky 5 in the final minute, but consecutive sacks of Stockstill by Allen and Jamar Watson ended that final chance.

The Utes (8-3, 6-3) will win the Pac-12 South if Arizona State loses at Oregon later Saturday or if the Sun Devils fall to Arizona next week.

A sixth consecutive loss for the Buffaloes (5-6, 2-6) capped a week in which athletic director Rick George said he hadn’t made any decisions regarding coach Mike MacIntyre’s employment amid a news report that his job was in jeopardy.

Francois was 19 of 39 for 322 yards, shaking off two first-half interceptions for his fourth 300-yard game of the season. Cam Akers had 19 carries for 110 yards for the Seminoles (5-6, 3-5 Atlantic Coast Conference). It was Florida State’s first victory in six attempts against Top 25 teams this season.

Clayton Thorson completed 15 of 21 passes for 230 yards without a turnover and had a 13-yard touchdown run in the first half for the Wildcats (7-4, 7-1 Big Ten, No. 22 CFP). They pushed their school-record road winning streak to eight and have their best conference record since 1996.

Nate Hall had two interceptions for the Wildcats. Minnesota 5-6, 2-6), who fell to 4-13 in conference play under coach P.J. Fleck.

In his final home game, Fitzgerald completed 9 of 14 passes for 127 yards and also ran for 85 yards, including a 2-yard touchdown.

Senior Aeris Williams, who was starting in place of the injured Kylin Hill, added 104 yards rushing on 15 carries.