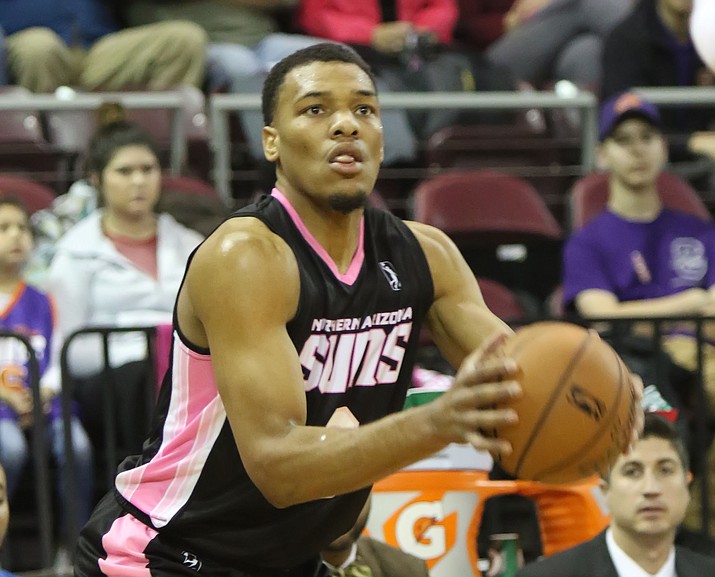 Northern Arizona’s George King (8) gets ready to shoot a 3-pointer during the first half against the Agua Caliente Clippers on Friday, Nov. 16, 2018, in Prescott Valley. King hit the game-winning 3-pointer as time expired to give the Suns a 120-117 win. (Matt Hinshaw/NAZ Suns)

PRESCOTT VALLEY — George King hadn’t hit a game-winning shot in his basketball career until Friday, Nov. 16, and this was one to remember for the Northern Arizona Suns.

NAZ snapped a three-game losing streak on the rookie forward’s 3-pointer from the left corner as time expired to beat the Agua Caliente Clippers, 120-117, in an NBA G League showdown at Prescott Valley Event Center.

Tied at 117-117 with 1.3 seconds left in regulation after a Suns timeout, King created space between himself and Clippers forward Jamel Artis, grabbed the inbounds pass from point guard Elie Okobo and calmly sank the trey.

The shot bounced off the rim and straight up in the air before dropping through the net as the crowd roared.

“I just shot the ball – I knew we had 1 second – and it went in, thank God,” King said in the locker room afterward as his teammates gave him a good-natured ribbing. “I’ve had two game-tying [shots] – one in seventh grade and one in college [University of Colorado] – and this is my first game-winner.”

Said Okobo about the inbounds play, “There was two other options before [getting the ball to King], but George got open really easy, so I gave him the ball and I know he’s a shooter. George is really confident about the way he plays and the way he shoots the ball. I knew it would go in.”

“It was a heck of a shot, obviously. I’m proud of Northern Arizona – they’re a good team,” Agua Caliente first-year coach Brian Adams said. “We’re both in similar situations where we’re just developing, chipping away.”

First-year Northern Arizona coach Bret Burchard, all smiles after the game, nabbed his first home win of the 2018-19 campaign on the Suns’ third try.

The Suns improved their record to 2-4, while the Clippers dipped to 1-4.

“I wanted it for our guys,” said Burchard of the Suns’ first victory since Nov. 6 at Iowa. “They’ve been working hard; they’ve been getting better. We’ve played some really tough teams, and I wanted them to get the little bit of encouragement and just see the fruits of their work.”

Three other Suns scored in double figures, including Jawun Evans, an L.A. Clipper during his rookie season in 2017-18 who was claimed off waivers Nov. 4. Evans had 17 points (8 for 10 field goals), three steals and four assists. Daniel Dixon (16 points on 7 of 8 shooting, three assists) and Derek Cooke Jr. (10 points, 14 rebounds, two assists) aided in the effort.

All five of Agua Caliente’s starters scored in double figures, led by forward Johnathan Motley’s 29 points and 15 rebounds. The Suns were outrebounded, 47-40, but they pulled through down the stretch. NAZ shot 54 percent from the field (48 of 89), including 14 of 29 (48 percent) from 3-point range. They were 10 of 14 from the charity stripe.

“We’ve been trying to kind of get over the hump. These last few games we’ve been in it, but we couldn’t finish,” Cooke Jr. said. “So, to be able to finish this game is exactly what this team needed to be able to boost that momentum to get our season going forward, to boost guys’ confidence and see that we can win at home.”

The Suns battle the Santa Cruz Warriors for the third time in 15 days at 6 p.m. Sunday, Nov. 18, in Santa Cruz Beach.

Santa Cruz (6-0) won the first two meetings over the Suns in Prescott Valley.