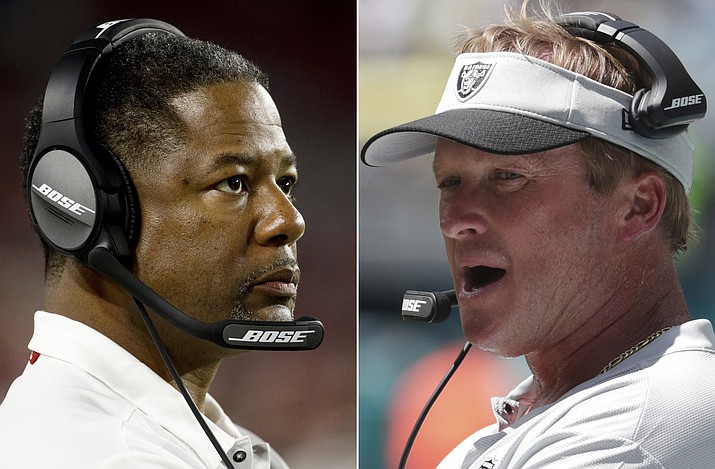 At left, in an Aug. 30, 2018, file photo, Arizona Cardinals head coach Steve Wilks watches during the first half of a preseason NFL football game against the Denver Bronco's, in Glendale, Ariz. At right, in a Sept. 23, 2018, file photo, Oakland Raiders head coach Jon Gruden walks the sideline during the first half of an NFL football game against the Miami Dolphins, in Miami Gardens, Fla. The Raiders, with the NFL’s worst record at 1-8, drag a five-game losing streak into their game with the Arizona Cardinals, who at 2-7 are tied for the third-worst record in the league. (AP/File)

GLENDALE — It's not exactly a clash of titans at State Farm Stadium on Sunday.

The Oakland Raiders, with the NFL's worst record at 1-8, drag a five-game losing streak into their game with the Arizona Cardinals, who at 2-7 are tied for the third-worst record in the league.

Both teams look at this as a game they realistically can win, while a loss will make a bad season much uglier.

It's a matchup of first-year coaches with Jon Gruden in Oakland and Steve Wilks in Arizona. It has been a bumpy ride for both.

"They're going to be ready. This is the National Football League, and I told the guys this morning that you can throw the record out the window," Wilks said. "These guys are coming here to win a football game. They're down. They need a win just like we need one. So, we better make sure that we're prepared and ready to play."

Gruden knows there are those who believe his team is "tanking" to get a high pick in next year's draft.

"If you pay attention to that stuff, anybody that says that, I don't agree with, but I can't control what's out there," he said. "We've had to make some tough decisions, and everybody's going to have their own opinion, but I know what the reality is. I know what the truth is, and we're doing everything that we feel like is in the best interest of the Raiders, not only for this year, but for the future.

"When you're the head coach, you're going to take criticism, and that's just the way it is."

Arizona's offense showed some life after Wilks fired offensive coordinator Mike McCoy and elevated Byron Leftwich to the job. In last week's loss to the Chiefs, Arizona running back David Johnson had a season-best 183 yards from scrimmage, 98 rushing and 85 receiving. He scored both Cardinals touchdowns.

Here are some things to consider when the Raiders come to the desert:

Arizona's Larry Fitzgerald is closing in on yet another milestone. He needs eight receptions to break Jerry Rice's NFL record for the most catches with one team. Fitzgerald has played all 15 of his seasons with the Cardinals.

In last week's loss against Kansas City, he moved past Terrell Owens into second on the NFL's career list for yards receiving.

The Raiders traded No. 1 receiver Amari Cooper last month and then lost two more receivers to injuries last week. Martavis Bryant will be out for at least a few weeks with an injured knee and Jordy Nelson is questionable this week with a knee injury.

Rookie Marcell Ateman, who has been on the practice squad or inactive all year, will get a chance alongside Brandon LaFell and Seth Roberts. Ateman showed flashes during training camp and hopes that translates this week.

"I didn't take a back seat when I got on the practice squad," he said. "I kept working so that when I get my opportunity I'm better."

Rosen took the physical punishment in stride, something that impressed Gruden.

"He's showing a lot of mental and physical toughness," the Oakland coach said. "He has got a great arm, and he's got a huge upside, I believe."

Derek Carr has gone four straight games without throwing an interception for the first time in his five-year career. The problem is that while Carr has avoided the catastrophic mistakes, the big plays have been missing as well.

Carr is averaging just 6.8 yards per attempt in that span, down from 8.1 his first five games when he had eight INTs. His sack rate has also more than doubled over the past four games.

"We had some turnovers and things like that," Carr said about taking more shots downfield earlier in the season. "Turning the ball over is worse for our team than me checking the ball down if it's not completely open."

Oakland traded down with Arizona on draft day, dropping five spots to No. 15 and gaining a third-round pick in the process. The Cardinals took Rosen, while the Raiders got the left tackle they wanted in Kolton Miller and used the third-round pick to acquire Bryant.

Miller has played much of the season on an injured knee and has allowed the most sacks (10) and second-most pressures (39) of any lineman in the league.

"I think he's really learning a lot about this business the hard way," Gruden said.