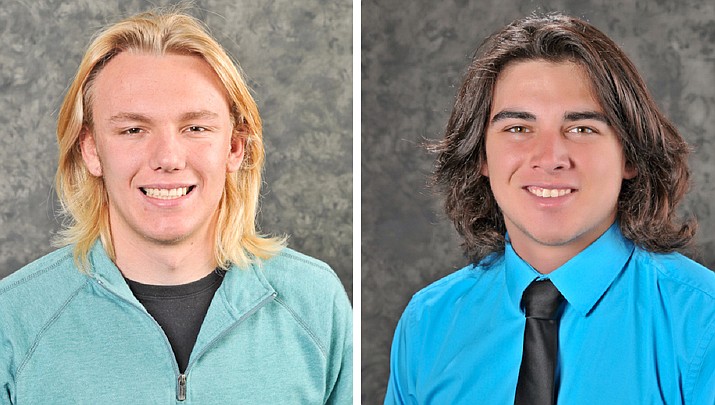 The deaths of 19-year-olds Gunner Bundrick, left, and Jake Morales have been ruled an accidental overdose of illicit drugs and fentanyl intoxication, according to a Yavapai County Medical Examiner report. Both men were 2017 graduates of Bradshaw Mountain High School, and heavily involved in athletics. (Courier file photos)

The deaths of 19-year-olds Gunner Bundrick and Jake Morales have been ruled an accidental overdose of illicit drugs and fentanyl intoxication, according to a Yavapai County Medical Examiner report obtained by The Daily Courier.

The two men were found unresponsive by a family member in the Bundrick family’s Prescott Valley home the morning of Saturday, Nov. 3. Central Arizona Fire & Medical Authority (CAFMA) paramedics responded to a 911 call at 11:15 a.m. and both men were pronounced deceased at the scene a few minutes later.

In an interview Thursday, Sgt. Jason Kaufman of the Prescott Valley Police Department (PVPD) said the investigation revealed that Bundrick and Morales left the home at 10 p.m. Friday, Nov. 2, to attend a party, then returned at approximately 3:48 a.m. the morning of Nov. 3. The last either of the two men were seen alive was around 5 a.m.

According to Yavapai County Medical Examiner Ann L. Bucholtz’s report, both men died due to a combination of illicit drugs, fentanyl and 4-ANPP intoxication. The precursor chemical 4-ANPP is a primary ingredient for manufacturing deadly fentanyl.

Bundrick and Morales were 2017 graduates of Bradshaw Mountain High School, and were involved heavily within the athletic community. Bundrick was captain of the Bears’ football and baseball teams as a senior. Both were attending Yavapai College and Bundrick was a member of the Roughrider baseball team last spring.

According to PVPD, in the first half of 2018, there were 42 fatal overdoses related to drugs in Yavapai County. There were 49 in all of 2017.

In Yavapai County, the PANT taskforce reported a 42 percent increase in fentanyl related arrests and seizures compared to 2016 and 68 percent of PANT related arrests involving fentanyl were specifically mimic pills, which are pills labeled as a prescription drug to mask their illegal contents.