The Launch Pad embarking on a big dream — a home of its own
Prescott center prides itself on being a free, safe haven for all teenagers 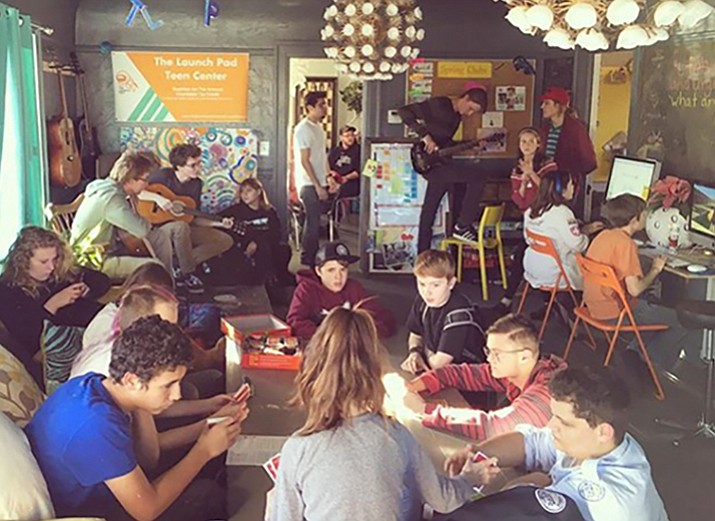 A full house on a regular weekday drop-in at The Launch Pad Teen Center. The center is open from 3 p.m. to 6:30 p.m. all days, except Wednesdays when it is open at 1:30 p.m. for early-release school days. (Courtesy) 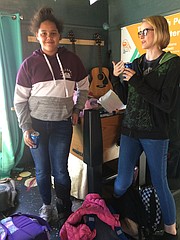 The Launch Pad Teen Center prides itself as a safe haven for all teenagers in the Prescott/tri-city area.

On any given day, some 40 students between the ages of 12 and 18 from district, charter and private schools crowd into leased space at Prescott College to do everything from painting and art workshops to hanging out and conversing with peers about current events, or playing a board game together.

The center hosts weekend musical events where teens are able to perform or simply enjoy their generation’s brand of entertainment. The center now also offers a tutoring and homework lab as well as an academic mentoring program.

In the almost five years since the center was birthed by the investment of founder and Executive Director Courtney Osterfelt, the Launch Pad has become a mainstay for many teens. The center offers free afterschool space where teens interact with adults who offer them unconditional care and respect while holding them accountable for their thoughts, actions and need for civic engagement. For teens that may feel disenfranchised, or questioning their identity, the center has become a place to explore those issues and concerns. The center, too, engages teens in assorted civic projects and across the school year hosts series of teen-related issue programs for parents and other community members.

Always seeking to expand what they can offer, including life skills and career-oriented opportunities, Osterfelt and the Launch Pad Board of Directors and staff have long wished to find a permanent home well-suited to the center’s teen-centric mission. Since its inception, the center has outgrown three different spaces — it started with a handful of teens in a classroom at the Granite Peak Unitarian Universalist Church and now serves couple thousand teens through its various year-round programs in a cozy house-like space on Grove Avenue rented from Prescott College.

That vision is about to become a reality — the Launch Pad has embarked on a recurring giving program it calls Ground Control that, combined with a capital campaign, will enable the center to keep what it has even as organizers work to buy its forever “home” for teens today and tomorrow. The first Ground Control members are: Patriot Windows; Findlay Auto Subaru; Realtor Cody Anne Yarnes and her husband, Michael, the Launch Pad’s first board president; Joy Hansen, Certified Life Coach for High Achieving Women; Turning Point Homes, and Guild Mortgage.

The Launch Pad is in the process of buying a warehouse building downtown that will be retrofitted into a two-story facility suited to allowing the center do what it does now and so much more. In a back corner of the space will be a teen-operated business, “Moon Coffee,” a venture to be launched thanks to a $10,000 social enterprise grant from the United Way of Yavapai County. The grant was one of four such awards given to area nonprofits last spring to enable individuals to gain marketable work skills while generating revenue to bolster their programs.

The intent is to grow the Ground Control corps of at least 100 business and individual donors by the close of 2018, Osterfelt said. The hope is that with such steadfast support the center becomes cemented into the fabric of community life — showcasing to all the need to embrace and enrich teen lives so they are equipped to become the leaders of tomorrow, affirmed Osterfelt and Deputy Director Laura Tully.

Though the time frame and details for the campaign and purchase are still a bit fuzzy, Launch Pad’s clientele are delighted that the effort is being made to give them space that will be inviting to even more teens and enable the center to make real even bigger dreams, center members said.

“It’s a little crowded here,” says Prescott High School sophomore Skylar Becker, a regular, to the chuckles of other teen guests on an afternoon right after bus drop off as they filter in through the front door into a living room-style space that quickly fills so that there are folks on the floor and in all corners.

Though a new space might not be ready until sometime next year, the teens are delighted with plans that include an art studio, a stage for musical and theatrical productions, as well as meeting rooms and an expanded tutoring center.

“It’s going to be really cool,” said Nuevah Rabun, an eighth-grader who likes where they are now but is eager to see the center’s reincarnation. “I’m excited about the new coffee house.”

Talk of the plans, and efforts to execute them, have energized the staff and teens alike, Osterfelt said.

“As Ann Frank said, ‘No one has ever gone poor from giving.'

Launch Pad founder/director guides students in finding their fire
Local nonprofit responds to federal cuts to after-school programs
The Launch Pad launches capital campaign for a home of its own
Teen Center supporters plan ‘launch party’ for campaign to renovate warehouse into new home
Column: Launch Pad: Be an ‘upstander’ rather than a ‘bystander’