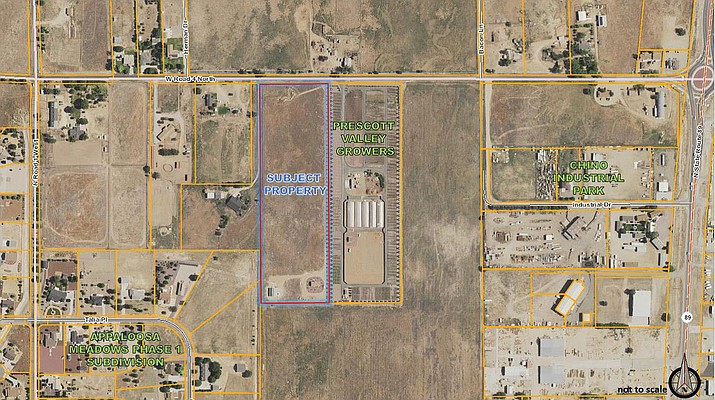 The Chino Valley Planning and Zoning Committee tabled a couple of controversial rezoning requests at its meeting Tuesday, Nov. 6.

If approved, 2.71 acres of property at 868 E. Road 4 North would change from Single Family Residential to Commercial Light, allowing for a wholesale nursery, and 12.35 acres of single-family residential use would be allowed within the commercial light zoning through a conditional use permit.

The property’s owners, Donald and Catherine Cox, own a wholesale nursery adjacent to the first property, said planner Alex Lerma. It is a growing facility with no outside sales or customers coming in or out, and anything ordered goes to Prescott Valley Growers, which they also own, Lerma said. Further, the site will reflect the first property with an area for greenhouses and a buffer of trees surrounding it, he said.

The reason for Commercial Light zoning is because, looking at the code, nurseries are identified only in that specific zoning district, and the closest thing within the Agricultural/Residential zoning district is probably greenhouses, Lerma said.

It would also give Cox the opportunity to open the nursery to the general public in the future if she desires, though that is not her plan at this time, he said. At the same time, once the property becomes Commercial Light, it will be approved for anything within the Commercial Light zoning district, Lerma said.

This possibility is the reason residents William Kidd and Camin Kidd voiced their concerns. William Kidd said he opposes the rezoning not because Cox wants to put in an additional nursery, but because opening it to commercial zoning would mean it stays commercial.

“She sells that lot, it’s now a restaurant, a strip mall, whatever you want to put in there,” he said.

“What’s intended today can change tomorrow,” she said. “If that is zoned Commercial Light, it opens up that property to a variety of uses including, but not limited to, retail, restaurants, pawn shops, business and professional, gas station, hotel, hospital, shooting range, billiard parlor, veterinary clinic. There’s a number of uses also permitted.”

A conditional-use permit could also be issued for an auto mall or drive-in theater, which are nonconforming uses for the residential neighborhood where the property is located, Camin Kidd said.

William Kidd said he is not an attorney or city planner, but it could be conceivable to make use of a conditional-use permit to allow the nursery but would not allow other future commercial development if the nursery goes away. A variance also could be a solution, allowing the nursery to expand and continue while removing the future threat of commercial use, Camin Kidd said.

The matter was moved to a future meeting so the Planning and Zoning Commission could study it further and obtain more information. The reason it was not brought in as a study session item is because staff thought it was a clear cut recommendation, said Public Works Director Frank Marbury.