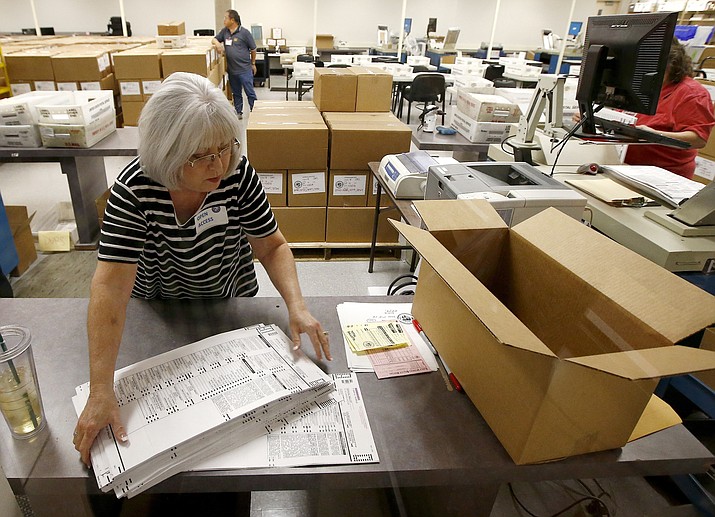 PHOENIX — Unless the trend in election returns shift — and soon — Arizona will get its first Democrat in the U.S. Senate in decades.

And the state Republican Party may be laying the groundwork for a legal challenge to stop that from happening.

More to the point, Sinema is out-polling McSally in Maricopa County, the state’s largest, by close to 4 percent.

Maricopa County Recorder Adrian Fontes reports he still has another 198,000 ballots to tally. And assuming the current split among Sinema, McSally and Green Party candidate Angela Green continues, Sinema will pick up 99,000 of those to about 95,400 for McSally.

McSally had gained some ground with new reports from several rural counties. But that hasn’t been enough to offset how Sinema is doing elsewhere.

For example, Sinema is getting four votes for every three for McSally in Pima County. That is not unexpected, given the voter registration edge Democrats have there.

But it has been the vote tally out of Maricopa County that has alarmed the state GOP.

In a letter Saturday, party attorney Kory Langhofer demanded copies of all communications between Fontes’ office and Sinema, her campaign and what he essentially considers her perceived allies like billionaires George Soros and Tom Steyer.

That demand follows the decision of Fontes to allow “emergency voting’’ on the Saturday and Monday before the election by people who said they could not show up at the polls on Tuesday. Fontes, along with Pima County Recorder F. Ann Rodriguez who also has allowed the practice, said the practice is authorized by state law.

And state GOP Chairman Jonathan Lines continues to complain about Fontes allowing people who voted by mail but whose signatures on the envelope do not match county records to “cure’’ the problem by contacting the recorder’s office.

A lawsuit about that practice in Maricopa and Pima counties was settled Friday with officials from other counties — presumably ones with more Republican votes — agreeing to implement the same “curing’’ procedure through Wednesday, Nov. 14. But that did not stop Lines from lashing out at Fontes, a Democrat, who was elected two years ago by beating Republican Helen Purcell.

“He is a liberal activist masquerading as an election official, and we cannot trust him to oversee this process,’’ Lines said in a prepared statement. “Arizonans have a right to know what liberal parties Fontes is communicating with about this race and what he is telling them.’’

A spokeswoman for Fontes said he has seen the public records request and will be reviewing it. He declined to respond to Lines’ attack.

GOP claims of irregularity aside, there are several reasons that Sinema may be doing better than McSally, even in a state where Republicans outnumber Democrats.

One of those is that independents also outnumber Democrats. And Sinema waged a careful campaign of trying to distance herself from her party, to the point of saying she has voted for things that President Trump wants 62 percent of the time and even declining to mention her party affiliation in her commercials.

McSally, by contrast, waged a campaign aimed at deep party faithful, boasting of her loyalty to Trump.

And then there’s the changing demographics of the state.

The GOP stranglehold on both U.S. Senate seats since 1994 isn’t the only race that is trending towards the Democrats.

Republican Frank Riggs, who was proclaimed the winner of the race for superintendent of public instruction by Associated Press on election night, now finds himself trailing Democrat Kathy Hoffman by more than 42,000 votes.

Hoffman, a speech therapist in the Peoria Unified School District, has capitalized on the #RedforEd movement that also has provided votes for others in public education. It was that same wave that resulted in voters overwhelmingly vetoing 2017 legislation approved by the Republican-controlled Legislature and signed by Gov. Doug Ducey to expand who is eligible for vouchers of tax dollars to send children to private and parochial schools.

Along the same lines, Democrat Christine Marsh, the state Teacher of the Year in 2016, has used that support for public education to come within 617 votes of veteran Republican Sen. Kate Brophy McGee, who is trying to hang on to her seat in the state Senate.

Sandra Kennedy, a former member of the Arizona Corporation Commission who is angling to get back on the utility regulatory panel, now is out-polling both incumbent Republican Justin Olson and fellow Republican Rodney Glassman. But at this point it looks like at least one of the Republicans will get elected to the two open seats. Democrat Kiana Sears, who ran on a ticket with Kennedy, is far behind in fourth place.

Some other races also hang in the balance, including secretary of state. Democrat Katie Hobbs, who on Thursday was trailing Republican Steve Gaynor by 19,000 votes, now has narrowed the gap to less than 3,200.

But there are unlikely enough uncounted votes statewide to affect the re-election of Republican Mark Brnovich as attorney general, with him leading Democrat January Contreras by nearly 93,000.

The voting trend in favor of Democrats is having ripple effects up and down the ballot.

In Pima County, incumbent Republican Rep. Todd Clodfelter is running a distant third to the two Democrats campaigning for the two seats in the state House.

Absent last-minute changes, the Republican edge in the state House will shrink to 31-29 from 35-25.

Republican House Speaker J.D. Mesnard also faces a rough ride in his bid to move to the Senate, with Democrat Steve Weichert coming within 1,900 votes out of close to 82,000 votes already tallied.

The Senate, for the moment, remains 17-13 Republican, though the outcome of Brophy McGee’s race with Marsh and the Mesnard-Weichert contest could change that.