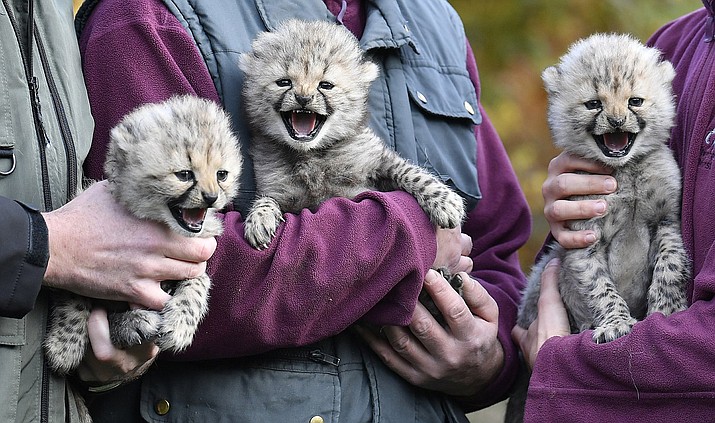 Keepers present three little baby cheetahs at the zoo in Muenster, Germany, Friday, Nov. 9, 2018. The triplets were born on Oct.4 2018 and start to explore their enclosure today. The zoo in Muenster is well known for the successful cheetah breed, about 50 of the endangered animals were born in the zoo since the seventies. (AP Photo/Martin Meissner)

Cheetah mother Isantya looks at its three little babys at their enclosure at the zoo in Muenster, Germany, Friday, Nov. 9, 2018. (AP Photo/Martin Meissner)

BERLIN — Three cheetah cubs have made their public debut at a zoo in the German city of Muenster, just over a month after they were born.

Mother Isantya kept a close watch on the three female cubs as they took their first steps in their outside enclosure on Friday.

The cubs were born on Oct. 4. They are the first offspring of Isantya, who moved to Muenster from Paignton, England last year. Father Jabari, who arrived from Salzburg in 2011, already has several young.