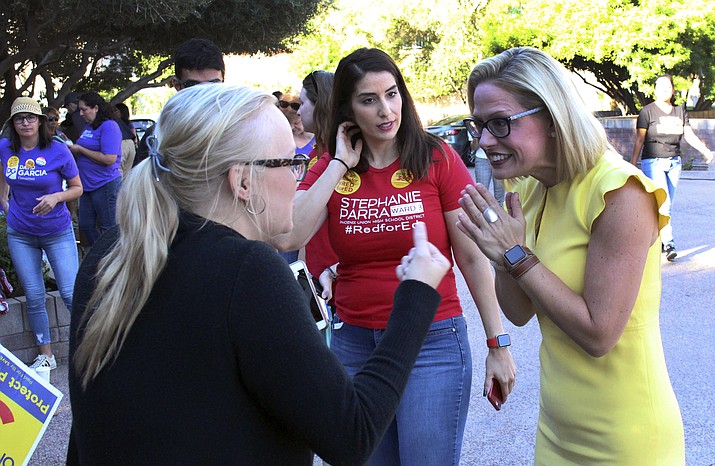 In this Nov. 3, 2018, file photo, a supporter crosses her fingers as she talks with Kyrsten Sinema, right, at a get-out-the-vote event at the Arizona Education Association headquarters in Phoenix. (AP Photos, File)

PHOENIX — The latest returns from the state’s two largest counties have given Kyrsten Sinema the lead in her bid for the U.S. Senate — barely.

New figures late Thursday from the Secretary of State’s Office find the Democrat has opened up a 2,106-vote edge over Republican Martha McSally. That is a sharp reversal from just 24 hours earlier when Sinema trailed by about 15,000.

Those newly counted ballots also have given Democrat Kathy Hoffman the lead in her race for state superintendent of public instruction. She is now up by 11,840 over Republican Frank Riggs; a day ago he had 7,200 more votes than she did.

The change in fortune comes as the Arizona Republican Party and four of its county affiliates are trying to get a judge to block election officials in Maricopa, Pima, Coconino and Apache counties from counting some late-cast early ballots. Voters in those four counties all were breaking for the Democrat contenders.

At the same time, the Arizona Democratic Party filed its own lawsuit against Maricopa County in a bid to boost the Democrat edge there even more by helping to “rehabilitate’’ some ballots that were set aside for a variety of reasons, like lack of identification.

As of Wednesday, Sinema had only an 8,000-vote edge in the county. But by the end of the day that had tripled, giving her more cushion to offset the lead that McSally has in 10 of the state’s 15 counties.

Sinema, who currently represents a congressional district that takes in portions of Phoenix, Tempe and Chandler, also boosted her lead over McSally in Pima County by about 7,000, up to more than 44,000, even though McSally’s district includes the eastern portion of Pima as well as Cochise County.

The McSally camp indicated late Thursday it was not worried, saying it believes the latest batch of ballots to be counted arrived at the Maricopa County Recorder’s Office on days when Republican early voting turnout was low. They contend the trend will change when the county gets to the approximately 200,000 early ballots dropped off on Election Day based on their belief that many Republicans who had requested early ballots had not turned them in before.

The change of fate for Hoffman also got a boost from Maricopa County, where she opened up a lead of more than 22,000, along with her now having a 55,000-vote edge in Pima County. Here, too, those strong numbers from the two largest counties helped offset the fact that Riggs out-polled her in 10 counties.

That big dump of heavily Democratic votes in Maricopa County also breathed some new life into the hopes of the party to win a new seat in the state Senate.

Incumbent Sen. Kate Brophy McGee, R-Phoenix, now has a lead of a mere 808 votes over Democratic challenger Christine Marsh; that’s close to half of just a day ago.

What makes that significant is that Maricopa County Recorder said late Thursday he still has about 345,000 ballots left to be processed, with perhaps 48,000 in Pima County. If the trend continues, that will boost the leads of Sinema and Hoffman.

The Maricopa numbers might even provide enough votes for Marsh to oust McGee. And if that happens, the Republican margin in the state Senate will be reduced from 17-13 to 16-14.

The new ballots also have increased the chances that Democrat Jennifer Pawlik has of getting elected to the state House. On Wednesday she was up over her nearest Republican challenger by fewer than 500; that figure has now tripled.

They also represent bad news for incumbent Rep. Maria Syms, R-Paradise Valley, who seeks to hold onto her seat. Democrat Aaron Lieberman now has doubled his lead over her, with about 1,500 more votes.

In Pima County, the latest count also puts incumbent Rep. Todd Clodfelter, R-Tucson, further behind in his bid for re-election. He now trails Republican Domingo DeGrazia by about 2,700 votes.