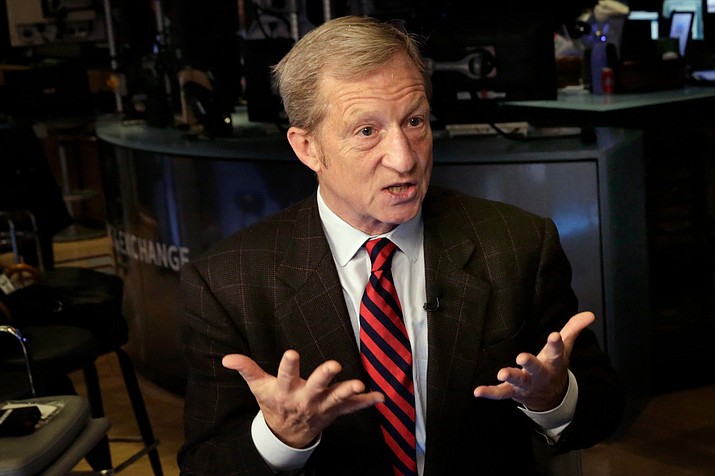 Tom Steyer is interviewed on Cheddar on the floor of the New York Stock Exchange on April 2, 2018. Steyer spent millions to get Prop. 127 passed in Arizona. (Richard Drew/AP, file)

PHOENIX - A $31 million campaign by the state's electric utilities proved enough to keep voters from adopting a constitutional mandate that they generate at least half of their power from renewable sources by 2030.

Early returns show Proposition 127 going down to defeat despite about $24 million being spent on its behalf, largely from California billionaire Tom Steyer.

The current standard, established by the Arizona Corporation Commission, is for utilities to get to 15 percent by 2025. That standard has not changed since 2006.

Other states around Arizona have adopted more aggressive goals.

California already is requiring its utilities to get to 50 percent by 2030.

Arizona Public Service was at the forefront of the opposition amid disputed claims that requiring "renewable'' energy versus "clean'' energy would endanger operation of the Palo Verde Nuclear Generating Station. APS operates the plant but owns just 29.1 percent of it; Salt River Project, which owns another 17.5 percent, is unaffected by the initiative.

Andy Tobin, a member of the commission, has his own plan for an 80 percent "clean energy'' standard, something that would allow APS to take credit for its nuclear power. But that would not kick in until 2050 and Tobin has been unable to date to get other commissioners to go along.

Money raised to convince Arizonans to constitutionally bar the Legislature from ever expanding the state's 5.6 percent sales tax to services apparently also paid off.

Financed by state and national Realtors, proponents of Proposition 126 claimed that "politicians are plotting'' to raise more money with a sales tax on services. Left out of all that is that lawmakers already are free to do that and have not; one bill to expand the tax base to repair and maintenance of cars, homes and personal property was stillborn.

Opponents had nowhere near the $10 million the Realtors had set aside and in fact were soliciting $10 donations as recent as Friday.

They sought to make the argument that it makes no sense to remove one option from the toolbox of places to raise revenue. If nothing else, foes said, it could preclude the ability of state lawmakers from using any funds raised on a tax on services to lower other sources of revenue, like income taxes.

The issue was one of the few on which incumbent Gov. Doug Ducey and challenger David Garcia could agree: Both opposed the measure.

Voters approved Proposition 306 which was sold to voters as preventing candidates who get public funds for their campaigns from giving the dollars to political parties and other outside groups.

Introduced and pushed through by Republican lawmakers, the proposal was in reaction to the fact that the Citizens Clean Election Commission allows candidates to buy services from outside groups. Supporters of the ballot measure said that effectively has public dollars subsidizing political parties.

The bipartisan commission defended the practice, saying there are sufficient safeguards to ensure that the dollars are being spent only for legitimate services.

But the potentially more far-reaching aspect of Proposition 306 - one not widely publicized by proponents - was designed to require the commission to get approval of the Governor's Regulatory Review Council for any changes in rules.

This is crucial as the Republican-controlled Legislature has repealed laws requiring "social welfare'' groups that seek to influence Arizona elections to disclose the source of their funding.

The commission, however, has its own requirements for disclosure. And because the commission was created by voters, lawmakers cannot alter its powers.

What Proposition 306 proposed was a work-around.

Instead of asking voters to rescind the commission's disclosure rules -- a likely non-starter among voters -- it sought to amend the law that created the commission to require its rules to be reviewed by GRRC. And that panel is made up entirely of people appointed by Gov. Doug Ducey who has been a supporter of removing disclosure requirements.

Voters also agreed to amend a section of the Arizona Constitution dealing with pension benefits for state employees.

The change sought in Proposition 125 is a bid to bring some more financial stability to the plans that now cover active and retired corrections officers and elected officials. In essence, it would change the method of providing annual pension benefit increases to link it to the cost of living.

It had to go to voters because the state constitution currently prohibits anything that diminishes pension benefits for public employees.

5 statewide propositions on ballot; what are they all about?
APS’ spending spree grows to more than $30M in Prop 127 fight
Prop 127 split is without evidence
Letter: RE: Arizona Pocketbooks
Fight over Prop 127 becoming most expensive in state history