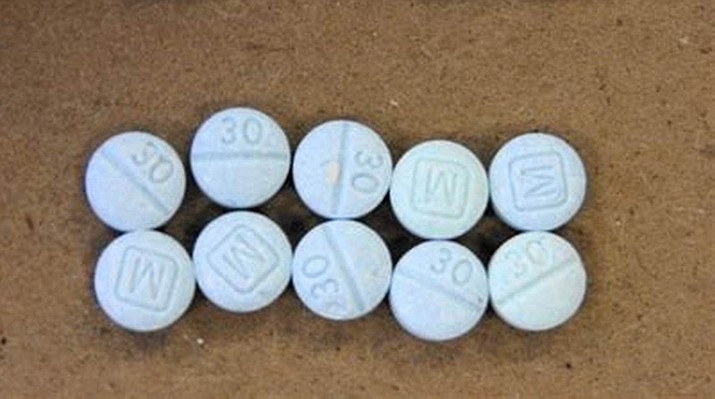 Within the last week, PANT detectives have also seized several capsules that are believed to contain fentanyl and lab testing is pending to confirm the content, according to a Yavapai County Sheriff’s Office news release.

According to drugabuse.gov, Fentanyl is a powerful synthetic opioid analgesic that is similar to morphine but is 50 to 100 times more potent.

Non-pharmaceutical Fentanyl is sold in the following forms: as a powder; spiked on blotter paper; mixed with or substituted for heroin; or as tablets that mimic other, less potent opioids.

The drug works by binding to the body’s opioid receptors, which are found in areas of the brain that control pain and emotions. Its effects include euphoria, drowsiness, nausea, confusion, constipation, sedation, tolerance, addiction, respiratory depression and arrest, unconsciousness, coma, and death.

The high potency of Fentanyl greatly increases risk of overdose especially if a person who uses drugs is unaware that a powder or pill contains Fentanyl.

“Even a small dose of Fentanyl can cause the user to overdose or die, and such incidents have occurred in Yavapai County in recent months,” said Yavapai County Sheriff’s Office spokesperson Dwight D’Evelyn.

The tablets being seen have no visible indication as to their content, D’Evelyn said.

“YCSO, its law enforcement partners and MatForce, urge families to talk now about the dangers of drug use,” D’Evelyn said. “With Fentanyl-laced pills available in our community, it is very important that teens understand the life-threatening risk of sharing pills at parties, and how drug experimentation can have fatal consequences. You can help stop this drug epidemic from claiming more lives of those we love.”

Kiley DeMond, a Prescott resident who lost her 20-year-old son to a Fentanyl overdose three years ago, echoes this warning and believes it’s paramount for parents to help their children understand just how dangerous and uncontrolled fentanyl is.

PANT investigations are ongoing with the goal of arresting suspects involved in the distribution of this poison. As investigations conclude, the Sheriff’s Office will provide updates on specific cases as to what has been seized and any arrests.