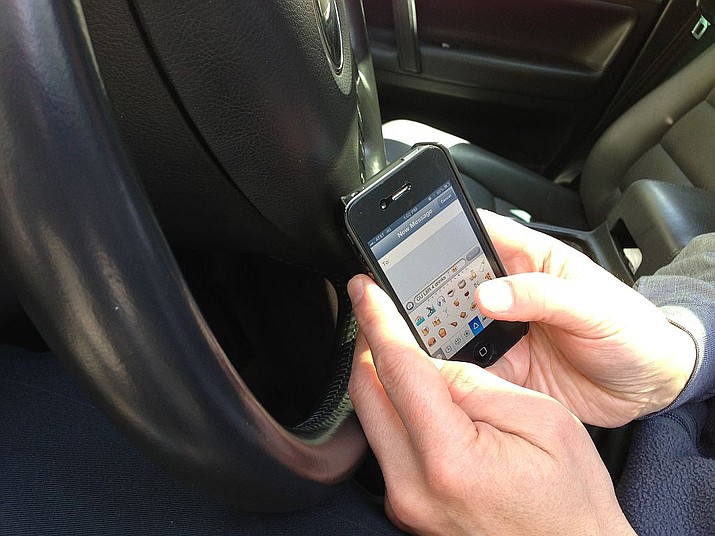 The Chino Valley Town Council voted unanimously for proceeding with drafting an ordinance banning using a cellphone or other portable communications devices while driving. (Wikimedia Commons/Courtesy)

In the wake of Yavapai County and the City of Prescott passing ordinances banning the use of cellphones and other portable communications devices while driving, the Chino Valley Town Council directed the Chino Valley Police Department to proceed with drafting a similar ordinance.

Citing statistics from the National Transportation Safety Board at the regular town council meeting Tuesday, Oct. 23, Chino Valley Police Chief Charles Wynn stated nine people are killed and 1,000 are injured daily due to distracted driving. Wynn also said he was taken back by the statistic detailing how much distance a person can cover in five seconds at 55 miles per hour.

“If you think about the time it takes you just to read a text, you can cover a football field or maybe longer,” he said.

Texting and driving, or using any kind of portable device that can distract a person while their driving, is a public nuisance and a danger to everyone on the road and others walking alongside the roads, Wynn said.

Chino Valley police officers can cite under the Yavapai County ordinance, though both the officer and driver would be required to go to court in Prescott if the ticket is challenged, Wynn said.

“It’s inconveniencing our (residents) as well as the officers taking the time to drive over there,” he said. “Being able to handle this in Chino would be a lot more efficient.”

Further, Wynn said Chino Valley is an island within Yavapai County and it can be confusing to have a patchwork of ordinances. However, a person can still be cited under the county ordinance by the Yavapai County Sheriff’s Office in the limits of the town for using a cellphone while driving, said Yavapai County Supervisor Craig Brown.

The council voted unanimously for the direction to proceed with drafting a town ordinance banning the usage of a cellphone or other portable communications device while driving.

Once the ordinance has been drafted and enforcement begins, it would be a phased-in enforcement with warnings for a month or more to get people aware of what’s going on, Wynn said. It would be a primary offence and a civil violation, he said

“You can be pulled over for this as a primary offence, so you don’t need another offence like a seat belt to pull somebody over,” Wynn said. “Under this, the officer would actually have to see them with a device … if the officer observes it, they can pull them over strictly for that.”