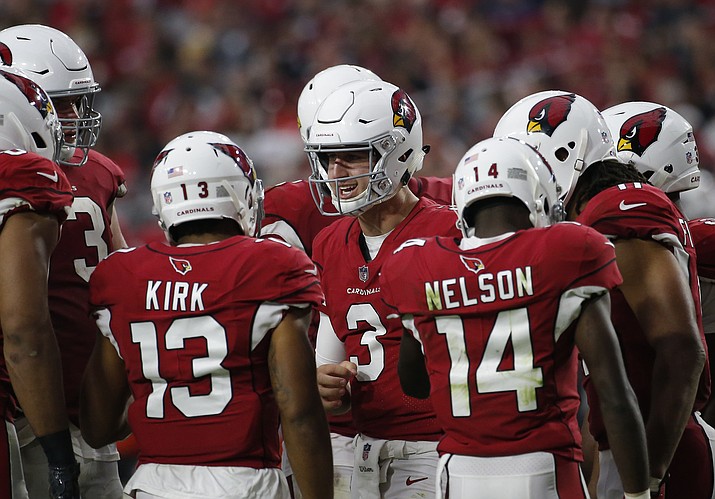 TEMPE — When the season started for the Arizona Cardinals, Sam Bradford was the quarterback and Mike McCoy was offensive coordinator.

Now both are gone.

On Saturday, while the team was enjoying a long weekend off, the Cardinals released Bradford, who lost his starting job after three games to rookie Josh Rosen and had been inactive for the last five. Bradford's departure came a little less than two weeks after McCoy was fired and replaced by quarterbacks coach Byron Leftwich.

Coach Steve Wilks said Monday that in releasing Bradford "we did what we thought was best for the team. We needed that position to be able to add quality depth at different positions."

The Cardinals made several roster moves during their bye week. Last week, they signed tight end John Phillips and offensive lineman Colby Gossett. Gossett was signed off the Minnesota practice squad. On Monday, Arizona signed offensive lineman Zack Golditch from the Indianapolis practice squad. The team also re-signed wide receiver Kendall Wright, who had a 10-day stint with the team in October.

Arizona was looking to add depth on the offensive line even though all five starters might be healthy enough to play Sunday at Kansas City. John Wetzel, a backup at both tackle and guard, was placed on injured reserve Saturday with a neck injury.

Right guard Justin Pugh said he is hoping his broken hand will be healed enough for him to play Sunday, which would be four weeks from the day he injured it.

The Cardinals (2-6) are coming off a come-from-behind win over San Francisco but face a much more daunting challenge against the Chiefs (8-1), who opened as 15-point favorites with the advantage moving to 16 ½ points on Monday.

"Dynamic in every area," Wilks said of the Chiefs, "particularly on the offensive side of the ball. (Patrick) Mahomes is playing outstanding, an MVP-caliber player right now, and all the weapons around him. Again, it's just about trying to eliminate the big plays, and that's what they're known for thus far this year is just creating big plays over the top. We've got to try to eliminate that."

It's the first of several difficult road challenges for Arizona in the second half of the season. The Cardinals also play at Atlanta, Green Bay and the Los Angeles Chargers.

Arizona's practice Monday was its first since last Tuesday. A workout had been scheduled for last Wednesday but Wilks cancelled it.

"A lot of injuries, I wanted to be able to give the guys an opportunity to recover," he said.

Despite the long weekend, Arizona got an extra day of practice this week. Players have Tuesday off before returning to their regular Wednesday-Thursday-Friday practice schedule.

It gives Leftwich a little extra time to work on the offense, which slogged through three quarters before Rosen threw two TD passes in the fourth-quarter in the 18-15 win over San Francisco.

"I think it was very beneficial," Wilks said. "I'm out there, and I'm watching the flow of practice. I'm seeing it in action with Josh and the things that they're doing. Not really to indulge a lot in the game plan, but you can see Byron trying to evolve and move this offense in another direction. I think the bye week was very beneficial to him, as well as to the offense."

"He's such a smart mind and he's just really good at putting his guys in the right position," Kirk said.