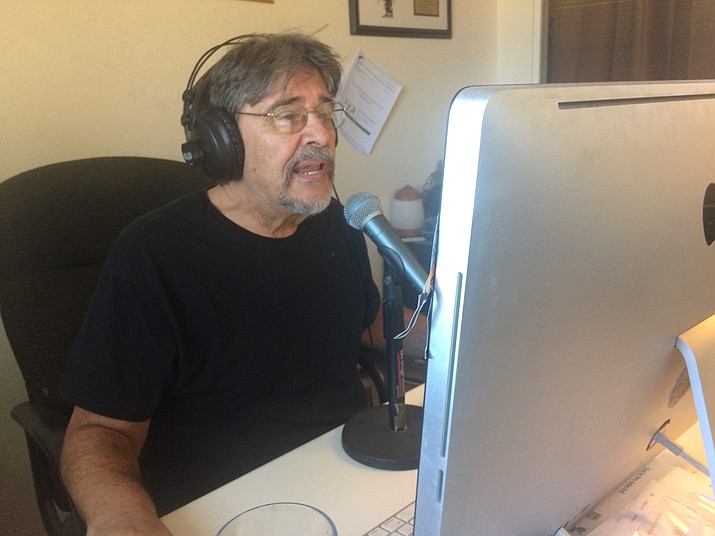 Tom Agostino recording for “The Folk Sessions” at his home in Chino Valley. (Jason Wheeler/Review)

“Welcome to ‘The Folk Sessions,’ where the finest folk and acoustic musicians come to play …”

Those words, spoken by host Tom Agostino, kick off every installment of “The Folk Sessions” on Saturday afternoons. This December marks 16 years for the show.

It all began when Agostino moved to Prescott 17 years ago. The seeds were sown when he was introduced to Alexa McDonald, who would host music gatherings every month and sprouted after that year’s Folk Music Festival at Sharlot Hall Museum. Agostino hosted a stage at the festival and got each musician on that stage to be interviewed on the K-JAZZ Radio Network. Once the festival was over, he went to the station’s general manager and pitched a live music show.

“I said ‘you know, this is an incredible community up here … you have incredible musicians for a small area. You should do a live music show’ and he goes ‘when can you start?’ ” Agostino said. “I went to Alexa and I said ‘you know every musician in Arizona and you’re very, personable. Would you want to do a radio show with me?”

From there, “The Folk Sessions” was born.

In the past, the show was broadcast from various locations in downtown Prescott, but these days Agostino records it from his Chino Valley home. MacDonald has since moved to Portland, Oregon, where she is now the artistic director for Artichoke Music.

Over the years, Agostino said he’s had the opportunity to talk to and interview numerous musicians, many of whom are big names such as Ronny Cox, Tom Chapin and Carrie Rodriguez. He said he remembers the first time he met Chapin who was doing a benefit show with his partner at the time. In an interview before the show, they sang “Cats in the Cradle” together, something he’ll never forget, Agostino said.

The radio show used to be two hours long, compared to the current half-hour show, and Agostino said he believes part of his success has been because he’s never tried to get bigger than himself. All he wants to do is bring in good music and put on concerts with musicians that he thinks people will enjoy hearing, he said.

“I’ve been here long enough that ‘The Folk Sessions’ has made an imprint in Prescott, especially in the music community,” Agostino said. “I’m seeing that when I go places, people know who I am or they know about the show.”

In all, it’s stayed true to his belief that music is something you should enjoy rather than using the show to change the world, he said.

Agostino’s anniversary show is already planned out for Saturday, Feb. 9, 2019. Normally, his anniversary shows are at Prescott Center for the Arts, but this one is going to be at the Elks Theatre and Performing Arts Center and he’ll be calling it “The GIANTS of Folk,” Agostino said. The host is going to be Art Podell, a historian of the folk scene who formed the New Christy Minstrels with Randy Sparks and who was roommates with Peter Yarrow of Peter, Paul and Mary. Podell introduced Yarrow to Mary Travers, Agostino said.

“It’s going to be so cool,” Agostino said.

Tickets should be on sale around Thanksgiving, he said.

Looking ahead, Agostino said one thing he wants to do is create a “Folk Sessions” podcast network.

“I would like to host several podcasts under the ‘Folk Sessions’ banner,” he said, adding one idea he has is to start a Prescott Area Arts and Humanities Council podcast and that he “would love to do a political podcast like the ‘Pod Save America’ guys.”

In the meantime though, “The Folk Sessions” can be heard every Saturday at 2:30 p.m. on the K-JAZZ radio network, 89.5 in Williams and Flagstaff; 90.1 in Prescott; 90.7 in Kingman and 91.3 in Flagstaff, as well as on Soundcloud at www.soundcloud.com/folksessions.