Manieri: Maybe we should try listening, for a change 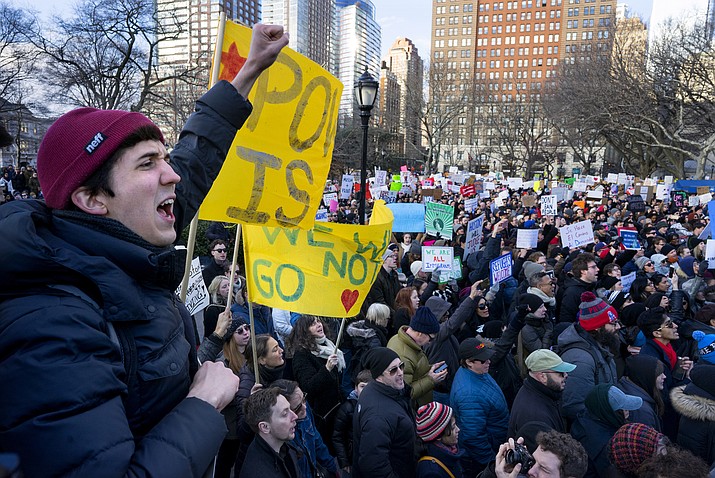 It might be that our political discourse is what it is because those involved are satisfied with the status quo.

The rest of us spend a lot of time wringing our hands over the apparent impossibility to find common ground on any important issues, at least until we realize that the loud voices on both the right and left aren’t really all that interested in compromise.

Political tribalism is evidently more comfortable and satisfying than actually trying to work through and find solutions to intractable problems.

Psychologists have a term for this phenomenon. It’s “reactive devaluation.” A June article in Psychology Today put it this way: “Once we discover it was the other side who said or supports something, then we withdraw or withhold our support. It doesn’t seem to matter what was said or proposed.”

That certainly explains a lot.

And it explains why, as we’re still recoiling in horror over the murder of 11 people at a Pittsburgh synagogue, we hear only demagoguery and no actual effort to reach across the aisle. No one can possibly accept a reasonable suggestion made by the other side, lest they be ostracized by their base.

Whenever there is a mass shooting, two solutions are immediately proposed: fewer guns or more guns. This debate, of course, has gotten us nowhere.

Can we begin by agreeing that neither the left nor right has the market cornered in inflammatory rhetoric?

Can we agree that President Donald Trump is no more responsible for the massacre in Pittsburgh than Democrats were for a gunman opening fire on Republican lawmakers at a baseball practice?

The desire to blame violence and abhorrent behavior on everyone other than the individual who made the conscious choice to engage in the behavior is irresponsible and somewhat ironic. You can’t decry the kind of hate that inspires such crimes and, at the same time, redirect hate toward your political opponents.

To my Democratic friends, I get it. You loathe Donald Trump. You don’t believe he’s fit to be president. His incessant tweeting is reckless, annoying and destructive. But none of that makes him responsible for every politically-tinted mass shooting.

And the media, in particular, should know better.

The report was an attempt to draw a line from Donald Trump and Republican pundits to the synagogue murders.

There was a day when speculation would never have made it into a news report, much less provide the foundation for such a report. But what the heck, let’s do a speculative story anyway because it fits our long-established narrative.

But before Republicans mount their moral high-horse, they too need to face some realizations.

Not every regulation is a threat to our Constitutional rights. Banning one type of weapon or accessory is not a slippery slope toward nationwide gun confiscation. You can go into a pharmacy and buy a variety of drugs. But you can’t buy every medication because some, such as chemotherapy drugs, are more responsibly administered by health care professionals.

How’s this for a compromise? Let’s ban the AR-15, one of the firearms used by the Pittsburgh gunman. Sure, there are plenty already in circulation and a violent criminal will likely find a way. But does it make sense to make it more difficult for someone with murderous intentions to get his hands on such a dangerous weapon? Sure, it does.

Democrats, are you willing to admit that just because someone bent on mass murder can’t purchase a specific weapon doesn’t mean they’re likely to forget the whole thing? You’ll just create a more resourceful criminal who will find another firearm, or make a bomb, or use a vehicle. Are you willing to take a deeper look at mental health and how social media provides a forum for the unhinged to sow the seeds of anger and hate? Are you willing to admit that Band-aid remedies such as buyback programs or worse, confiscation, will only disarm law-abiding citizens?

I’d like to believe compromise is possible. But to compromise, we have to listen. At the moment, we can’t hear one another over the shouting.

Rich Manieri is a Philadelphia-born journalist and author. He is currently a professor of journalism at Asbury University in Kentucky. His book, “We Burn on Friday: A Memoir of My Father and Me” is available at amazon.com. You can reach him at manieri2@gmail.com.

Manieri: Another election has come and gone. Now what?
Manieri: If only President Trump would channel George Costanza
Manieri: Self-examination would be a good start in response to mass shootings
Trumps pay tribute at synagogue where 11 were fatally shot
If Cubs win, rich uncle will be murdered