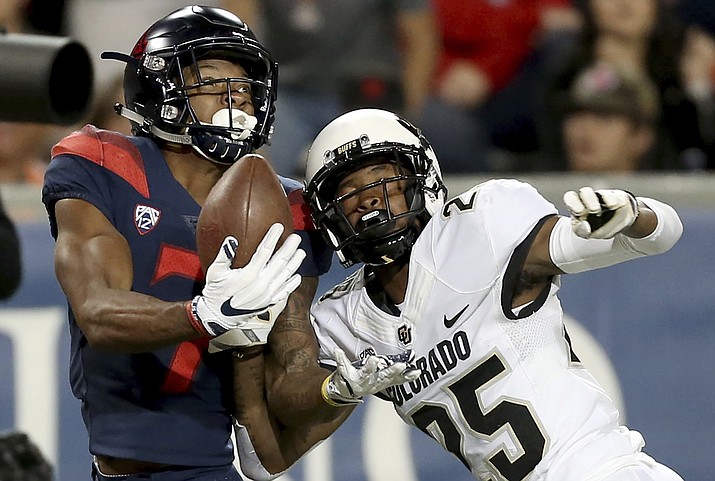 The Arizona quarterback took down the Buffaloes with his arm in the rematch.

Tate threw for career-high 350 yards and five touchdowns after setting an FBS rushing record against Colorado a year ago, lifting Arizona to a 42-34 victory over the Buffaloes Friday night.

"Khalil ran around and threw it up in the air, and their guys came down with it on long, delayed plays," Colorado coach Mike MacIntyre said. "Those are tough to stop."

Arizona's junior quarterback ran all over Colorado a year ago, setting an FBS record for a quarterback with 327 yards rushing. He used his legs to buy time and beat the Buffaloes with his arm this time, completing 17 of 22 passes, including a pair of touchdowns to Shawn Poindexter.

"Our offense, we haven't been as good the past few games and we knew we had to step up," Tate said. "The defense has been doing what they're doing and we knew we needed to improve."

J.J. Taylor provided balance to the Wildcats' offense, running for 192 yards on 40 carries to send Colorado (5-4, 2-4) to its fourth straight loss.

Steven Montez threw for 343 yards and three touchdowns, but had a late interception for the Buffaloes.

"What's kind of dragging us down is when opportunities present themselves, we've got to capture them, we've got to make them," Montez said.

Arizona's offense stagnated early and Taylor lost a fumble at the Wildcats' 7, setting up a field goal. Arizona also had a pair of miscues on special teams and K.D. Nixon scored on an 8-yard run to put Colorado up 10-0 after one quarter.

Once Tate got the Wildcats going, Colorado had a hard time stopping him.

Using his legs to buy time, he hit Stanley Berryhill III on a 40-yard touchdown pass, tossed a 1-yarder to Poindexter and 12 yards to Shun Brown for another score.

Two defensive breakdowns allowed Colorado to stay in it.

The first came when Montez caught Arizona on a blitz and found Kyle Evans on a 17-yard touchdown pass. Then Wildcats safety Jarrius Wallace missed on an interception attempt, clearing the way for Travon McMillian's 57-yard touchdown.

Lucas Havrisik hit a 55-yard field goal on the final play of the first half to put Arizona up 26-24.

Tate kept firing in the second half, hitting Poindexter on a 39-yard touchdown in the third, and Cedric Peterson on a 57-yard score in the fourth to cap the scoring.

Montez found Tony Brown on a 20-yard TD pass in the third, but threw an interception in the end zone with five minutes left.

Once considered a front-runner in the Pac-12 South, Colorado now must win one of its final three games just to become bowl eligible.

Arizona is clicking on offense at just the right time, moving within a game of becoming bowl eligible in its first season under Sumlin.

Colorado seemed to be in a bind with kicker James Stefanou missing his third straight game due to a hip injury and Evan Price not making the trip due to an illness.

Told he would play just the day before, Francis hit field goals from 48 and 25 yards, and made all four of his extra points in his first collegiate action — in a Pac-12 road game, no less.

"What he did today was pretty amazing," MacIntyre said. "That was sharp, that kid stepping up like that."

Arizona put itself in some tough positions due to a litany of penalties.

The Wildcats had 12 penalties for 129 yards, including multiple pass interference calls on deep balls. Colorado had five penalties for 52 yards.

Colorado plays at No. 10 Washington State next Saturday.

Arizona has a bye before facing the Cougars on Nov. 17.